Author and pastor Dr. Jeff Rhoades says in his new book, The Bible Dimensions and the Spiritual Realm, that based on the physics of the universe, heaven may be much closer than we think.

“The theory behind string theory is that subatomic particles (strings) make up the neutron, proton and the electron. These are small strands of energy. They’re not material; they’re energy,” Dr. Rhoades told God Reports.

The vibration of the strings governs the type of particle. “The particles determine what kind of atom they are. So the theory behind is everything in the universe is made up of energy. It is electrical, magnetic energy,” he notes.

While we live in the three-dimensional, observable world, Einstein’s general theory of relativity treats time as a fourth dimension — 4D spacetime. 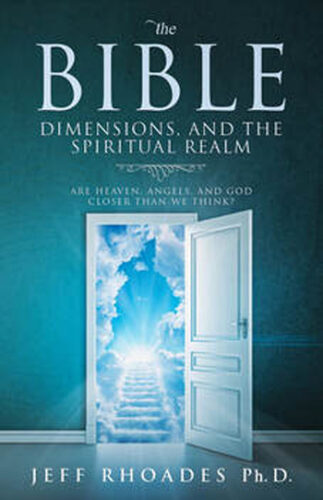 The extra-dimensionality predicted by string theory leads Dr. Rhoades to believe heaven is closer than we think. “Everything in the Bible points to heaven being close,” he notes. “The New Testament tells us that Stephen looks into heaven from the physical realm.

In his book, Rhoades joins scientific theories with Scripture to make his case. “String theory says that more spatial dimensions do indeed exist,” says Rhoades. “I believe heaven is in the next dimension, right next to where we reside in our three-dimensional world.”

The dimension where heaven is located may only be an eyelash away from us!

“For example, in Genesis 18, three angels visit Abraham. They eat, talk, and spend time with Abraham. Then two of the angels go to Sodom to speak with Lot. This is one of the clearest examples of angels moving across dimensions. The Bible assumes the reality of the spiritual dimension while science points to a higher dimension or dimensions.”

Some have compared the extra-dimensionality of heaven to what is portrayed in The Matrix, a 1999 science fiction film. Rhoades doesn’t think comparisons to the sci-fi film are correct, but says Christians should not be afraid of real science nor shy away from it. “The more we learn about the universe and what it is made of, the more we learn about the Grand Designer who created everything,” says Rhoades.

“Science can be a great way to reinforce one’s faith. We live in a mathematical universe, and we serve a God of order and laws. Whether it is space, the earth, or the human body, everything points to a Creator and not to billions of years of random chance. Though creation has been severely impacted in a negative way by sin, the fingerprints of the Creator can still be found the deeper and further we look.”

The book has provided Rhoades with more opportunities to talk with people about heaven. “It’s a very big comfort for people to know that heaven is close. It’s vibrant and real. And when I talk to older people, it brings comfort to them to know that what happens is real. It’s a real place and they can expect to go there through faith in Jesus Christ.”

Dr. Jeff Rhoades received a Ph.D. in Biblical Studies from Louisiana Baptist University. He and his wife Paula were missionaries in El Salvador for nearly a decade, returning to the U.S. in 2013. Dr. Rhoades currently serves as a pastor in Topeka, Kansas. For more information visit https://wellingbooks.com