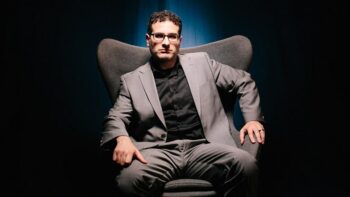 Trevor Rubenstein got mad when some Christians approached him at a mall and talked about Jesus.

“I’m Jewish!” he barked. “This Jesus who you’re following is a false prophet! Why are you sharing this with me?”

Later, he admitted that his anger was unjustified. But it seemed reasonable at the time: Judaism was important to his well-off family.

Trevor – his Hebrew name is Tuvia – grew up in an affluent family. His parents did well; his grandparents did very well, he says on a video posted Chosen People Ministries, formerly One for Israel.

Despite living in the lap of luxury, Trevor experienced significant depression to the point of being suicidal.

“I would often contemplate killing myself,” he said. “There was this overlying feeling that I’m not loved like I want to be loved.”

The inner emptiness prompted him to look for acceptance, which he found among the druggies. He began to drink and abuse drugs.

“That really affected my grades and my education,” he says.

With plummeting grades and behavioral issues, he got kicked out of school.

At college, a friend invited Trevor to a Bible study. Without really listening to what the activity was, Trevor acceded. Only too late did he realize he was in a Bible study.

But the friend had answers to Trevor’s doubts, and he stayed. The lesson that day was the prodigal son from Luke 15, in which the younger son cajoled his father for an early release of the inheritance, which he squandered in wild living until he was penniless and working like a slave.

Conditions were so bad for the prodigal son that he ate what the pigs ate, which is anathema for Jews. After suffering for some time, the young man came to his senses. He decided he would return home and beg for forgiveness. He would not dare to ask for restoration to full sonship; he would accept being a slave in his father’s house. A slave had it better than he did at that moment.

“His dad saw him (from afar) and missed him,” Trevor narrates. “He loved him and embraced him and said to him: ‘You’re not my servant, you’re my son.”

“I felt this peace over me,” he recounted. “It was a feeling of acceptance and overwhelming love.”

Trevor experienced a veritable epiphany: “Oh my gosh. There is a God who loves me. What I”ve been doing for years has been separating me from him. And the way to know him is through the words of this man Yeshua.”

Marveling, Trevor continued reading the Bible. As he read, he continued to feel God’s love. He also felt something inexplicable.

“It was removing my depression,” he remembers. “How could a book do that? How could just reading words do that to me?”

Trevor was getting to know the Jewish Messiah.

“Through this person Yeshua, I can be reconciled to God. Everything I did to separate myself from him, all this life I was living that was isolating me from him, that despite those things, He loved me.”

Later, he became quite wealthy, selling instruments for measurements to the federal government.

“I had whatever I wanted, but I realized that happiness doesn’t come from money and success. I needed something deeper,” Trevor says.

“I owe my life to Jesus because I know full-heartedly that I would have killed myself if it wasn’t for what he did in me. How powerful that he gave his life so that I could have life and understand love.”

David Calderon studies at the Lighthouse Christian Academy near Westwood in Los Angeles.