Rabbi Jason Sobel grew up a traditional Jewish home in the self-described “Holy Land” of New Jersey, which he says counts more Jews than Jerusalem. He attended Hebrew School and was fêted by family and friends at his Bar Mitzvah.

“I became a hip hop DJ and was working in the music industry for a large recording studio in New York City,” says Rabbi Sobel, author of the new book, Mysteries of the Messiah (Thomas Nelson). He is also the founder of Fusion Global.

He observed famous people and thought to himself, There has to be more to life than just this. They have fame, they have fortune — everything I want — but I can tell there’s something missing.

At 18, he began his spiritual journey of discovery by studying with his rabbi, then he explored Eastern philosophy and other religions.

One day he was meditating and something very unusual happened.

“My soul began to vibrate, and it left my body and I wound up having this encounter with this king on a throne in heaven,” Rabbi Sobel told God Reports. “I felt the power of God pulsate through my body. I knew this king on the throne was Jesus, but I knew nothing about Jesus!”

Sobel had been acquainted with Christians growing up, but no one had ever shared the gospel with him. “I thought Jesus was a nice Jewish boy that converted to Roman Catholicism because I didn’t know any Jewish kids named Jesus, with a mother named Mary.

“I had this encounter, and I was overwhelmed by it. I knew Jesus is real.”

During the encounter he could feel his soul come out of his body. “I could see my body sitting there. And the next thing I know, I was through the clouds and in heaven, and saw Jesus on His throne.”

In the presence of Jesus, he felt love, peace, and a euphoria unlike anything he had felt before. “When I came back in my body, I was still shaking under the power of the experience. I knew Jesus was real, but I had no context for him. I thought he was some sort of avatar, some sort of God man.”

Sobel was surprised when his best friend became a Christian. One day his friend turned to him and said, “Jason, you went to Hebrew School. Can you tell the difference between the Old and the New Testament?”

His friend read a passage about the crucifixion.

Then his friend read the following passage:

He was wounded for our transgressions,

He was bruised for our iniquities.

The chastisement for our peace was upon Him,

And by His stripes we are healed.

“Old or New?” his friend asked.

“No, that’s Isaiah 53, the Jewish prophet prophesying about the Messiah 700 years before He ever walked the face of the earth.”

Sobel was shocked by that revelation, and also felt “provoked to jealousy” by the idea that his friend knew more about the Jewish Messiah than he did.  In response, Sobel accepted an invitation to visit his friend’s messianic congregation.

The power of the Word and the Spirit touched Sobel’s heart. He responded to Rabbi Jonathan Kahn’s invitation at the end of the service to receive Jesus as his Messiah, Savior and Lord. “He said, ‘If you prayed this prayer for the first time, raise your hand.’ (I raised my hand.)

“‘If you raised your hand, you’ve just been born again.’”

“I didn’t know what it means to be born again,” Sobel recalled. “I gave my mother enough trouble when I was born once. Jews don’t get born again,” he thought.

Rabbi Kahn gave him the first New Testament he’d ever seen. “I took it home, read it, and was blown away at how Jewish it was, the Messianic prophecies that were in it. I became convinced that he was the one Moses and the prophets spoke of, so I gave my life to Him, and was instantaneously transformed.”

When Sobel told his mother what happened, she was stunned and alarmed. “What have you done? I can’t believe you believe in Jesus. You joined a cult! Go meet with the rabbi,” she urged.

Sobel’s subsequent study of the Hebrew scriptures underlining all the Messianic prophecies, became the genesis of his new book, Mysteries of the Messiah. 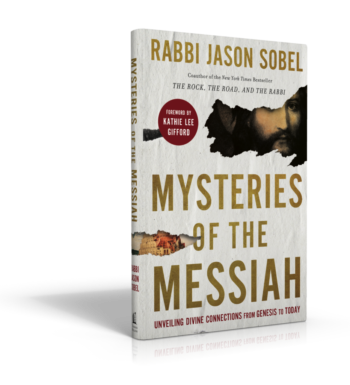 Sobel says the book is written for Christians who want to learn more about the Jewish roots of their faith as well as Jewish people exploring the opening chapters – where they will find a job description of the Messiah.

Rabbi Sobel described the time he bought his first high-definition TV, did not see a big difference compared with his old TV, but later realized he had been watching standard definition channels. “I feel like many people are reading the Bible in standard definition. If you don’t know the details of how the old and the new connect, you’re not going to fully see it.”

“Why did Jesus have to die on the cross? Is it just a Roman means of execution? No. How did sin enter the world? Man stole from the tree. So, God put back on the tree the second Adam, to make an atonement and repair for you and me.

“Why are his hands pierced? Because our hands stole from the tree. Why is His side pierced? Because Eve, the one who led into temptation was taken from the side (of Adam). He’s making atonement for Adam and Eve.”

These and other illuminating insights are contained in Sobel’s masterful book. “There’s just layers and layers, that when you connect this, you see the depth and the beauty of the redemption and also how the story comes together with greater detail.”

To learn more about Rabbi Jason Sobel and his ministry, go here

To listen to Rabbi Jason Sobel in Episode 10 of our Best of God Reports Interview Podcast with journalist Mark Ellis, go here: https://podcasts.apple.com/us/podcast/best-of-god-reports-interviews/id1560279290?i=1000558204717