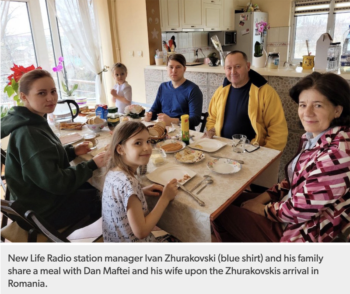 Despite a variety of challenges resulting from the ongoing war, a Christian radio station broadcasting to Slavic nations has continued its Gospel ministry, this time from Romania.

Although New Life Radio is the first and only FM Christian radio station in Russia, the station relocated from Russia to Odessa, Ukraine, several years ago because of increasingly restrictive media laws.

Now the violence and uncertainty of the war has forced the station to relocate from Odessa two times in the last several weeks. Although the station representatives had plans in place in case of a Russian invasion, they never envisioned what has unfolded over the last few weeks.

During February, station manager Ivan Zhurakovski was making preparations for a potential move of the station, including purchasing a vehicle to assist with the relocation efforts. Although the station had never purchased a vehicle before, it was able to purchase an SUV the evening of Wednesday, Feb. 23. The invasion began the next morning.

Daniel Johnson is the founder and organizer of New Life Radio. Despite relocating to the United States several years ago, Johnson continues to assist New Life Radio remotely, as well as its sponsor organization, Christian Radio for Russia.

He said Zhurakovski called him the morning of Feb. 24 with the solemn announcement “it’s war.”

Johnson explained the city of Odessa went into a panic as Russian forces attacked Ukraine across multiple fronts. Many in the city entered bomb shelters, and Johnson said station workers could see rockets flying outside past their own windows.

Zhurakovski and other station workers were forced to make a decision to stay or go.

Several decided to stay in Ukraine to assist their local churches during the crisis, while one worker – a young single man named Yuri – decided to stay behind in Odessa to operate the station.

The station’s equipment allowed for it to continue broadcasting via the internet and on satellite radio despite the conflict going on around it. In fact, there was no point during the crisis in which New Life was off the air, as Yuri was able to automate the equipment to play programming while live broadcasting was not an option.

Despite this, station leadership still wanted to seek out a safe location where they could return to live broadcasting.

Zhurakovski decided to flee with his family in hopes of reaching Chisinau, Moldova, to again set up for live broadcasting. A few days after the war started, violence ceased for a brief time for discussions between the nations.

It was during this brief pause in fighting that Zhurakovski fled with the family, along with the much of station’s radio equipment, in the newly purchased SUV.

After a long and complicated time of waiting in line at the border, the family finally was able to cross into Moldova, but that was not the end of their journey.

Immediately upon entering the country, one of the pastors of the local church informed the family it would be too dangerous for them to stay, as Russian forces were operating very close to the border and there was fear that an invasion could be imminent.

“We had absolutely no other contacts in Moldova or Romania,” Johnson told Baptist Press, “and so when they called me to tell me the update it was like ‘where do we go or what do we do?’”

Returning to Ukraine was not an option, so Johnson said he “scrambled” around on the internet trying to find a safe place for Zhurakovski and his family to take refuge.

“As soon as I got off the phone with Ivan I just prayed, ‘OK Lord, what’s next? Please help me figure something out.’ And I just knew that God would provide,” Johnson said.

Johnson determined Romania would be the next best option and began searching for evangelical churches in the country within a drivable distance. After much searching, he found two local evangelical leaders near Lasi (pronounced Yash) who reached out to him.

The two men were a pastor of a local evangelical church named Paul Schneider, and another man named Dan Maftei, who operates a Romanian Christian media ministry based in Lasi.

Despite the similar missions of the two organizations, Johnson said New Life had had no previous contact with this Romanian Christian news station. Maftei just happened to be one of the people to contact him.

When Zhurakovski and his family crossed the border into Romania, the two men helped them find safe housing with plenty of space where they could both stay and set up the radio broadcast.

“Everything they needed, they got,” Johnson said. “It was like God just stepped in and provided the right people and gave them exactly what they needed.”

In the coming days, Zhurakovski would set up the station’s equipment and began live broadcasting for several hours during the day, and then switching the signal back to the automatic programming still being run out of Odessa.

Johnson said even if Russia were to cut out internet or communications (Russia has already blocked Facebook, Instagram and other social media), New Life would still be able to broadcast via satellite signal.

The station has experienced a noticeable increase in Russian listeners since the war started, he said, and he believes this signals the spiritual desperation of people involved in the war.

“This is a really critical time and people are really searching for answers,” Johnson said. “As people face war, destruction and death at any moment they are much more open to hearing from the Lord.

“We are not completely sure of the reason that people end up finding us, but we just know we are getting new listeners. However they find us, our challenge is to give them what they need know, which is the Gospel and the assurance that the Scriptures give us.”

Johnson said the station has increased its Bible teaching programming, prioritizing that over music in order to clearly articulate the Gospel message to listeners.

“We’re going to trust God that he will allow us to have the technological means to put the Scripture on air and teach people,” Johnson said. “The need for proclaiming the Gospel will never end, and we’re going to keep finding a way to do it. Nothing is going to stop us until God takes it away from us.”

Daily updates on the station can be found here.