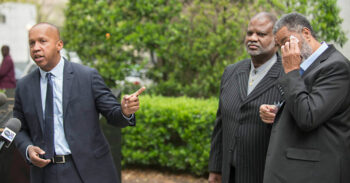 An African American man wrongly convicted of murder won to Christ a KKK member who lynched a black teenager.

“I truly believe God sent me to Death Row to meet Henry Francis Hays and to show him what real love felt like,” says Anthony Ray Hinton on a 700 Club video. “Real love had no color.”

It wasn’t always easy for Ray to forgive. The cop who arrested him told him he had no chance to escape the murder and attempted murder charges connected to a string of armed robberies in Alabama in 1985.

Never mind that the evidence was skimpy and Ray had an unshakeable alibi for at least one of the assaults. The prosecution’s case rested on forensic evidence which affirmed the bullets matched the gun found at Ray’s house. One officer told him:

“What do you do when you tell a lawyer that you’re innocent, and he looks at you and says, ‘The problem with that statement is that all of y’all are always doing something and the moment you get caught you say you didn’t do it.’” Ray recounts.

True to the cop’s cold assessment, an all-white jury found Ray guilty of two counts of capital murder and sentenced him to death by the electric chair.

“The natural reaction was that it’s over. I was going to be executed.”

Ray’s cell was a mere 30 feet from the yellow-painted execution chair they called “Yellow Mama.”

Every legal appeal Ray made was blocked or dismissed.

“For the first three years, I was in a stage of hate. I hated those men who did this to me.”

As time passed, however, he realized the hatred in his heart was unsavory and wasn’t pleasing to God.

“I asked God to remove this hatred,” he says. “In order for me to be free, I had no choice but to pray for those men that did this to me.”

Ray decided that he would serve the Lord, despite the horrible injustice.

“If this is what God intended for me, to be and die, this is where I die,” Ray resolved. “But while I’m here, everything around me is going to live. I’m going to bring the best out of everybody that comes in touch with me.”

But before he sat in the electric chair, Hays accepted Jesus under Ray’s patient and loving witness.

In their last conversations before Hays’ execution in 1997, Ray told him: “Henry, I truly believe that you’re going to Heaven.”

“You know Ray, I’ve been reading the bible and I have changed my views on so many things,” Henry replied. “I’ve finally looked at you as a human being.”

After years of rejected appeals, Ray got the Equal Justice Initiative (EJI) to take up his case in 1998.

EJI probed the case against Ray and found it was deeply flawed: Witnesses had been manipulated. Ray’s defense counsel had been inept. The surviving victim’s initial description of the assailant bore little resemblance to Ray.

The linchpin in the case against Ray was the forensic report, that the bullets came from the gun retrieved at Ray’s house. EJI hired three of the top experts in forensic analysis to reevaluate the state’s report.

Shockingly, they concluded the gun was not a match!

In 2014, the US Supreme Court finally granted Ray a new trial.

“I’ve always felt that I have the Supreme Lawyer,” Ray says. “I don’t believe the God that I serve was going to let me die for a crime I didn’t commit.”

In April, 2015, the State of Alabama dismissed all charges against Ray when state ballistics experts were unable to match the bullets to the handgun.

After serving 30 years in prison for a crime he didn’t commit, Ray was released.

Today, Ray is a community educator with EJI fighting for justice reform. He’s also written a book about his journey of forgiveness and redemption, The Sun Does Shine.

“Jesus didn’t say, ‘Hey, when an enemy come across you, I want you to hate him,’ Ray ins. “He said, ‘Love your enemy.’ The only way we will ever conquer hate is love.”