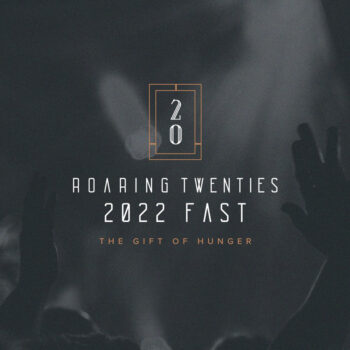 “Among all the gifts of God, outside of salvation, none is greater than the gift of hunger.” — Corey Russell, Upper Room Church, Dallas, Texas

The hunger for God is an “escort into the deeper things of God,” Malachai O’Brien, who is Co-Visionary of the Roaring Twenties Fast, told Think Eternity recently.

Last month, O’Brien introduced Christian leaders and influencers, who met in advance of inviting 1 million young people to fast and pray in January 2022, to the movement’s new theme, “The Gift of Hunger,” during a video conference call.

The call included times of worship from Mack Brock, Andrew Meek of IHOPKC, and an exhortation from popular Christian artist Danny Gokey. Evangelist Matt Brown (Roaring Twenties Fast Co-Visionary) led the call. Evangelist Jon Groves also participated. Ronnie Floyd, one of the foremost Christian leaders in America, shared about the power of fasting and prayer in his own life and ministry.

The Roaring Twenties Fast began in January 2020 and took place again in 2021.

“The purpose of the Roaring Twenties Fast and community is to make one person famous. He is Jesus Christ,” O’Brien said during the call. “[Also,] to realign our hearts with the reality that Jesus is the only one who can satisfy.

“We do this every year to remind all of us. I know we all know this in our hearts, but sometimes idols get in the way. The goal of this fast is that all of us be transformed to be greater lovers of Jesus. We become what we behold. I want to behold Jesus.

“I want more of God. The fastest way to encounter more of God at a deeper level is fasting.”

Brown said leaders have been amazed at how God has moved in their midst as they have been faithful to share the call to 1 million young people to fast and pray.

“God’s blessing is all over it every time we do it,” he said. “We can tell that God longs for His children to fast and pray, press in and break through.”

“If I had one gift or desire to bestow on you more than all others, I would bestow upon you the hunger for God.” — John G. Lake (1870-1935), Apostolic Faith Mission of South Africa

When asked about what he would say to encourage the next generation, O’Brien told Think Eternity:

He added, “The greatest tragedy for the next generation is to never have been told or shown that there is a way to the deeper things of God.”

Personal satisfaction does not come from “synthetic glory,” O’Brien said. “May God rescue a generation from being satisfied with the synthetic and give them an insatiable longing for the presence of God that transcends anything else they could ever achieve personally.”

This generation needs to “move from just achieving to simply abiding” in God, he said. ”How do you know when you ‘have it?’ I can’t answer that for you. But I can say that you will know when you don’t.”

The article above was first published at Think Eternity.

Alex Murashko is the founder and editor of Media on Mission, which highlights the work of media and journalists, working in all platforms, whose Editor in Chief is above all others. Murashko is a contributing writer for thinke.