Doug Cobb, author of And Then the End Will Come, has assembled compelling evidence from Scripture and the trajectory of current world events that the Second Coming of Jesus Christ is more imminent than many Christians may realize.

As such, his book is must reading for any believer seeking to navigate the often-depressing news cycle and retain an eternal perspective, and it’s an important addition to the books written about the return of Christ.

“We know there will be a generation that will witness these things,” Cobb told God Reports. “There are reasons to hope and reasons to think we could be that generation.”

He also acknowledges that some students of prophecy start the generational clock running in 1967, when Israel regained control over Jerusalem.

Cobb is managing partner of the Finishing Fund, whose mission is to make disciples in every nation and people group by the end of 2022. Of roughly 12,000 people groups on Earth, his reckoning is there are only a few hundred groups left with no known believers. “By God’s grace, it is possible that all the remaining groups will hear by the end of 2022,” he says.

When the Great Commission is completed, Jesus pointed to a tectonic shift in world events when he said, “And this gospel of the kingdom will be preached in all the world as a witness to all the nations, and then the end will come.”

Another clue to the return of Christ is contained in Daniel 12:11-12: “And from the time that the daily sacrifice is taken away, and the abomination of desolation is set up, there shall be 1,290 days. Blessed is he who waits for and reaches the end of the 1,335.” 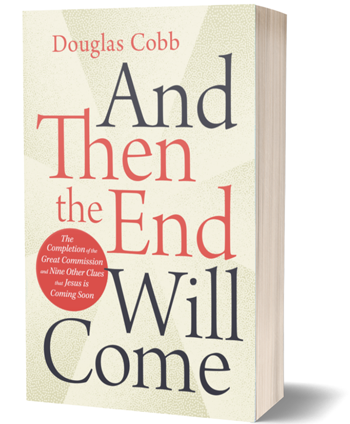 The interpretation of these two verses had always been a mystery to Cobb until he started researching the book and came across an explanation that seems to point with “great precision to the second coming of the Messiah.”

The theory posits that the time the daily sacrifice is abolished refers to the Babylonian conquest of Jerusalem, with the end of the Temple sacrifice between 605 BC and 587 BC.

“We saw in Daniel 9 “sevens” or “weeks” described periods of seven years. Is it possible that “days” has the same meaning in this passage, so that 1,290 days represents a period of 1,290 years?” he asks.

Historically, the Dome of the Rock was built on the Temple Mount approximately 1,290 years after the Babylonians halted the sacrifice. Construction of the Islamic shrine began in 684 AD and it was completed in 692-694 AD.

When 1,335 years is added to the time construction began on the Dome of the Rock, one arrives at about 2030 AD.

Cobb understands there have been several fulfillments of “the abomination that causes desolation” in history, including Antiochus Epiphanes IV erecting an idol of Zeus in the Holy of Holies and sacrificing a pig on the altar, Titus destroying Jerusalem and erecting a golden eagle over the Temple gates, and a final fulfillment in the future when the antichrist will erect an image in honor of the beast in a rebuilt Temple and force the world to worship it.

So, the timeline based on Daniel 12 views the Dome as one of several instances of an abomination that causes desolation.

Another clue to the time of Christ’s return is based on the widely held belief that biblical history will have a 6,000 year span, followed by a thousand-year millennium, “echoing the six days of creation and the seventh day of rest.”

“By all accounts, we’re now at the end of that six-thousand-year period,” he notes.

Another fascinating clue comes from Hosea 6:2, which says: “After two days he will revive us; on the third day he will restore us, that we may live in his presence.”

If, as Scripture suggests, a day to the Lord is like a thousand years, Cobb asks if “God is promising to revive his people two thousand years after the departure of the Messiah or the destruction of the Temple?”

“When did Jesus ‘go away?’ If it was when he ascended, two thousand years later would be somewhere between 2028 and 2033.”

There are more fascinating clues related to the imminent return of Jesus in Cobb’s book, which make it essential reading for serious-minded believers.

While Cobb is not a date-setter, he provides a span related to the 10 clues that range from 2022 to 2068, with the most likely time for the return falling within the next decade or so.

One other intriguing footnote: Cobb has the Feast of Trumpets circled on his calendar for the next decade. “The verse that people quote to say we can’t know when he returns, says we can’t know only the day or hour. Intriguingly, Trumpets is a two-day festival, so it can happen on Trumpets without being able to know the day or hour. I don’t want to be too doctrinaire. I think you can hold both those things in your mind — it could be during that festival.

“Jesus said He will come at a time we don’t expect. I will be shocked if he doesn’t fulfill Trumpets and Atonement on his return in some way.”

The motivation for the Finishing Fund is 2 Peter 3:11-12, which describes believers’ anticipation for Jesus’ return and active involvement in completing the Great Commission. “We look forward to the day of God and hasten His coming. It is an exciting thing to focus on and work toward, hoping that we could be part of the generation that gets to witness these things.”

Surveying recent events, Cobb agrees there is plenty to be discouraged about. “The next few years could be really tough for Christians in America,” he says. “We look past that to the great things that are to come.”

Many Christians are unaware of the enormous revival taking place in the Muslim world. “Our best understanding of Islam is what we’re seeing in Afghanistan. What they don’t know is that there are thousands of former Al Queda and Taliban guys leading church networks in Iran, Afghanistan, Iraq, how the church is hollowing out Islam in these places. It is amazing to see what God is doing.

“We are seeing remarkable progress and I continue to believe by God’s grace we will be started everywhere (in every people group) by the end of next year.”

To learn more about the book and the additional clues, go here