Of the many heroic stories from 9/11, none is more improbable than the way God used a crack addict who disliked cops to rescue a member of the Port Authority Police trapped in a void of collapsed rubble 30-50 feet below the mangled pile of smoking wreckage that once was the Twin Towers.

“My life was drugs, alcohol, crack cocaine and many many rehabs – everything that comes along with being a crack addict,” Chuck Sereika told God Reports. “I lived that life. It was the crack whores, the crack cocaine, the street lifestyle, the lying, stealing, and cheating. That was me.”

In the weeks and months leading up to 9/11 he had been to rehab facilities in Tucson and Santa Fe, New Mexico. A former paramedic, he made his way back to Manhattan in July, 2001, where he worked in real estate for a family member, attended AA meetings and Catholic mass, although he was raised Greek Orthodox.

His aunt let him stay in a vacant apartment on West 57th Street, which he never left for the five days leading up to September 11th. “I was depressed, eating, sleeping, from Thursday to Tuesday. I didn’t leave the apartment and I didn’t shower.”

On the morning of the 11th, Sereika woke up in a daze and noticed there was more noise on the street than usual, with a lot of people on the sidewalk outside a bar across the street, and many emergency vehicles going by.

He flipped on the TV on and saw the Towers burning. Then he pulled up a phone message from his estranged sister. Her message said, “I hope you’re okay. I’m sure you’re down there helping.”

Why would she think I’d be down there helping, he thought. That’s silly. I haven’t been a paramedic for years.

Strangely, perhaps, he didn’t want to let her down, so he decided he would go to Ground Zero and volunteer to do something. “It wasn’t about putting myself in danger. I just wanted to be able to say I was down there helping,” he recounts. He thought he might go to the triage area and hand out water or apply bandages to the wounded.

He showered, shaved, and found a paramedic sweatshirt in the closet he had given his cousin. He put that on with a pair of blue pants.

Sereika walked past the Catholic church he had been attending and said a quick prayer, then made his way to St Luke’s Hospital. From there, he got a ride to New York University Hospital, riding in an ambulance.

At his recent rehab in Santa Fe, he had drawn a picture of himself in an ambulance “and the New York City skyline going down. It was like a premonition or prophetic vision. I realized in the ambulance… I remembered the picture in that moment.”

From NYU, he rode in an EMT ambulance that deposited him a few blocks north of Ground Zero.

When he got out of the ambulance, it was like stepping into a snowstorm. “Everything was covered in dust. It looked like a blizzard had hit.”

At this point, it was noon on September 11th. “Building seven was burning, a 50-story building and they were expecting it to collapse. Nobody was searching. It was too dangerous to search. They were waiting for that building to collapse,” he recounts.

At 7 pm the building finally collapsed, falling straight down as the Twin Towers had fallen.

After that, Sereika decided to start searching the rubble, even before any organized effort was initiated by the authorities. “There was no FDNY, no police, it wasn’t safe for them to search. There was only a handful of people searching.”

“I was not really that present. I had been sleeping since Thursday. I just got out of rehab.

“It felt like stepping on a grave. I realized at that point that there were dead people underneath. I am scared of smoke, scared of fire, terrified of heights, pretty much scared of everything, but there I am crawling on this rubble.”

Fire and smoke were coming up through voids in the tangled hellish landscape. 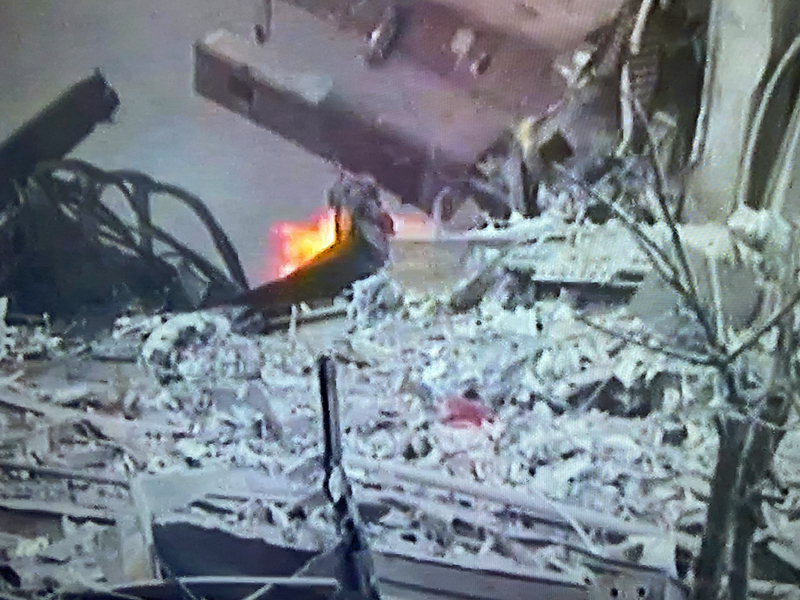 “Can anybody hear me?” he yelled through holes in the pile.

At a certain point he saw Sergeant Jason Thomas, an ex-Marine, standing next to a hole in the wreckage. Like Sereika, Thomas had grabbed his old uniform and set out to help.

Minutes earlier Sergeant Thomas had yelled down into that hole, “This is the United States Marines. Is anybody down there?” Then he heard a faint reply and wondered if he was hallucinating or dreaming. Peering in, he saw the hand of someone buried deep below the earth. He recognized it would not be easy to reach that person.

Sereika clambered up to the hole and introduced himself to Thomas as a paramedic. The former Marine was relieved to think someone with emergency training had arrived.

“I saw this dirty hand, maybe 50 feet down,” Sereika recalls. “My paramedic training kicked in and I thought maybe his life is worth more than my life. My life wasn’t going very well. I started crawling down in this fiery, smoky, 50-foot hole into the rubble.

The hole was so hot and smoky it was difficult to breathe.

Sereika slowly maneuvered himself down on all fours. “I pulled out my cell phone to see if I had reception and it slipped out of my hand, went down the hole, and I never saw it again. At that moment I thought I was going to die there. I couldn’t even call my sister to tell her I was helping.”

After passing an elevator shaft and a dead body, he finally reached the side of Port Authority Police Officer Will Jimeno, pinned by large chunks of concrete rubble and steel rebar.

By that point, Jimeno was ready to give up.

A fellow officer named Dominic had been buried next to him in the debris. Dominic managed to free himself and crawled into a small space next to Jimeno and tried to begin removing the concrete cocoon crushing the man. He worked for 10-20 minutes when they heard a tremendous boom and debris started falling.

Something fell and hit Dominic in the head and he began bleeding from his mouth. Dominic recognized it was a fatal blow.  He said, “Don’t forget I died trying to save you guys.”

Then he took out his side arm and fired one bullet toward the hole at the surface, hoping to alert someone they were down there, then he passed.

When Sereika reached the side of Jimeno, the trapped officer began to hyperventilate to the point he thought he was going to have a heart attack. Sereika urged him to remain calm and began to dig him out.

Sergeant Thomas came down and the two of them worked. They had to go topside multiple times to get air. Every time they went up, they would yell for help and wave their hands. “No one was around. We were in the middle of the debris and no one could hear us.”

At one point the cavern filled with smoke and Sereika got scared. “Fire was coming through in various places. It was obvious we were in grave danger. Every cell of my body said to get out of there.”

Jimeno got scared and said, “Cut my leg off.”

“I’m not a trauma surgeon,” Sereika replied. “It’s not an option. We’re not leaving you. If you die, we’re all going to die.”

Jimeno shared that his wife was six-months pregnant. They were expecting a baby girl.

Sereika had been using a pair of cheap, thin brown gloves he got at the hardware store to remove the debris, which quickly ripped to shreds.

Finally, other help arrived, two NYPD ESU officers, Scott Strauss and Paddy McGee, who rappelled into the hole with ropes.

Strauss asked for a self-contained breathing apparatus and began to supply oxygen to Jimeno. Sereika started an IV, something he hadn’t done for years.

After four hours in the hole, there were still a couple pieces they couldn’t remove from Jimeno. Then the rescuers lowered a Sawzall and the Jaws of Life, which ultimately freed the officer.

They carried Jimeno up in a basket and Sereika followed.

At the top of the hole there was a deputy fire chief in a white hat.

Jimeno blinked, looked around, and realized for the first time the Twin Towers were missing. “Where is everything?” he asked.

“We hadn’t even thought to tell him the towers were gone,” Sereika explains. “We came out of the hole and it was night time and there was nothing there.”

Ladders, end-to-end had been placed across the rubble, and there were uniformed people, firemen, shoulder to shoulder all the way to the end, carrying Jimeno out, handing him off to each other.

After the dramatic rescue, Sereika walked 20 blocks to his cousin’s apartment. “She took me in and that was it for me.”

Sereika had always believed in Jesus because of his grandmother, but says he was not born again in 2001. After 9/11, he began watching TBN, then attended a Calvary Chapel. A few years later he started following the teaching of John MacArthur.

After 40 years of addiction, his body began to break down. He had abdominal surgeries, developed pernicious anemia, suffered a stroke, and had a form of dementia induced by the anemia.

“It was a long road back. On the road back I focused on the Bible,” he says.

Still living in Manhattan, one night he woke up and the TV was blasting the gospel. He sensed there was demonic activity around him. “I said the Lord’s Prayer out of a deep sleep, and I specifically remember something came out of my body. It was like a demon going out and the Holy Spirit coming in. That may have been the point when the Holy Spirit entered me.

“My whole life changed, my thinking changed. Every word out of my mouth was an F-bomb. I stopped internet pornography. He sanctified me over time. I don’t even think about crack cocaine anymore. It is the fruit of the Spirit.”

There were only 18 people rescued from the rubble on 9/11, including Will Jimeno. He made it to the birth of his daughter. 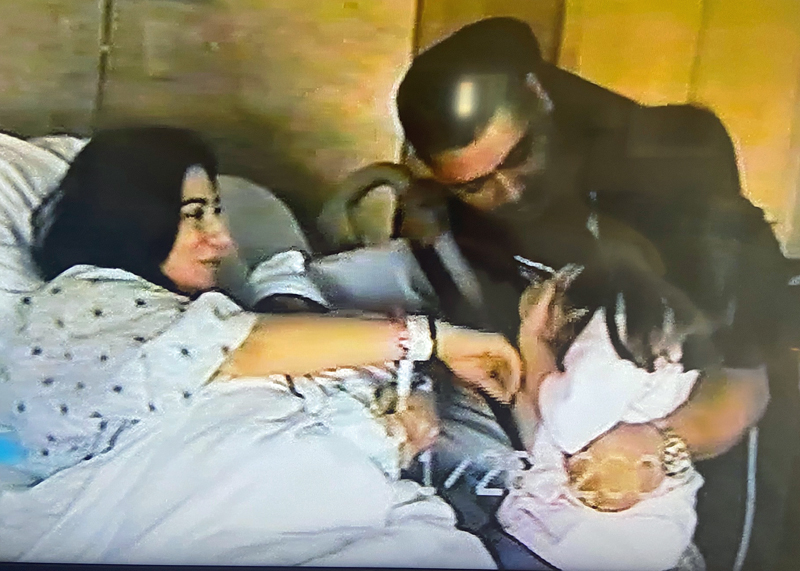 “I was the most improbable person to be there,” Sereika says. “God’s plan was to use me that day — God uses the weak and foolish things to confound the wise.

“It was the Lord who put the right things on my heart at the right time. I had no desire, no will, no strength, no training, no power to have accomplished what the Lord used me to do that day.”

Chuck Sereika is currently enrolled as a student at the Word of Life Bible institute in Hudson Florida. He developed the Bible Time app and widget, which provides a different Bible verse every minute of the day. It currently has 20,000 users.