Bobby Bowden left an impact on hundreds of young men during a coaching career that spanned more than six decades. The testimony he left behind is evidence of the influence he had on and off the field.

Bowden passed away Sunday (Aug. 8) at age 91 after a short battle with pancreatic cancer. Until the end, he remained active in using his platform to spread the Gospel.

During a speaking engagement at Eastside Community Church three years ago, I had the opportunity to spend 15 minutes with the legendary coach, and it was an interview I will never forget. We talked football, but the conversation was mostly about his faith.

“I don’t know of any football player that played for me who didn’t know about Jesus,” he said at the time. “Talk about getting their attention, every Friday night before a football game, they were going to listen to you. I would read Scripture to them. I get letters from (former) players and not one of them mention football. Not one of them. They say, coach, ‘Thank You.’” 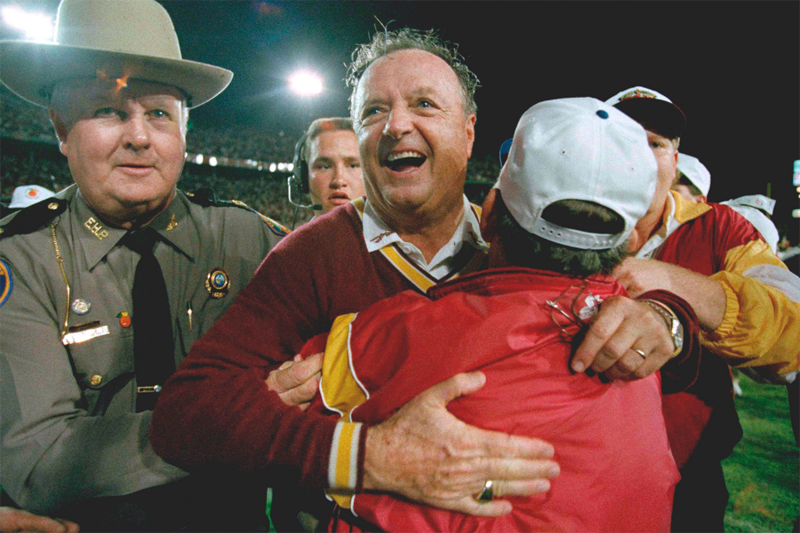 When Bowden retired 12 years ago after 34 years as head coach at Florida State, his audience changed. He traveled the country sharing his testimony with people from all walks of life. He limited his engagements to one per week and was a witness to “the world, talking to people no matter if it’s a football player or a lawyer” and “it’s the same story no matter what.”

To Bowden, spreading the Gospel was the same no matter the audience, and he wasn’t shy about sharing the message regardless of the negative feedback he received at times.

“The thing that people wouldn’t understand, it’s not politically correct to do what I do,” he said. “To go into a state institution like Florida State University and talk about your religion and it’s frowned upon. They (probably) would have liked to fire me if they wanted to, but they never did.

“I was always determined that if they made me stop doing it, I was going to go down in the basement and do it, but I’m going to do it. I felt like God wanted me to (witness). I do understand it’s not politically correct, which I don’t care anything about, by the way.”

Bowden knew coaching was in his future long before he became a player or a coach.

“I really feel like God wanted me to coach. I feel like I was called to coach,” he said. “The first five years of my life, I lived behind the football field at Woodlawn High School in Birmingham, Ala. All I heard was football, football and football. … That’s all I knew.”

Once he figured out his path of life following his playing career, God charted the course he followed for the duration of his coaching career.

“I had six jobs; I didn’t apply for one of them,” he said. “You say that’s a coincidence, but six times?”

He used his platform not only to coach, but to witness.

“Football is what God gave me to witness,” he said. “I thank Him for that. … I would tell other coaches: Don’t make football your life. God is No. 1. Your family is No. 2, education is next and other people are next.”

During his speaking engagements, Bowden’s testimony was simple, yet effective.

“A lot of times when I speak, one of the first things I will say is that I’m a Christian, but I’m no better than anybody else, and I’ve done wrong, but I’ve been forgiven,” he said. “So many people are going to think they’re going to heaven because they’ve been good. That ain’t going to get them there. You’ve got to believe in Jesus. If you could go to heaven by earning it, we wouldn’t have known that we would need a Jesus or you can go without Him. No, you can’t. You’ve got to go with Christ, and that’s the story that a lot don’t know and what God wants told.”

After being healed from rheumatic fever as a young child, Bowden vowed to serve God “any way I can,” and his coaching career exemplified his faith. During his career, Bowden compiled a 377-129-4 record and won two national championships at Florida State. He said he was “thrilled” after the Seminoles captured the national title in 1993 but didn’t get all caught up in the excitement of winning it all.

“Once you get to the top, like my daddy always said, there ain’t nothing up there,” he said. “There is only one thing in this world that is everlasting, and that’s Jesus Christ. That’s the only thing that will work. When you accept Jesus Christ as your Savior, you will live forever.”

The life and testimony he lived assured Bowden of that eternal promise he was given Sunday morning.