attending a prayer gathering he was holding in Portland, on Saturday, the Northwest city once again saw a meeting between darkness and light.

But this time, worshippers of Jesus “didn’t back down” as Let Us Worship movement leader, Sean Feucht proclaimed.

Some 5,000 people or more showed up to worship the Lord in the very place where Antifa members had terrorized the Canadian pastor’s group the night before, throwing some of their sound equipment in the nearby Willamette River, and spraying them with mace.

Sean Feucht posted on social media: “Members of Antifa showed up in Portland last night to threaten, harass, bully and intimidate us. A mom and her baby were tear gassed. Antifa stood 10 feet from me as we lifted our voices in praise, but we didn’t back down. We kept worshipping and God moved powerfully!” 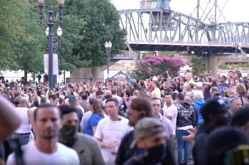 “One member of Antifa who came to disrupt our service was SAVED giving his life to Jesus! It’s a time for a BOLD & BELIEVING Church! God has not given us a Spirit of fear but of POWER & GRACE! The Church is on the move and the gates of Hell will not prevail against it!” (Screengrab image: via Instagram)

Indeed, singing to the Lord in dark places seems to be in Sean Feucht’s DNA, and he doesn’t appear to be intimidated by Antifa’s thugs.

“I’ve led worship a lot with bulletproof vests on,” explained Feucht in an Instagram video, “It is just a calling I have … That’s the lane that God’s called me into…”

The worship leader and artist noted he’s led praise to God in places like North Korea, Iraq, Afghanistan, the Underground Church in China, and “behind enemy lines.”

Feucht also told “any Believers, Christians out there who are ‘progressive,’ ‘woke people,’ whatever you call yourselves; if you are defending Antifa right now, you need to stop! Because these guys are blatantly demonic. We’ve had numerous encounters with them across America…”

According to Feucht, the plans to return to Portland, OR for a night of worship had been in place for four months, but happened to land just after the Antifa attack on Pastor Pawlowski’s gathering. 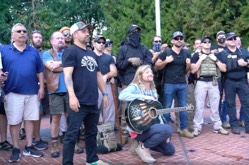 Some had questioned on social media, the apparent security team that was present among the Let Us Worship crowd. Feucht noted that they were all volunteers, some retired military, and NOT the “Proud Boys”. “I don’t even know who that is,” he said in the video. (Screengrab image: via Instagram)

He called Antifa members “COWARDS” because they waited until the worship was over, and people were walking back to their cars before harassing them.

Sean continued to post messages on social media, rallying God’s people in this time: “THIS IS WHY WE CAN’T BACK DOWN!” he wrote in all caps.

“People are scared, addicted, lonely, suicidal and hopeless – AND WE HAVE THE HOPE OF THE WORLD INSIDE OF US!!! It’s time we BOLDLY bring JESUS to the world! 125 cities later and we’re JUST GETTING STARTED!! PORTLAND: I’m so proud of you!!

So many were saved, healed, delivered and freed tonight!!! Don’t listen to the trolls and don’t let ANYTHING hold YOU BACK from sharing the love of JESUS in this season! IT IS REVIVAL SEASON!!!” — Breaking Christian News

Click here to watch Sean’s Instagram video, and view more posts from the Let Us Worship night in Portland.