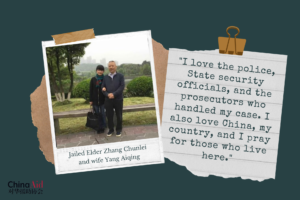 Can you imagine?  Jesus himself said, “It is more blessed to give than to receive.” Yet the Chinese Communist Party considers this criminal!

ChinaAid says that sadly, Elder Zhang’s arrest is just another example of how Chinese officials fabricate accusations and charges to suppress Christianity, raid the homes and apartments of believers, and ultimately arrest many faithful spiritual leaders.

ChinaAid says that after officials originally detained Elder Zhang, they also summoned his wife to the police station.  Her lawyer said she was only released after 24 hours of non-stop interrogation while she was in handcuffs and leg irons!

Lawyer Sui Muqing said Ms. Yang wasn’t even questioned about the fabricated “fraud” charge while her legs were chained.  Rather “the purported summons and interrogation appeared to aim to frighten Ms. Yang by threatening and persecuting her.”

Yet as fellow members in the Lord’s global church, your prayers and steadfast support for our persecuted brothers and sisters is such an encouragement.  Even as he sits in detention, Elder Zhang remembers there are so many faithful believers across the world who believe in the same God and Bible he does.

Elder ZHang said:“The church accepts offerings according to the teaching of the Bible, followed by  churches all over the world. I do not think my behavior constitutes a crime. At the same time, I have no resentment in my heart. I love the police, State security officials, and the prosecutors who handled my case. I also love China, my country, and I pray for those who live here.” — ASSIST News

The author of this story, Michael Ireland, is a self-supported media missionary with ANS. Click here to support him as a missionary journalist.