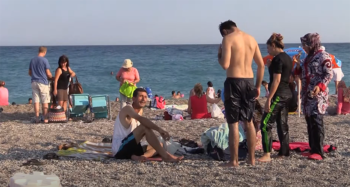 “One nationalist guy, he came to our church service to assassinate me and he was planning to kill me, but we had police protection during that time,” Ramazan says in a Stefanus video. “Police realized that guy was there and they arrested him and they put him in jail.

“After that, police thought that behind this guy there is some group that wants me to be dead. When I was single, I didn’t care very much. But now I am married; I have two kids. When you face persecution and when you know that there are people that want to kill you, that is scary. Sometimes I feel scared and sometimes I feel worried.”

There’s a price to pay for converting to Christianity from a Muslim background in Turkey. Sometimes your family disowns you. Sometimes you can’t find a job because of religious discrimination. When the church first opened, Muslims threw stones at it, Ramazan says.

But the 200 Christians who attend Antalya Evangelical Church remain undaunted.

The only thing Ramazan knew about Christianity was what the Muslim propagandists had told him, for example, the Bible was corrupted and unreliable.

So, when a co-worker came out as Christian, Ramazan was curious to ask for himself.

“I was a member of one of the conservative Islamic groups,” he says. “I practiced my faith five times in a day, and I was a very serious, devout Muslim. I never met any Christians until that time, and then we start to talk about Christianity, he told me a lot of things about Christianity. I was shocked by what he told me because what I had learned all those years from my society about Christianity, everything was wrong.”

At the time, there wasn’t a single church in Antalya, a city of 2 million and a resort destination on the Turkish Riviera. So Ramazan started one in the year 2000.

“Jesus changed my mind and he changed my life,” Ramazan says “Now my goal is to serve Him. I’m pastoring this church, I’m teaching and preaching. But most of my time is more like spending time with people, and there are a lot of visitors that they are coming and visiting our church during the weekdays and I usually sit with them and talk to them hours and hours, because Turkish people are very much interested in spiritual stuff.”

Order up a Turkish coffee and while away the time with Christian apologetics.

Alper Gursu was one of the Turks who engaged in long conversations with Pastor Ramazan about spirituality. Today, he is one of the leaders of the church.

“I had dozens of questions, like is the Bible real? Because I heard that’s changed,” Alper says. “So he started explaining that starting from the third century and the Nicene council he explained to me all the history. He gave me this circle of evidence. All my questions were being answered.”

Pastor Ramazan gave Alper a Bible, and he started reading and ended up getting saved.

Melis Samur is now one of the worship leaders. She got into God because she liked architecture and studied churches. When she found one in her city, she begged her parents to let her go.

“It was a really peaceful, really really beautiful place,” Melis says. “They got really upset at me. They were like, ‘Why do you need another religion?’” 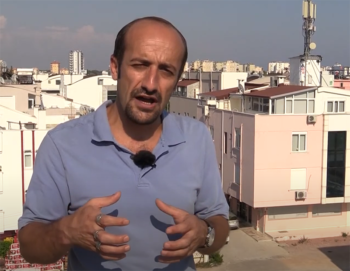 A short-term Christian mission group came through and helped Ramazan establish the work. That’s how he met Karen from the US. Apparently, a little bit more than just evangelism was going on because they got married, and today they have two kids.

Church activities are all-day Sunday, since lots of the members have been disowned by their own families and the church has become their family. After service, they go to a restaurant and then to the beach where they swim in the Mediterranean and play volleyball.

“We share life together like family,” Ramazan says. “Despite difficulties facing the new Christians, the church continues together. I think Christianity is growing in Turkey. When we had this building, it was half this size.”