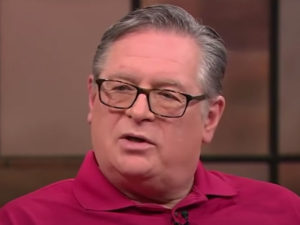 For his dad, Tim Lasebnik was a piñata.

He beat him repeatedly as if he was trying to tear out his insides.

“Dad was just an angry man,” Tim says on a 100 Huntley Street video. “I guess I was his piñata. When Dad lost his cool, there was just no filter. There was no off button. He was truly brutal.”

After being beaten and then locked in the furnace room in the dark for hours, 11-year-old Tim resolved to run away. He packed his little suitcase and the next day instead of going to school he went to a nearby township in Canada.

He was hoping to be adopted by a family or live in a commune, but instead he was preyed upon by a pedophile. The predator pretended to call some nurses who agreed to take him in. Instead, he took Tim to his apartment and raped him brutally.

Those two wounds — the physical and sexual abuse — became his deep, dark secret that was too painful to talk or even think about.

As he matured, Tim turned to drugs to deaden the pain that was chocking his soul. He fell into Rochdale College’s 1968 cooperative experiment in student housing and free college, but it degenerated into a haven for drugs, crime and suicide. 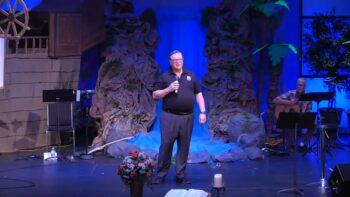 “I was doing everything I could to medicate the pain that I was feeling from my wounds: drugs, alcohol, sex, everything, and I became a drug dealer,” he says. “Rochdale is where I would go to get my drugs.”

One day, his supplier informed he could no longer provide the drugs he needed to sell and consume.

“Because I found the Lord and I’m not doing that anymore,” he responded.

His response was completely off radar for Tim, so he agreed to go to church and see what it was all about.

It was 1972, and St. Paul’s Anglican Church was experiencing revival among the students. The movement was called the Catacombs, named after the underground hideaway of First Century Christians, where they could worship without harassment from Roman persecutors. Thursday night service attracted upwards of 2,000, and Tim went home afterward and fell to his knees.

“I asked Jesus into my heart,” Tim remembers. “And there was a change in me.”

But the wounds were deep and rejuvenation not easy, so he quit Christianity.

“One thing I ask,” he said to the Lord, “is that day when I stand before You on Judgment Day, please remember that I gave it my best shot.”

Years later, he was married with a 3-year-old son and stepdaughter. He was visiting his brother-in-law at Lake Aquitaine, talking, sharing, eating. They lost track of time when his stepdaughter ran in frantically.

“He is drowned in the lake…”

Barefoot, Tim ran out into the frigid March waters.

He arrived as a stranger was coming out of the water with Tim’s son in his arms.

Tim grabbed the child, carried him to shore and tried to administer CPR. The child had been underwater for five minutes. There was no response.

Continuing in his attempt to revive him, Tim managed to expel not only water but also seaweed from inside.

The story made the front page of the Toronto Sun two Sundays in a row.

This time, he dealt with the wounds.

He went to a Christian retreat called Band of Brothers Bootcamp. Away from distractions, Tim searched deep within his heart, seeking healing for years of pain he harbored within.

“I was in a cocoon of love,” he remembers. “God was speaking to me, ‘You’ve carried that wound long enough. Give it to me.’

Tim noticed the similitude as he expelled years of compounded pain choking his soul, and his son’s expelling water and seaweed.

Could he trust God?

Tim dared to forgive — his dad, the sexual predator, himself and God.

“There was like that junk was just coming out of me, just pouring out,” Tim says. “I had to forgive God. I had been angry at God for all those years.”