When the communist Eastern Bloc dissolved, Mongolia, the land of Genghis Khan, saw a resurgence of Buddhism. But another religion has taken root and is steadily growing, Christianity.

Newfound religious freedom after decades of communist/atheistic repression led to thousands coming to Christ, with over 50,000 followers of Jesus in a country of 3.2 million, or roughly 1.8% of the population, according to Joshua Project.

The growth of the evangelical community at 7.9% a year is outpacing most countries. 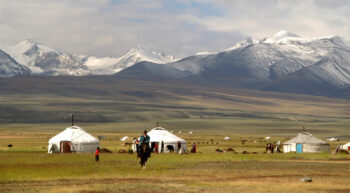 Surprisingly, young people see Christianity as hip, according to a Jouneyman Pictures video, “From Genghis to God: Christianity takes Mongolia by Storm.”

“Christianity, never destroys a culture; it will remove things from a culture that are holding it back, essentially that are killing its people, that are making life miserable.” says Paul Swartzendruber, with Eagle TV.

Land-locked Mongolia in East Asia was the birthplace to Genghis Kahn, who conquered all the way to Europe during the Middle Ages. After his decline, the region fell into oblivion and remained a nation of nomads and herdsmen.

In the 1920s, the Soviet Union annexed Mongolia and promulgated a “worker’s paradise” led by government. The religion of Marx and Lenin admitted no competition, so they stamped out all other religions. Buddhists were systemically decimated; a bloody purge wiped out 17,000 monks.

Then, communism fell in 1990 and religious freedom suddenly became a reality. People were free to practice Buddhism. Christian missionaries, eager to preach on virgin soil, arrived in droves.

They saw Buddhism as the religion of the older generation. Christianity emerged as the faith of the younger generation.

Christianity’s growth is seen mostly clearly by the criticism directed by “His Holiness the 14th Dalai Lama,” the Tibetan people’s foremost leader and revered Buddhist leader.

Bolarchimeg was 16 years old when she started attending Hope Church in Ulaanbaatar, the capital of Mongolia.

“My mother was against me going to church,” Bolarchimeg says. “She said, ‘You are wasting your time on these useless activities like reading the Bible every day. Wouldn’t it be better to spend that time on your study?’ God gave me the power to get through.”

A decade after the missionaries arrived, they have largely disappeared. The Mongolians took over as leaders of the church.

Mugi was sent for training in Singapore before returning to take the mantle of leadership.

“That is a real impact, and that is drawing a lot of people, and people are seeing that hey, it’s not just a foreign thing,” Mugi says. “Our locals are talking about this, our locals are really thinking about this and really challenging people to come to Christ.”

Lacking a strong autonomous economy, many Mongolians are poor and look to Western Christians to help them. The practical aid makes the locals receptive to the teachings of Christians.

Proving that Christianity has jumped from cities to the grasslands, Alex Snary, an aid worker from a small Pentecostal church in New Zealand, gives rural herdsmen micro loans so they can become self-sufficient income-earners.

Herdswoman Erdenesuren has learned: “There is no power in religion, no matter how many times you pray. There is no mercy in religion. But God is different. If you ask for God’s help God will change your life right away. God will do everything in his power.”