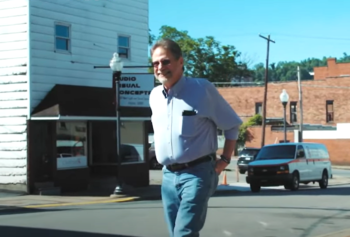 Dr. Lou Ortenzio derived satisfaction from serving his patients in Clarksburg, West Virginia. Maybe, he got too much satisfaction because he was working 16-hour days.

“I felt like I had to perform at such a high level, be 10 feet tall, bulletproof and faster than a speeding locomotive and trying to make your patients happy,” he says on a CBN video. “I did take good care of people, I really cared about them and they knew that I cared.”

Ironically, caring for others made him neglect his family and himself.

“My wife certainly never saw me. The children hardly knew who I was,” he says. 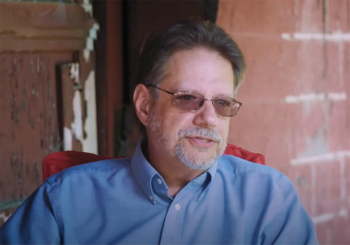 What drove him to unreasonable exertions?

“At my core I didn’t love myself,” he says. “I needed everyone else to love me to make me feel adequate.”

Inevitably, the life he built in the idyllic mountain town from 1982 onward began to crumble under the strain.

His wife took the kids, separated from him and moved to Pittsburgh. It was supposed to provoke a change in him and bring about a reconciliation. Instead, they divorced.

Lou didn’t know what to do, so he did the only thing he had ever done. He kept working beyond overtime.

One night working late hours, he felt an excruciating headache. Over the counter meds did nothing to alleviate the pain, so he reached for something stronger: Vicodin.

Vicodin is a potent pain reliever used commonly for people after surgery. It belongs to the class of drugs known as opioids, which have plunged America into a drug addiction crisis.

Being a doctor, Lou felt like he could keep it under control but eventually it turned into unmitigated addiction. He was doctor, so he prescribed it for himself.

“You think you’re superman, and you think you can do that and control it,” he says.

A decade later, Lou was downing 40 pills a day.

“There was pressure coming in from everywhere,” he says. “I’d failed as a husband. I’d failed as a father; my practice wasn’t going well. And I realized that I could not stop using medication. I couldn’t stop using the opiates. I was stuck.”

One night in the fall of 2002, he decided to take his life. He saw no escape, so he vowed to close the garage behind his parked car, leave the engine running and wait for the carbon monoxide to make him drift off in a bliss sleep that would kill him.

For some strange reason, it didn’t work.

Not even suicide worked. In despair, he cried out to God.

“God, I really don’t know or understand,” he prayed. “God, take me out of this mess. I can’t do this anymore. You’ve got to do something.”

At work the next day, they saved a crash victim in ICU. Then a friend, Nurse Donetta, saved him.

He was an emotional wreck and she was serene. He asked her where she derived her peace, and she said, “Jesus.” Donetta invited Lou to church.

After attending church for a few Sundays, Lou realized, “I had messed up terribly and I needed to be forgiven. I asked Donetta, ‘How do I be forgiven,’ and she said, ‘You just get forgiven for just asking.’”

Again, Lou cried out to God.

After a few weeks, he accepted Jesus, not in church but with a patient. He confided that he still had not accepted the Lord into his heart.

The patient responded, “Well let’s do that right now. Get down on your knees. I’ll get down with you and we’ll pray.”

That was it. In an instant, God transformed Lou.

“I got up off the floor, feeling like really legitimately 10 feet tall and bulletproof, but only with Jesus, only with that power,” Lou remembers.

He had lost his medical license for the fraudulent prescriptions. He was eligible to apply for reinstatement, but instead he felt called to continue performing the community service he started as a punishment for prescription fraud. He was helping people recover from drug addiction.

“I was able to take that community service and turn that into ministry to extend all this to help someone else,” he says.

Today, Lou serves as executive director of the Clarksburg Mission, helping those who need shelter, food and hope in Jesus.

“It doesn’t make any sense how my life ended up like this,” Lou says. “It only makes sense in the kingdom of God.”