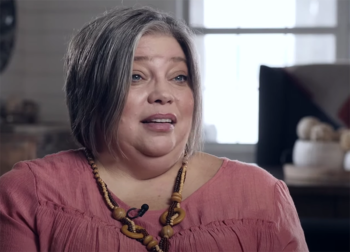 To pay bills, Mom prostituted BJ Garrett as a sex worker until she turned 15.

“I had no healthy concept of love,” BJ says on a 700 Club video. “Love was very sexual to me. I just remember feeling very ugly, very alone, very unwanted.”

BJ’s journey through the moral sewers of America started with abuse from her own father.

“My dad did things that no dad is supposed to do to his little girl,” she says.

Her mother stopped pimping her when she got pregnant as an adolescent by her boyfriend. Having a baby represented the first ray of hope in her life. Finally, there was someone who would give her pure love, and to whom she could give pure love.

“I wanted to be wanted and having a baby fulfilled that — she was going to be perfect and lovely and love me unconditionally,” she says.

Her boyfriend abandoned her, however, and later she found herself pregnant with another teenage boyfriend, but that relationship also soured because the young man was not ready for the responsibility of fatherhood.

“All he said was, ‘I don’t want to be a dad,’” she remembers. “And I just thought there’s no way I will ever let my child feel even for a moment the way I felt my whole life.”

The answer was abortion.

“I really thought I was doing the very best thing for my baby by having an abortion,” BJ says.

“It was like just a little section of my heart was to never beat again,” she recounts, grappling with her unexpected emotions. “I was the dirty, ugly, gross, vile human being that now just put this ugly cherry on top by ending my own baby’s life.”

At 19, BJ had a second child, and paying bills became her chief concern. Sadly, she turned to an income source that was available for someone with no education or training – she entered the adult entertainment business and became a sex worker on the side.

“I was mom by day and and stripper and prostitute by night,” she says. “My body had been used my whole life to pay for things, but it was always forced upon me. Now I was in control.”

But “being in control” didn’t mean she was happy.

“With every song, every dollar, every set, I just got more cold-hearted,” she says.

At age 21, she got pregnant by a client. With the hardness of heart of a professional sex worker, she expeditiously terminated that pregnancy.

“My heart was just an ice ball,” she says. “I was so far removed from the reality of anything.”

After a few years, BJ reconnected with a childhood friend at a wedding. Jay was different from any other man she had known. They dated and she fell in love.

When she got pregnant by him, she assumed the worst.

But when she blurted out that she was pregnant, Jay had a different reaction.

They married immediately, and BJ stopped prostituting herself and only danced when they needed money.

Things finally began to change when the couple moved to Bullard, Texas. BJ took a job at a tea shop owned by a Christian couple. 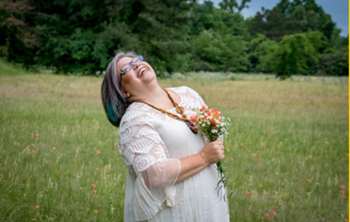 “They were loving and just normal people that loved Jesus,” BJ says. “They began to love me and pour into me. They didn’t know any of my past and they finally invited me to church. Church seemed like a safe place.”

After attending for some time, BJ answered an altar call to receive Jesus in her heart. She repented of her sins and asked for God’s forgiveness.

She surrendered her life to Jesus as her Lord and Savior and was born again.

Even after experiencing the new birth in Jesus, she still struggled with dark feelings from her past.

“I just always felt so dirty, so ugly, so gross, so vile,” she says.

Then she got baptized and those feelings washed away supernaturally.

Therefore we were buried with Him through baptism into death, that just as Christ was raised from the dead by the glory of the Father, even so we also should walk in newness of life. (Romans 6:4)

“I was clean,” BJ says. “I could physically feel all of that ugly being washed away.”

After truly feeling God’s forgiveness, BJ was able to forgive her parents. Her husband Jay came to Christ as well.

ow serves as the executive director of Christ Center Abortion Recovery and Education, which aims to avoid any child feeling unwanted.

“The reality is I never was unwanted (by God),” BJ says. “Love should never cost you anything. But real love cost Jesus everything so that we could experience pure love.”