Benign tumors growing on his larynx require surgeries every three months leaving his voice so weak that his low voice drops off into a whisper constantly. Called Whispering Danny, he’s also a popular tattoo artist in Kansas City, Missouri.

Danny Kobzantsev was a hard-living immigrant from Latvia who hailed from Jewish survivors of the Nazi Holocaust. But when his good friend Shane crashed drunk on his motorcycle and very nearly died, he found himself praying to Jesus for a simple reason:

“It seemed like the thing to do,” he says on an I Am Second video.

Danny Kobzantev came to America with his mother in 1975 to seek better options for treatment of his unusual medical condition. As the plane circled the Statue of Liberty, people were hugging and kissing. 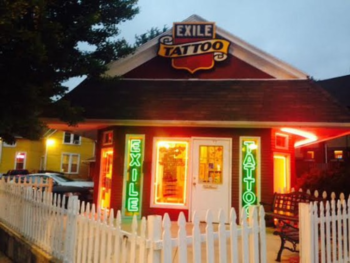 “I didn’t know who or what the Statue of Liberty was, but she was the symbol of America and freedom,” he says.

Danny and his mother set up shop in Kansas City, MO. In high school, he was drawn to tattooing. The more ink he got on his arm, the more he realized he wanted to become a tattoo artist.

“I lived a lifestyle that was pretty self-destructive in many ways and I was okay with it,” Danny says. “I pretty much had completely abandoned anything pertaining to God, and I just pursued my own interests.”

At Exile Tattoo shop, his drinking buddy Shane Kampe roared up on his motorcycle Sept. 4, 2001. He was drunk and had no business riding that day. So when Shane tried to drive off, Danny attempted to dissuade him.

“I watched him try to get on his motorcycle and I immediately saw him drop the bike cuz he was so drunk,” he says. “I begged him, ‘Please Shane don’t do this.’”

A couple hours later, Danny inexplicably felt compelled to go for a drive. He had nowhere to go but he arrived exactly where God wanted him: at the accident scene of his friend.

Shane was lying facedown in a pool of his own blood, his skull fractured open.

“His head was busted wide open,” Danny recalls. “He was laying in a pool of dark, dark blood.”

Shane bent down next to his buddy, even getting his own face bloody, and whispered, “Shane, you’re going to be ok.”

It was a lie. From what he surmised from the injuries, there was no hope. Still he tried to encourage his friend. 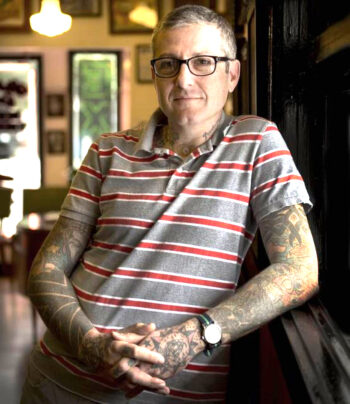 “It seemed like the thing to say,” Danny says.

Danny stayed in the waiting room while surgeons in ER tried to save Shane. It was hopeless, and Danny overheard someone talk about harvesting his organs for transplant. Shane’s mother, meanwhile, pleaded with God for just one more day of life to be with her son.

“Finally, the doctors came out and they said he’s still alive, but he won’t be for long,” Danny says.

Then a man who Danny didn’t recognize came into the waiting room and called all the people to pray for Shane.

The man said, “Gather round gather round. We’re gonna have a prayer circle.”

“Oh great God in heaven,” the man continued, “we have a situation here at St. Luke’s hospital. This young man Shane is so broken that no man on earth can fix and his brain has been busted, but, God, we know You can fix him. So won’t you please fix him? And by the way we need him fixed before tomorrow morning.”

“So I said ‘amen’ too,” Danny remembers. “It seemed like the thing to do.”

But then he thought, Do I even believe in God? Am I just talking to himself? Why would God heal Shane?

Wondering, he searched Google for the term “salvation.”

The website asked him if he realized he was a sinner. He had no problem recognizing his sin. He had made no bones about it.

There was a prayer of salvation at the end and Danny scanned it to make sure he wouldn’t be scammed. It didn’t appear to have any bad information, just interesting stuff about Jesus’ death on the cross. So Danny prayed it. It seemed harmless. The website said he was forgiven, part of God’s family now. That seemed decent. It wasn’t so bad.

Danny prayed it a second time, this time more sincerely.

He was meditating on God when he heard a hubbub coming from the doctors.

“Doctors and nurses running around frantic. The doctors were yelling at the nurses,” he says. “Obviously they had the wrong cat scan or the wrong MRI, they were saying.”

“My friend Shane woke up. It was impossible for this guy to have woken up, but there he was wide awake.”

Danny couldn’t deny what had happened, even though he initially had a feeling like he was betraying his Jewish heritage. The feelings of guilt were worsened by the fact that his grandparents were Holocaust survivors.

But Jesus was Jewish too.

And the Jewish Messiah Jesus had performed an undeniable miracle.

“The guilt that I felt about betraying my family or my ancestry I’ve actually completely lost,” he says. “A void is filled. There is nothing else like it. It’s not just religious stuff. You now have a genuine interaction. You get answered, you get guidance. I cannot deny something that has revealed itself to be true to me.”