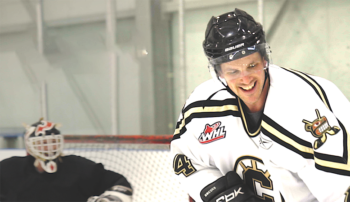 Matt Cline’s agent gave him certainty: “You will be drafted” in a Canadian Western Hockey League.

But then Matt went inexplicably into a scoring dry spell.

“I had 103 points in 27 games,” he says on a This is Me video. “But after Christmas I started struggling a bit. There was a mental block and I couldn’t produce like I did before, and I wasn’t confident making plays.”

To make matters worse, in his second season, while he was still draftable, a big defensive player skated up to him, when he hurled the puck around the backboard and “checked” him — which means he crashed into him with his whole body at high speed. Roughing up players is common in hockey and is meant to intimidate opponents and throw them off their game. 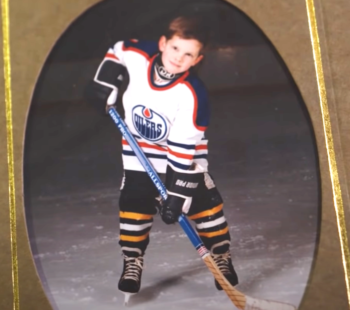 “My head just felt like it was 200 pounds and was just pounding,” Matt says. “It was a pain that to that point in my life I had never felt a pain before. I lay on the ice, and I remember that the crowd was silent and the place stopped and my trainer came running out. I just couldn’t figure out how to think. I couldn’t process what was going on.”

He missed the rest of the season.

He wanted to start his third and final draftable season but couldn’t. Finally, he left the team for good and returned home.

“I didn’t really cry early on to my injury,” he remembers. “But I cried when I left. I remember just thinking like, ‘What’s next for me? Who am I?’ From the time I was five years old, all I had ever thought about and done was hockey.

At his parents’, he was comforted by Matthew 6, which he stumbled across in an open Bible on the kitchen island: “Do not worry, for who of you by worrying will add a single hour to your life?”

Out of his schooling he started a business, but God called him to walk away from success.

When he met a girl and things seemed to get serious, he decided to share with her his besetting sin.

“I didn’t want to have a relationship with secrets, and so I went for it and I told he,” he recalls. I “It literally felt like a million pounds had been lifted off my shoulders because finally the secret was out. Every time I told someone, it became a little bit easier to confess and the shame started dwindling in my life because I realized that people are loving me when they know my secret.”

“I’m gonna seek Jesus with everything,” he decided. “Even through the disappointments and want all the time,” he says. “So then when you get in a relationship and you have these expectations on your partner, it’s so damaging.”

But Matt had no inkling about how to start a ministry. He began networking with pastors and got speaking engagements. The invitations began to multiply like loaves and fishes.

“God wants men to live free now from their sexual behavior,” Matt says. “If you’re struggling with pornography, there’s a purpose and there’s hope for you. Seek somebody out to continue to find out what are the things driving you towards your behavior. Continue to pray and never give up.

“You’re too valuable to have this thing destroying your life.”