Over and over again, Michaela Lanning came to sleep on Grandma’s couch, amid the piles of hoarded rubbish, toxic mold and asbestos on the ripped carpet.

Without support, Mom kept getting evicted, which led to all sorts of confusion for the children and instability.

In the fifth grade, Michaela got bullied because she wasn’t doing the girlish things of other girls. She was just trying to deal with her mom’s anxiety attacks and make meals of popcorn.

“I would have to put Mom to bed, and I was terrified that she was gonna die,” Michaela remembers. “Like I would tuck her in every night, because I thought that would save her from dying.” 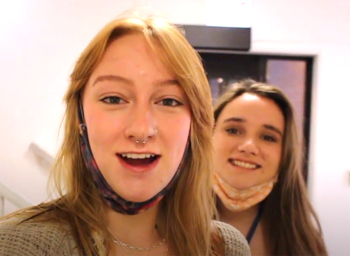 Her mom recovered from the breakdown, but Michaela broke down and began cutting herself as a coping mechanism in the sixth grade.

In the seventh grade, she developed dissociative disorder.

Every day she was in the school nurse’s office and invented reasons to be sent home, usually because of a stomachache or headache.

In the eighth grade, she took classes online because leaving the house gave her panic attacks.

“Things were getting really bad with my parents,” she says. “One time my dad was watching my sister and I, and he chased us down the hall with a knife. Yeah, we moved back in with my grandma. 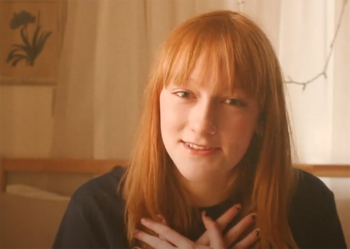 “My sister and I were sleeping in the living room on two couches, which were probably from the 80s. They were covered in dog pee. They were filthy; they had holes in them. That’s what we slept on for four more years. No bed, no bedroom, no dad, nothing.”

Looking for validation in high school, she “came out” as bisexual and later as lesbian. It was an artsy high school, not a football high school, and that’s where she thought she could find support and sort out the chaos in her mind.

As the founder of the Gay-Straight Alliance, she hung out with transgenders and related to all their confusion and was being heavily influenced to change her thinking.

“I felt all of those things and I, in my brokenness and my self-harm and my eating disorder and my anxiety, all of it was coming together, and I said yeah that sounds right: I’m transgender,” she recalls. She came out as a transgender man, told everyone she wanted to be called a different name, and started seeing a gender therapist

“But in my core I knew I wasn’t transgender the whole time. What I needed was a savior. It’s just I did not know that at the time.”

When she had a nervous breakdown, Michaela dropped out of school and dropped the transgender ploy.

In her sophomore year, she attended an “alternative high school,” where the druggies and pregnant teens are sent.

“I did not meet a single kid there that did not do drugs, or at least vape,” she says. She started smoking marijuana and met a friend who persuaded her to get pregnant so they could be teen moms together.

“She was the kind of person that goes out every single weekend and hooks up with guys and does things for money,” Michaela remembers. “I was just chasing anything that would fill my heart and make me feel better. I was like, ‘That makes so much sense. I should do that. I would love to have a baby.’”

The “sperm donor” was found and the site they chose for her impregnation was a tent on the high school football field, but Michaela didn’t get pregnant. Eventually, she dropped that friend, started getting bullied and dropped out of school again.

The next year she moved in with a friend whose mom provided them with alcohol. Michaela was smoking marijuana and drinking and got a boyfriend through an app. When he sexually assaulted her, it unleashed nightmares and flashbacks and she broke up with him.

In her junior year, she was taking a world religions class and considered filling the void in her heart by converting to Islam or to Judaism. Her father’s insincere brush with Christianity years earlier had turned her off to Jesus.

Nevertheless, one day on a whim, she started googling churches and found Red Rocks Church. She had not attended a church in four years.

But from the moment she entered the church she sensed the presence of God and felt the Holy Spirit move on her heart. She could feel Christ’s love in the air.

During worship she raised her arms in surrender, felt the Holy Spirit come upon her, and surrendered her life to Jesus Christ. Later, she got baptized and sensed God’s call into ministry.