On December 21st, Jupiter and Saturn appeared closer in Earth’s night sky than they have since 1226 A.D., leading to a dazzling display in the heavens reminiscent of the star that guided wise men to the baby Jesus.

Astronomers are calling it the Great Conjunction of 2020. It appeared on the same day as the winter solstice, to the delight of stargazers, astronomers, and people of faith around the world.

During the event, Jupiter and Saturn appeared to be only 0.1 degrees apart, about one-fifth the width of the Moon. 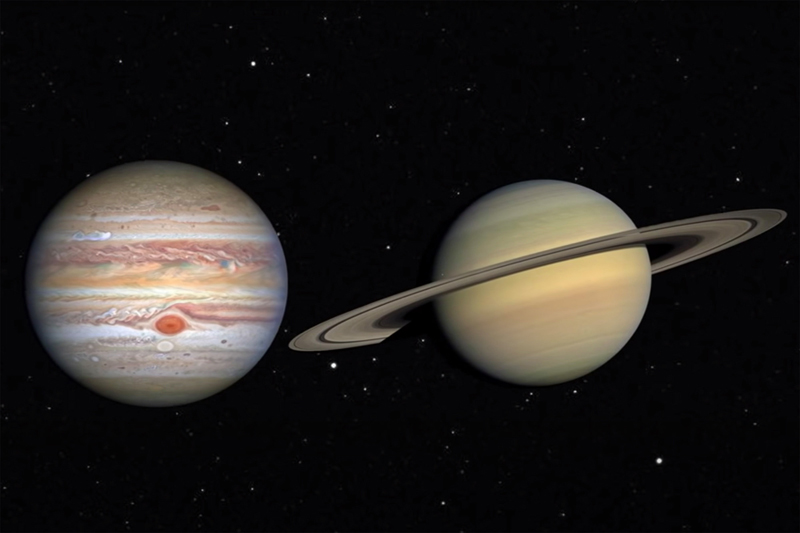 Jupiter and Saturn (astronomy.com)Some astronomers believe that the Star of Bethlehem in the Bible involved a juxtaposition of Jupiter, Saturn and Mars.

“That’s an incredibly rare occurrence. The last time Jupiter and Saturn were this close together…Genghis Khan was conquering large swaths of Asia, and Europe was still generations away from the Renaissance,” according to astronomy.com.

The next Great Conjunction will happen in 2080.

Those with a good telescope were able to zoom in and see Jupiter’s four moons — Europa, Io, Callisto and Ganymede.

Neal Harmon, the CEO of Vidangel watched the event at his in-laws through a telescope. “Last night we watched Jupiter and Saturn align on the Winter Solstice, the darkest and the shortest day of the year, where we had this heavenly event occur,” he told Newsmax.

“Not to ascribe any particular meaning to it, it caused us to think about how the heavens testify of hope and the timing of this star in the year 2020 makes me smile. It is time to look to the future and have hope.”