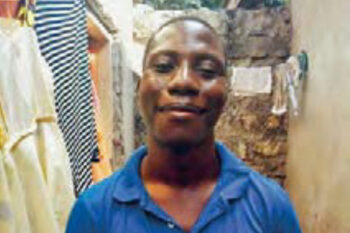 He taught the Quran to children and painted many of the mosques in his area to earn a livelihood. But a “chance” encounter with street evangelists triggered a season of change.

“I had never entered a Christian church in my life,” Ali Mohammad told African Enterprise (AE). He was born into a Muslim family and now, at age 28, was married with two children, raising his own Muslim family.

His life was deeply interwoven in the local Islamic community. “I was fully convinced I was going in the right direction in my life. No one would convince me otherwise,” he told AE.

Before major Islamic festivals, Ali was responsible for painting mosques in the area. This work helped to support his family and he often received furniture and other gifts from the mosque as payment.

One morning on his way to a painting job at the mosque, Ali happened to run into some evangelists in the street. “They told me they were preachers and they were sharing the word of God with the residents of Malindi town,” Ali told AE.

“Of course, I knew I would not give them much of my time.” He said he was a Muslim and had no interest in Christianity, but they were persistent and he decided to let them continue.

“They talked about eternal life and Jesus Christ. I am not sure how or why, but I did not bring up the usual arguments,” Ali recounted. “For some reason, that day, I was interested.”

The Holy Spirit began to move on his heart and for the rest of the day, Ali couldn’t stop thinking about his conversation with the men.

“The words of the evangelists were still in my mind,” he said. “I had no peace.”

His wife noticed he was not himself. When she asked what troubled him, he told her what happened in the street.

When he went to the church, initially he was rebuffed by a guard at the front door. The church was on edge due to attacks by Islamic extremists against churches in Kenya. “The security guard at the church gate had endless questions,” he recalled. “They really interrogated me. I do not blame them; they were taking precautions.”

Ali persisted in his request to speak to the pastor and finally he came out to meet him.

Then Ali shared his surprising story. “I want to know Jesus,” he told the pastor.

The pastor explained the gospel message to Ali, that all of us have sinned and fallen short of the glory of God, that the wages of sin is death, and that the only provision to cover the penalty for man’s sin is the shed blood of Jesus on the cross. By trusting in what Jesus did on the cross, we can have assurance of eternal life.

Ali repented of his sins and prayed to receive Jesus as his Savior and Lord as he stood in the churchyard for the first time.

“I felt like a load had been lifted from my shoulders,” Ali told AE. “New joy and peace had entered my heart and I knew I was born again.”

Filled with joy, he ran home to tell his wife, Mariam, and insisted she go with him to the church. Unlike her husband, Mariam had been raised as a Christian but converted to Islam when she married Ali.

“I knew down in my heart that I had not done the right thing in running away from God,” she said. “I felt so empty and hopeless as a Muslim.” But she had been praying that her husband would become a Christian.

“I doubted it would happen,” she said. “But when my husband came back that afternoon and informed me he had made commitment for salvation, I was shocked.” When she went to the church she met with the pastor and gave her life to Christ as well.

Their newfound faith met opposition from the Islamic community when it was discovered. “The Mosque repossessed the furniture that had been donated to the family and demanded that they move out of their home, but they were undeterred,” according to the report by AE.

“When they took all our household items and we were asked to leave the house that we had been given, I expected that.” Mariam said. “I needed a new beginning. I could feel my husband’s determination to remain in Jesus. It was such a passion.”

The couple’s new church lent their assistance – finding them a new home and helping Ali find a job. “I saw the love of Christ at the very beginning of my walk with Him demonstrated by the brethren from the Church,” Ali said.

“This couple’s life and the lives of their children, have been completely changed. All because of a few men who stopped Ali on the road and shared the truth of Jesus,” according to the report.

“I found the light,” Ali said, “and I can’t return to the dark. I am so ready to share the light with as many people as possible!”

“Surely salvation has brought more things than I had asked,” Marian exclaimed. “I am so happy to have been reunited with my Savior, Jesus Christ.”