“The kingdom of heaven is like treasure hidden in a field. When a man found it, he hid it again, and then in his joy went and sold all he had and bought that field.”

Terry Herbert, a 55-year-old unemployed former coffin worker, found a remarkable 1,300-year-old treasure in a field owned by a friend in Staffordshire, England using a metal detector he purchased for only three euros.

Discovered in July, Herbert filled 244 bags with some 1,500 pieces of the glimmering treasure that scholars say may shake up our understanding of Saxon Britain, according to a report by the Daily Mail.

Herbert had entered into a written contract with the landowner, Fred Johnson, agreeing to split any finds on his land.

The spectacular discovery includes early Christian crosses fashioned in gold, along with a gold bracelet with a biblical inscription in Latin that reads: “Rise up, O Lord, and may thy enemies be scattered and those who hate thee be driven from thy face.” (Numbers 10:35)

The quotation came from Moses, when the ark set out from the camp at Sinai, and a cloud sheltered the tribes of Israel from the desert sun and a pillar of fire provided warmth and lit the night sky.

Some scholars compared the find to the Lindisfarne Gospels or Book of Kells, which are beautifully illuminated manuscripts of the four gospels from the 8th and 9th centuries.

The gold objects found among the treasure weigh more than 11 pounds. 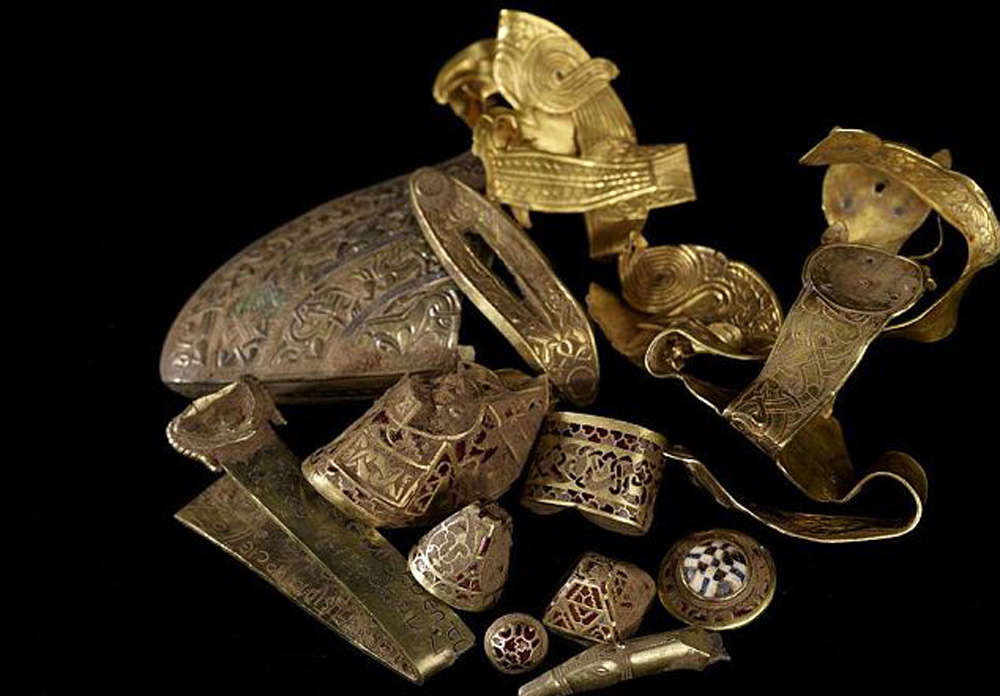 Herbert prayed aloud before his hunting and believes he may have had supernatural guidance that day. “I think somebody was listening and directed me to it. Maybe it was meant to be, maybe the gold had my name on it all along,” he told the Daily Mail.

Museum officials were ecstatic about the find. “Everyone is completely knocked back,” Roger Bland, a senior antiquities curator at the British Museum, told the Daily Mail. “These are absolutely unique objects.”

Some have surmised that jewels in the treasure were carried from Sri Lanka to England by European traders.

The gold may have came from the Byzantine Empire, the eastern remnant of the Roman Empire based in Constantinople (Istanbul).

Leslie Webster, former keeper at the British Museum’s Department of Prehistory and Europe, said he believes the discovery will bring new insights into Saxon life.

“This will change our understanding of the dates of early Christian manuscripts, our perceptions of seventh-century people and where power lay,” he told the Daily Mail.

Some of the objects were lying on top of the soil, others were just below the surface.

The future of the hoard, officially declared as “treasure” by the government means it may become Crown property and be divided among various museums.

Some of the collection’s other highlights:

FOLDED CROSSES: The largest of two or three crosses in the treasure may have been from an altar or processional piece. Because the large cross was folded, some suggest it was buried by pagans.

SWORD HILT FITTINGS: At least 84 pommel caps and 71 sword hilt collars have been identified so far. They would have adorned a sword or short sword or knife. Their elaborate decoration with gold inlaid with garnets suggests the weapons once belonged to nobility.