The camp was held at Gereja GPID Patmos Church in Jono Oge, located about six miles south of Palu. Every year as many as 100 children gather for an annual catechism organized by the Protestant community in Palu. This year they chose the small village of Jone Oge for the Bible camp.

When the quake struck, some students were sharing dinner in the auditorium. “The building fell on top of most,” Lidya Mauren, 27, told Minuto Mercedes. His 17-year-old sister perished in the calamity.

Dozens of children were trapped on the ground floor. The catastrophe worsened when the seismic movement caused liquefaction of the soil and the entire area was transformed into a sea of ​​mud.

“The land began moving, and it was like the church was swallowed up,” Douglas Simamora, 16, told the Wall Street Journal (WSJ).

Simamora, one of the few survivors, was playing soccer on a break from the

Bible camp outside the Jono Oge Protestant Church. As the quake intensified, the solid ground beneath his feet began to liquefy.

He and his friends ran to a grouping of trees where the ground seemed solid, while buildings and homes slipped past and disappeared. They watched as the narrow A-frame Protestant church was carried away.

Then their tiny island dislodged and began floating amidst the river of muddy debris. “I told God, if this is the end, I am ready to die.”

His island floated along like Noah’s Ark, coming to rest a mile away from where the church once stood.

The church also floated for a mile and came to rest face up, with most of the structure broken apart or swallowed beneath the surface.

The boys who managed to escape said children trapped in the rubble shouted: “Help! Help!” They also said the children cried out: “Mamí, Mami!”

The first rescuers from Palu had to walk for more than an hour and a half through a “swamp” trying to avoid mud pools. Many making the journey ended up trapped in mud up to their knees “This is very dangerous. They (the mud pools) look like quick sand,” Rifki Hasan told Minuto Mercedes.

“The biggest challenge was to cross the mud on foot while transporting the bodies to the ambulance,” said Aulia Arriani, a spokeswoman for the Red Cross.

The stench of death lingered in the air for days, while rescue teams still searched for more than 80 young people who are feared dead, according to Minuto Mercedes.

Jonathan Griffin, an earthquake scientist at the University of Otago in New Zealand observed that blocks of land can travel intact, carrying along houses, cars, corn fields or whatever is on top, then pile on top of one another.

Also, underground water may be forced upward, carrying mud or sand; witnesses in Palu describe mud surging out of cracks in the earth, like something from the pages of the Old Testament.

Muis Pangallo watched the digging through the remains of the church, hoping to recover the body of his daughter, Sharon Parilla, 17, one of those attending the Bible camp.

“Yesterday I found her jacket,” Pangallo told NBC, 45, his voice breaking with emotion, “I hope I can find her just to see her again.” He carried photos of young people attending the catechism.

Rescuers found a Bible opened to the first chapter of Genesis: “And the earth was without order and empty, and the darkness covered the surface of the abyss …” which seemed to be a metaphor for the chaos that fell that day on the small village.

Near the Bible was a notebook that belonged to one girl who died. “My name is Angelita Yolia Vorang. You can call me angel,” she wrote. “My hobbies are singing and rapping. I was born in this city (Palu). I’m 15 years old. I love the music of Billie Eilish. His songs are darn good. You should listen to them. I also hate false people.”

Parents of the students who didn’t know each another before the quake, spent several days sharing stories about their children. 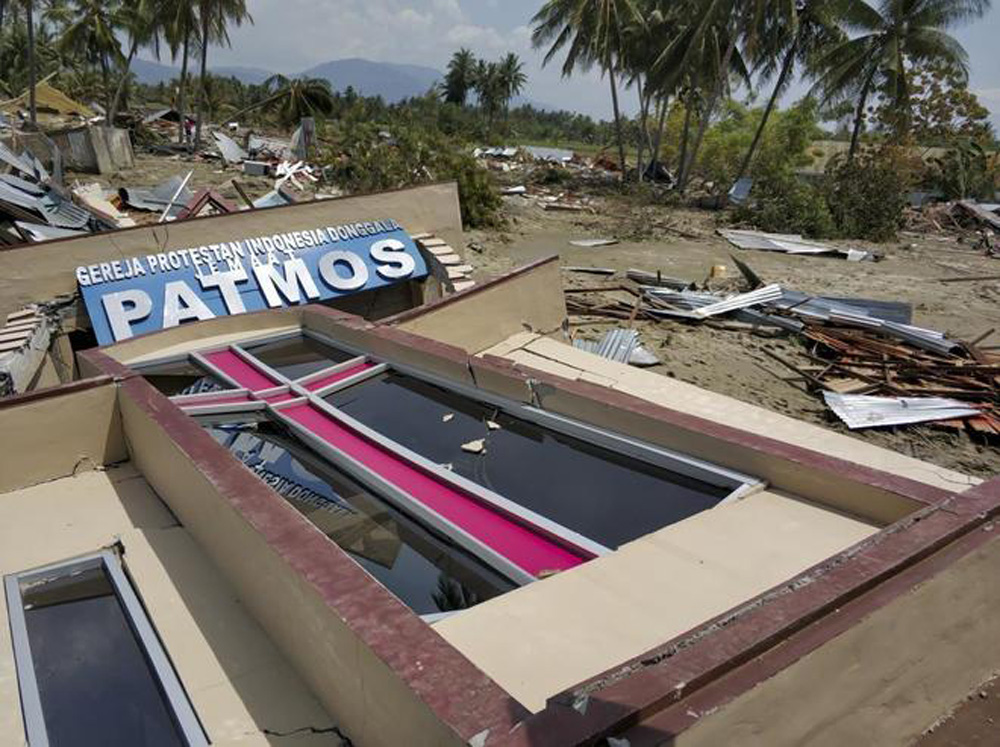 One 17-year-old girl, Gabriella Cesilia — known to her friends and family as Gaby — was preparing for an all-night prayer vigil when the quake struck.

Her mother went to the hospital where bodies were being stored before mass burials. She opened every body bag, and then opened them and checked a second time, to make sure her daughter was not among the dead, she told the Washington Post.

“If she is still alive, thank God, it’s a miracle,” she said. “But even if she died, let us have their bodies for us to bury. That’s our only hope.”