When Ferry Mamangkey had a liver health scare he knew he needed a miracle. Now many prayers and “miracles” later, the recovered 62-year-old evangelist has become ‘Indonesia’s Billy Graham’ traveling through often remote areas of this diverse archipelago of thousands of islands. “My healing was a miracle. The Lord touched me in my home. Now I am praying for the sick as part of the Gospel outreach.”

Mamangkey, a married father, has been reaching huge crowds with the good news of the Gospel.

He is one of the most prominent evangelists in Indonesia. “I have been praying to God that He will provide me with finances to meet all the invitations I have received,” he told BosNewsLife.

Despite a crackdown on churches by Muslim hardliners in more remote areas of Indonesia, he manages to organize evangelistic meetings with tens of thousands attending. That involves tough negotiations with village authorities. Receiving permission for massive open-air or closed events isn’t easy in Indonesia, the world’s largest Muslim nation. “But we go out to the streets with pamphlets, telling the people that they should come at night to see the evangelism campaign for themselves.”

Not without results. “Usually they receive the Lord, there is baptism, and then they start a church.”

But then the problems begin. “The congregations grow faster than we can build buildings and receive permissions. It is a big challenge to evangelize,” Mamangkey added. He spoke while on his way to outreaches in regions such as Papua, the largest and easternmost province of Indonesia.

Even in Jakarta, the capital, evangelistic church meetings are a challenging experience. In recent days, BosNewsLife was led onto the top floor of a cramped apartment and office building where an enthusiastic band, backed by a small boy playing drums, accompanied the worshipers singing Gospel songs during a vibrant Sunday service.

Outsiders are welcome here and invited to accept Christ or “be healed” of sickness and other pains. A BosNewsLife reporter was asked to preach, a time he used to encourage worshipers to keep their faith and pray for the West where churches, unlike in Indonesia, are often nearly empty or closing.

Fanatics once torched the complex here. But after renovations, the church continued its services anyway, a Christian said. It was time for the Lord’s Supper involving Christians distributing bread and small plastic cups containing fruit juice. Wine is prohibitively expensive.

Mamangkey is part of the Pentecostal Church in Indonesia or ‘Gereja Pantekosta di Indonesia’ (GPdI), which was founded by Dutch missionaries in 1921, and claims to have up to 4 million members. It has ties to the International Church of the Foursquare Gospel (ICFG), the evangelical U.S.-based Pentecostal denomination with a reported membership of over 8 million people spread across some 60,000 churches in 144 countries.

And in the latest development, the GPdI just opened a congregation in Hong Kong. “Many Indonesians are working and living there, so this was a logical decision,” said Pastor Johannis (‘John’) Hus Lumenta, who is also the GP’s secretary general.

Among those attending today’s service is 36-year-old Mesakh Lo, an IT professional and dedicated bass, guitarist and keyboard player. “I play three instruments here in the church. I come here because this church is Biblical, there is no social doctrine. It is all about God.” He says that at times Christians may experience persecution in the capital and other cities. “But the church bombings didn’t make us afraid.” 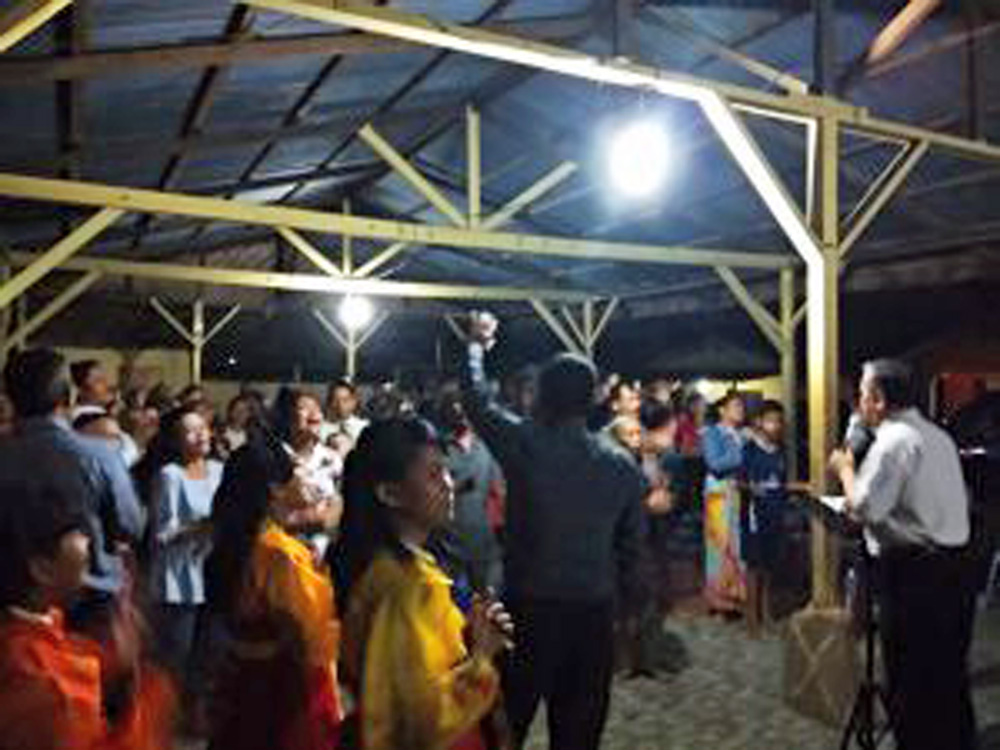 However, at a period when Jakarta is experiencing an economic turnaround, Christians face challenges such as dealing with materialism, noted fellow worshiper Lydia Lumenta, a 21-year-old lawyer. “As part of a young generation, I see that many feel they want to do anything and that they want to live freely. They may think that it is not important to be so close to God.”

Additionally, “Sometimes my friends say our church is old-fashioned. But it is very Biblical and pure. That is why I stay.” The young woman, whose father is a pastor, says being a church leader for GPdI means living without compromises. “They say here: ‘Okay, you want to be a pastor, just go, and allow God to grow the congregation.’

She hopes that the GPdI will reach more people in the villages including “those who don’t know Jesus yet or who have not a daily relationship with Him.” She is surprised that in the West many churches are empty but says that could change if youngsters turn to Christ. She wants Indonesia’s church growth to continue but cautions that much depends on her generation. “It always has to go to the next generation, but many of my friends don’t live in God. These are some of our difficulties.”

She hopes that will change. “I think if more youngsters get involved, the church will never close.” Officially, Christians comprise less than 10 percent of Indonesia’s 260 million people, but several church leaders say that real number is much higher as many Muslims have turned to Christianity. – BosNewsLife