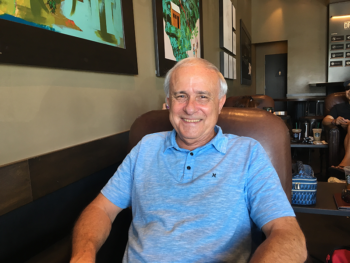 The first time Lynn Cory got cancer he developed a bad attitude. Perhaps it’s understandable, but he resented that others had a future while he was diagnosed with a particularly virulent kind of cancer.

But he did live.

Between his first and second bout of cancer, he saw Sherry, a sister deeply involved in 12 Step programs. Diagnosed with breast cancer, Sherry never flinched, never wavered, and never lowered her head. She kept ministering to others.

Her funeral was packed.

Lynn felt very ashamed of his previous gloom and doom. He felt like Sherry had shown a much more Paul-like attitude. Paul said in Phil. 1:21 “To live is Christ, and to die is gain,” and Sherry lived like she believed it.

Lynn felt so ashamed that he almost wished he could have a second round of cacer to learn to have a better attitude.

“Under my breath I said I wish I had a chance to do it right,” Lynn says. “I was joking at the time, but I got that wish.”

Hi second bout with cancer was completely unrelated to the first — it was not a flare-up of the previous cancer.

Round one was diagnosed as testicular seminoma cancer, the variety that caused the removal of one testicle from cyclist Lance Armstrong. The prognosis was pretty bleak; not much chance for survival.

“It really took me out,” Lynn remembers. “I was really shocked by this. I’d never had anything life-threatening.”

The first thing he did was the wrong thing: he started reading everything he could about it, and his growing awareness depressed him even more. Death was haunting him.

The next thing that happened was annoying. Everybody and his brother started giving him advice. There were home-remedies to eat or not eat certain foods. There were alternative medicine treatments. Everybody was a self-proclaimed expert, and the endless contradictory and confusing counsel irritated Lynn to no end.

Then after days of despair, he got the call from across the country. The biopsy changed the diagnosis, t wasn’t seminoma cancer and prospects for recovery were bright. Surgery and radiation did the trick.

Lynn resumed his duties as associate pastor of the San Fernando Valley Vineyard church, a post he held for 28 years.

Then, Lynn saw Sherry, “a remarkable woman. Sherry just went through the whole thing with the Lord. She was strong in the Lord the whole time. She never doubted. She was like Paul, whether in life or death, she wanted God to be glorified.”

Then in 2005, Lynn got the bad news again. This time it was prostate cancer.

Lynn wasn’t blindsided. He thinks he got this unrelated cancer from Agent Orange exposure in Thailand when he was in the Air Force in 1967-68. The Air Force disputes this.

This time Lynn elected to undergo proton treatment. And he kept playing racquetball.

He was launching a ministry called Neighborhood Initiative — evangelism by friendship. His staff asked if they should put on hold ministry opportunities. He declined and kept working.

“It was almost like I had an opportunity to do it again, to do it right. And I was like, ‘I’m a go for it,’” Lynn remembers. “I had such confidence at this point in the Lord. Spirit wise I was really doing well. I maintained a high level of faith.”

After 44 successive daily treatments Monday through Friday at Loma Linda in San Bernardino County, he was declared cancer free and redoubled his efforts to bring Christ to needy hearts.

Lynn has advice for anyone with cancer: Get your friends around you and pray. Don’t get people who make you doubt the treatment you’re undergoing. Get the friends who will be with you constantly and make you laugh and drive you to treatments and make you feel their solidarity.

Lynn continues to press into the Lord, pray, and trust the diagnosis downgrade was not a mistake. While the initial diagnosis may have been correct, he believes God responded to all the prayers and changed the cancer into a more benign form.

Michael Ashcraft pastors a church in the San Fernando Valley.