Born with a severe disability, no one thought she would be able to sit up, much less graduate from college, marry, and bear children.

But Melissa Davert’s strong faith in God and his plans for her life proved all the doubters wrong.

“If I ever started to feel down or sad or sorry for myself my parents would say, ‘Look, there’s a reason and a purpose for your disability,” Melissa says on a Facebook video. “’You might not know what it is now, but you will someday. You just have to have faith and trust in God and His plan.’”

Melissa grew up in a Christian home in Bay City, Michigan, one of seven children. She was born with a disability known as osteogenesis imperfecta or brittle bone disease. It results in bones that break easily, short height, loose joints, hearing loss, heart and breathing problems.

Doctors prepared Melissa’s parents for the possibility that she would never sit up on her own. But to their surprise, Melissa not only sat up, she found a skateboard and used her arms to move throughout the house before she got a wheelchair.

As a child she heard about God, but one evening she experienced Him in a personal way.

“One night I had a broken bone and I was laying in bed and prayed to God please help it be better. In the morning it was (better). It was a lot better. From then I realized He is here with me. Times will be tough but He will be here with me.”

Melissa graduated from Bay City Central High School and then attended Northwood University where she earned a bachelor’s degree in Business Administration.

Later, as an advocate for the disabled, she hosted a weekly TV program, Access Mid-Michigan, which aired on community television. She hosted the program while serving as the director of the Center for Independent Living in Midland, a position she held for more than 10 years.

She met and married her husband, Ken Davert, in 1992. Ken was born with cerebral palsy.

They never planned to have children because Melissa thought she could not conceive. Then they were surprised and excited to discover she was pregnant, but lost the baby at 12 weeks for unknown reasons.

They decided to try again. “The second time we found out we were going to have twins,” she says.

Melissa’s doctors, however, were less than enthusiastic. Medical books had no cases where a woman Melissa’s size – two-feet eleven inches – had ever delivered twins. One significant concern was that the twins might grow up into Melissa’s heart and lungs, causing her to suffocate.

Several doctors proposed that Melissa abort one of the babies. They suggested a test to determine if either baby had Melissa’s disability. They advised her to abort (kill) the baby with the disability.

“We needed something beyond science to help,” she added. That extra-special “something” was her profound faith in God. 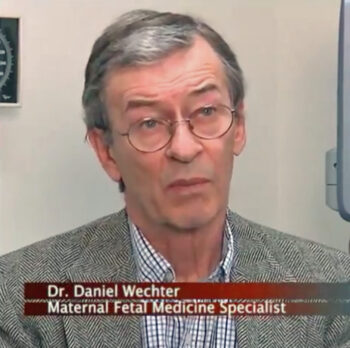 Dr. Wechter performed tests on Melissa and determined that both babies carried the same disability as Melissa.

But as they prayerfully considered their options, Melissa concluded: “Who else would take better care of them than I could?” After all, she was an expert on the condition.

Melissa decided she would walk around as much as she could during the pregnancy in the hope that the babies would grow down instead of up into her lungs.

“That’s what happened — we let gravity do its thing.”

After 32-weeks, Melissa gave birth to the twins: Michaela and Austin.

“It was the greatest joy I’ve ever felt, knowing that they were in my womb and then they were here, to begin their life,” she said.

Ken watched the birth. “It was so awesome to be in the delivery room and hear them cry when they came out and it just happened so fast. It was the greatest day of my life,” he exclaimed.

Currently, Austin and Michaela, 17, are enrolled at Davenport University. Michaela is studying marketing and also hosts her own YouTube channel where she discusses makeup and fashion. She is followed by nearly 30,000 people.

Austin has an interest in medicine and is studying health information management and volunteering at a hospital.

have a great life. Every life matters.”

“We are grateful for the things the Lord has given us.”