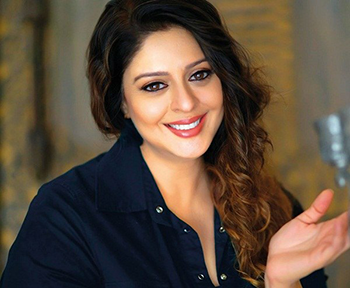 Her mom was Muslim and her dad was Hindu, but Nagma Arvind Morarji was born on Christmas Day so she identified with Jesus from an early age.

“Because I was born on Christmas, I always felt I was the chosen one and the world celebrated my birthday,” she said lightheartedly in an interview with Daystar’s Joni Lamb. “I was very intrigued with Jesus’ personality. I went to a convent school, so mass was compulsory. Somehow I felt He was my knight in shining armor.” 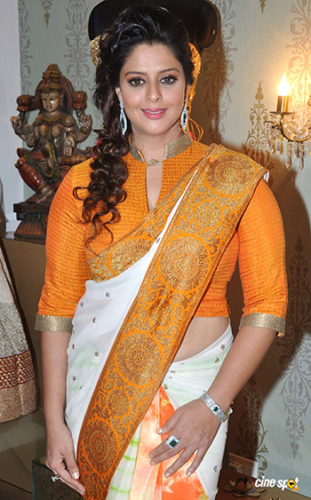 She catapulted to enormous success in Bollywood, India’s version of Hollywood, starring in such classics as Gharana Mogudu, Kadhalan and Baashha. She speaks nine languages and tried to make films in all her languages.

In the last few years, Nagma has become more politically active, fighting against sectarianism – violent clashes between Hindus and Muslims as well as persecution against Christians and other minorities. She has worked for 10 years on behalf of the Congress Party because of her admiration for Rajiv Gandhi.

“We were brought up to respect all religions. Communal riots pained me,” she told rediff.com. “I wanted to do something.”

Nagma is also using her influence to fight female foeticide (abortion of female babies) that stems from a societal preference for sons. 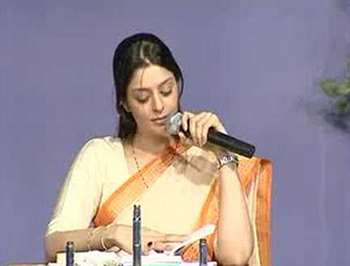 “Demographically, we are going into a very critical situation because people are killing the girl child,” she says.

Born to a father who hailed from royalty and a mother from a family of freedom fighters, Nagma was encouraged to get into movie making by her step-dad, who worked in the film industry. In 1990, she debuted in Baghi: A Rebel for Love, which became Hindi cinema’s seventh highest-grossing film.

Even from childhood, she felt Jesus’ presence in her life. “I always felt He was my friend, philosopher and guide — everything,” she says. “It was a really close bond, but not until I got saved did I realize what my relationship with Him really was.”

When her biological dad died of cancer, she lamented that she had been unable to spend more time with him due to her workload.

“That hit me hard,” she says. “God loves me unconditionally. He wanted me to realize this was a worldly relationship but that He was my eternal Father. ‘I’m not going anywhere,’ (God said). It was that love He had for me that touched my heart.”

Her father’s death shocked her. Shortly after that, she fell ill from a mosquito bite. An actor colleague’s wife who was a Christian brought her a Scripture CD.

“Hearing the Word again and again brought healing,” she says. “Every Scripture touched me. I had a lot of experiences in my life with which I could relate to every character in the Bible. I felt, ‘Wow, what is this? This is the perfect solution to any problem in life.’”

Previously, she studied Islam and Hinduism, the religions of her parents. But when she examined Christianity, she recognized its uniqueness.

“There is someone who has died for us, for our sins, and saved us so that we can live eternally,” she notes. “And He’s going to come back for us. I didn’t see that in any other religion. It is the love of God that has touched me and given me a change of heart.”

While Mohammad’s tomb occupied, only Jesus has an empty tomb, because He is risen and alive!