Charged with being a spy, Czech missionary Petr Jasek endured a 14-month imprisonment in Sudan where he was tortured by fellow cellmates. But Jesus supernaturally imparted peace during his confinement and he became a bold witness, winning many to Christ.

In his role as the Africa regional director for Voice of the Martyrs (VOM), Jasek went to Sudan to document the persecution of Christians, which was happening in the Nubah Mountains in clashes between the government and rebels.

He was detained by the Sudanese police at Khartoum Airport in December 2015. It seems immigration staff found a duplicate passport Jasek carried for security purposes, which led to his immediate arrest and imprisonment.

“I arrived at this cell at about 1:30 am,” he told VOM. He found the cell overcrowded, with people covering the floor. “They had to squeeze a little bit so they would create some small room for me to lie down on the floor.”

The conditions were sparse. “I had no blanket…two extra T-shirts and one extra pants and a toothbrush, toothpaste and soap; that was all.”

Guards refused him blankets or a mattress, because he was from the Czech Republic and they told him they thought he should be used to cold weather.

At 5:30 am he was awakened by the Islamic call for prayer. All six of his cellmates began praying fervently. “They showed me a place behind them where I was supposed to stand while they were praying. The rule is that me as a Christian, I had to stay behind them so they would not look at me while they are praying.”

After the prayers, they identified themselves as DAESH, the Arabic acronym for ISIS. All his cellmates were ISIS fighters!

“Two days later they started to openly torture me and beat me…I was hit with their fists into my face many times. They called me ‘filthy pig’ or ‘filthy rat.’”

One of the ISIS fighters barked an order: “Filthy pig, come here.”

“I decided at first I would not respond to these rude names and when I did not respond I got hit with a wooden stick they unscrewed from the sweeper that was there to clean the floor.”

Jasek was hit on the head, shoulders and fingers or they kicked him in the stomach and back with their boots. “At that time I was really thinking about the Lord Jesus what He had to go through when He was arrested and they also were beating Him with a wooden stick and were ridiculing Him, slapping Him.

“I became like their slave,” he told VOM. “I was really [made] to wash their clothes, wash all the dishes, clean the toilet with my bare hands. They were just making fun of me. I did not resist.”

“I could clearly see the Lord Jesus and how He suffered for us.”

Then Jesus imparted something to him that was amazing and unexpected, considering the circumstances. “I received a wonderful peace at that time and surprisingly, when I was physically attacked I was experiencing the greatest peace in prison time ever, all these 14-1/2 months.

“I could even pray during these beatings for my family members, I could pray for other fellow prisoners and I was not moved to the point when I used to be before, because I had this peace from the Lord at this time of the physical attacks on my body.

When Jasek began to exalt and and glorify the Lord’s name during his beatings, this made them even more furious. “They decided to torture me even in much worse way.

“Eventually, they decided to do waterboarding to me. It’s a way of torture where a person lays on his back and they cover his mouth and pour water, which gives you the feeling that you are getting drowned.

The Sudanese guards had not intervened to stop Jasek’s torture, because they were intimidated by the ISIS fighters. “It is [thought] that if these Islamists get released they will get revenge on those guards.”

Jasek didn’t have access to a Bible during his captivity, so he meditated on Scriptures he memorized as a young person.

“I was literally asking the Lord that He will keep my mind sound and that I wouldn’t lose my mind through the situation,” Jasek said. “The Holy Spirit kept reminding me some of the verses that I had memorized. This was just enough for me, to give me enough strength everyday to pray,” he told VOM.

He also thought about Jesus’ teaching about loving enemies. He was startled when he heard his abusers weeping late at night when they could not sleep.

“They were crying. They were also missing their family members. They were also crying to God for help,” he recounted. “That allowed me to easily continue to pray for them. I was praying for those fellow prisoners, the interrogators, for the guards, for the prosecutors and for the judge, that the Lord would reveal Himself as the Lord, Savior and God.”

Remarkably, one of the guards intervened to prevent the waterboarding. Jasek said he felt the Lord used the guard to move him out of the cell.

“Later on I told the guard that he saved my life and we became close friends,” Jasek said. “I gave my email address and I started to share the Gospel with him. He was very passionate. I told him that if he ever makes it to Europe, he can stay at my house and we will take care of him.”

Then Jasek was moved to another prison where conditions were even worse.

“We were squeezed in a small room — 15 by 18 feet. There were sometimes 40 of us. That was the situation and I was able to lead 40 Eritrean refugees to Christ,” he said. “It was like new revelation for me. I started to be courageous and openly shared the Gospel with other fellow prisoners. Later on, that resulted in them putting me in solitary confinement again.”

Shortly after being placed in solitary confinement, Czech consular officers were able to bring him a Bible.

“I didn’t have to do anything else but read the Bible all day. I could not read the Bible all day because I could only read when there was enough light, which was about 8 [a.m.] … until 4:30 p.m. I had to stand reading on the bars so that I could have enough light. I was so hungry for Scripture. I read from Genesis to Revelation within three weeks.”

Jasek noted that he gained a profound “new understanding of Scripture.”

He was eventually removed from solitary confinement and moved to a larger prison that can hold about 10,000 people.

“I went from solitary to a cell where there were like 100 people in one cell,” he explained. “We were squeezed. There were 75 beds. Only 75 could have a bed and 25 had to stay on the floor.”

“The first day I came to the chapel to spend time in Scripture with the Lord. They asked me to preach. I would preach once a week, sometimes twice a week,” Jasek said. “Of course, they were monitoring us and they were reporting what we were teaching about. There were two other pastors from Sudan and we knew that nothing worse could happen to us.”

Preaching in prison allowed Jasek and the other pastors to witness to “people that were hopeless.”

“They were real criminals — murderers, rapists, thieves, drug dealers. It was such a wonderful time,” Jasek said. “They responded to our teaching. We were just teaching the Gospel. It was so wonderful to see the changed life of those who dedicated their lives to Christ.” 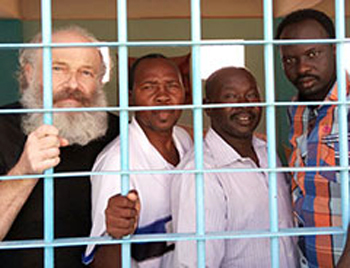 In February 2017, he was granted a presidential pardon and Sudanese President Umar al-Bashir ordered his immediate release. He returned to the Czech Republic on February 26, 2017.

During the time Jasek was interrogated by the jihadis in prison his wife was in a Bible study back home and the leader stopped the study to pray for the “situation that he is right now in.”

“They stopped reading and started to pray for the Lord’s presence over the situation,” Jasek said. “When I came home, I realized that was exactly the time when I was on my knees before the Islamists and they were beating me. But I was experiencing a supernatural peace.”

“I came for four days to Sudan. But I was there 445 days,” Jasek told VOM. “When you think about all the hardships and seeing what the Lord was able to do through us, then what else can we say but the Lord’s ways are much better than our ways.”

“We know from the words of apostle Paul that everyone who wants to live a godly life in Christ Jesus will be persecuted. I felt like I received my life back. I was first threatened to be sentenced to be executed. [Then] later on, life imprisonment. Then, my life was returned back to me. I told the Lord, ‘My life does not belong to me anymore. It belongs to the Lord.'”

To learn more about Voice of the Martyrs go here