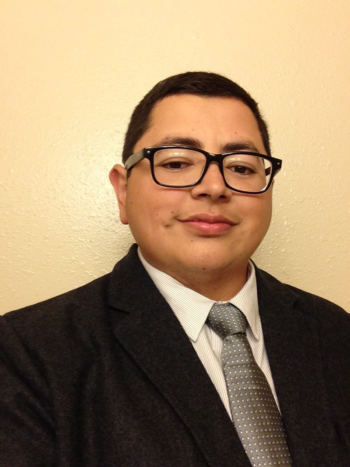 When Ricardo Hernandez was in high school, he had the body, face and brain of an eight-year-old, but he never got bullied because his older brothers were in gangs, and they watched out for him.

Born with panhypopituitarism, which causes reduced secretions of most or all of the pituitary hormones, doctors didn’t think he would survive past infancy. Miraculously, he lived. But because his brain was behind his classmates, he failed all his classes. Lacking a special education program to help him, the teachers passed him along to the next grade. Also, Ricardo was tired all the time, a result of the syndrome.

Once at the end-of-lunch bell, a kid hurrying off to class bumped into him and knocked him down with all his books. Almost instantly, a bunch of gang bangers jumped him and started beating him up. Ricardo, knowing it was an accident, tried to call off his brothers’ fellow gang members to no avail. “They told me to get to class,” he said.

In the 11th grade, his high school counselor finally put an end to the free ride and halted his graduation, suggesting he seek an independent study program. (Ricardo enrolled in continuing education later, when his body and brain caught up, and received his high school diploma as an adult.)

He had two major challenges: a slowly developing brain and chronic fatigue, which kept him from working. With not much to do but lay around most of the day, Ricardo became the object of unwanted introduction to homosexuality by a cousin who was gay. Slowly but surely, he pulled Ricardo into that lifestyle.

“I was very susceptible. I was very depressed. I had no self esteem,” Ricardo said. “I was also sexually abused by my oldest brother. He was homophobe but yet he did this act. Once I started, I went from being non-sexual to like going on a rampage. I was 21-years-old, but my mental age was 13 or 14-years-old.”

Ricardo started a relationship with a friend that lasted for two years. Kicked out by his mother for adopting the homosexual lifestyle, he rented government-sponsored housing in Pacoima with his brother-in-law.

Ricardo entered the gay lifestyle for about 13 years. Then his mother died in 2012.

“When my mother passed away, it totally destroyed what little foundation I had, and I fell into deep, deep, deep depression. I was already depressed. It got me more into wanting to end my life. I was already contemplating suicide, but after my mother’s death, it was like, ‘What’s taking so long. Get it over with already. Take courage and do it.'”

Fear always held him back — even though once he took a whole bottle of pills to no effect. The cousin who had induced him into homosexuality was abusing drugs and attempting suicide.

“I saw how the family got around him. I thought to myself, if I attempt a suicide and fail and my entire family knows that I tried to end my life, one they’ll probably make fun of me, two they’ll hover over me. I didn’t want to feel that scenario. Waking up after an attempted suicide in my mind was the worst. It would be embarrassing.”

Then near Mother’s Day in 2015, a friend came to visit that had been heavily involved in lesbianism and Heavy Metal.

She knocked on his door with a Bible in her hand, proclaiming Jesus Christ!

“Wait a minute…who are you?” Ricardo asked, incredulously.

She said she had visited a church and during the song service, God spoke to her and she started weeping. From that day, she changed. She surrendered to Jesus Christ as her Lord and Savior and found real joy.

Ricardo, however, got furious because he felt like she turned her back on him.

“I told her off and she took it like a champ.”

His friend stopped wearing black, changed her Mohawk hairstyle, and got married. She and her husband prayed for Ricardo and continued to visit him.

“She became a professing Christian, one who did what she said she did,” Ricardo said. “That shook the very core of my being,” he said. “But I told her that I could go to her church and read her Bible but nobody could ever change me.”

As Mother’s Day approached, his depression deepened. He planned to end his life when he visited his mother’s grave. He called his aunt — the closest thing he had to a mother — to wish her a Happy Mother’s Day, but she retorted, “Are you on drugs?” He hung up and cried.

He left a message on his sister’s phone saying goodbye. She was in Mexico. “I told her how much I loved her. I told her I was sorry for everything.”

That night he went into his bathroom.

Three days later, he dreamed of his mother. “I was in a white room, and my mother was sitting across from me at a big round table. She told me when I was born and she said a simple prayer (because of the doctor’s prognosis), ‘If he lives, he lives, if he dies, he dies.’ He has planned this very day. All these things have transpired so that the least of my children, He’s going to use to show what he can do — with the weakest, with the runt, with the useless, the one with no hope and no future. Satan has been trying to destroy you all these years; he’s been trying to stop what God wants to do.”

For years, Ricardo had blamed God for the unfairness and suffering of his life. But now he understood that it was Satan who was treading upon him.

In the dream, his mother told him to go through a door to a room where he would encounter God. He opened it and fell on his face.

“How? How can you do this after I’ve rejected you, after I’ve asked you for death, how is it possible? I hated you; I turned away from everything that was of you. I blasphemed. How could I be in your presence,” he said without daring to look up. “It was impossible in my mind to fathom. How could I be in his presence? The only thing I ever deserved was hell.”

God told him to stand up: “I have plans for you to prosper you and not to harm you. I’ve come not to condemn you but to give you life.”

Right then and there, God restored Ricardo’s mind and gave him a new perspective. He realized that God had been with him through all the difficult moments.

He realized God had been protecting him and defending him. He said, “I will wipe away all the tears.”

Then God told him he would wake up at 7:00 sharp. Sure enough, without an alarm, Ricardo awoke at the hour.

“What just happened to me?” he wondered. He bowed and praised God.

When his sister got back from Mexico, she called in a panic: “Ricardo, are you ok? Are you ok? What’s going on?”

She had no way of knowing his brush with suicide turned into a rebirth. He told her that Jesus Christ was real. He quoted scriptures, even though he had never read them.

“I was a new creation,” he said. “I used to have anxiety and panic attacks after my mother’s death, but not anymore. I was no longer addicted to drugs.”

Three weeks later at a deli market, he happened across the brother who had sexually abused him.

“I ran towards him and hugged him and embraced.” Ricardo said. “Before that I wouldn’t even shake his hand.

“I realized the wall wasn’t there anymore. God said to tell everyone this testimony because His testimony emphasizes forgiveness.”

Then Ricardo moved to Fresno with his sister to find cheaper rent and struggled to find a supportive, on-fire church. Without his support network of Christian brothers and sisters, he was slowly hardening in his heart. It took a girl with Down’s syndrome outside a Laundromat to jog him out of it: “You’re thirsty huh? Come to the well.”

Confronted prophetically by a person who knew nothing about him, Ricardo broke down crying and renewed his search for a church. He attended a Foursquare church and was learning the Word.

Then God told him to move to Visalia. Across the street was the Potter’s House Church, a family church with a strong emphasis on outreach and evangelism.

Even though he had low self-esteem and continued to suffer from chronic fatigue, he began attending outreaches.

Once in nearby Tulare, CA, he broke out of his shell. “All of sudden, I get this fire, and I take this mike and started street-preaching. The Spirit just took me. It was powerful”

Then God did a miracle at an outreach in Indio, CA, where it was 120 degrees, a serious danger for him given his ongoing physical weakness.

“I did the whole outreach. I was able to tap into God’s strength. After that time, whenever I felt tired, God would remind me about Indio.”

Now, Ricardo is getting off social security disability and subsidized housing. With God’s help, he’s been overcoming his fatigue, working as an Uber driver, and will be starting a job with the IRS.

He always talks about Jesus to his passengers. “I have people crying in the back seat of my car,” he said. “I have people going back to their churches. Every time I Uber, I try to share as much as I can and encourage them.”

What’s in the future for this walking miracle of a man?

“I do want to get married,” he said. “I want to get off support so I can eventually support my wife. I want to be a provider.

“God truly restores the broken-hearted,” he added. “He lifts the humble and wipes every tear away.”