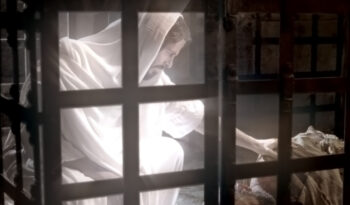 A Muslim man named Hamid found Jesus through his brother’s witness. When Hamid heard the Gospel, he accepted Jesus with his mind, but his heart was slow to experience the fullness of God’s love.

Timid about his faith, Hamid had no desire to risk sharing his new faith with others, according to a story by Frontiers.

He and his brother began to meet with a Frontiers worker named Dennis, who helped them to grow in their understanding of Jesus.

“Dennis challenged each of the men to spend quiet time with the Lord and to listen to what He might say to them through the Word. They had never learned anything like this in Islam, and they were slow to warm up to the spiritual practice,” according to Frontiers.

“For many months, Hamid and the others felt they were hearing nothing from God.”

One day, Hamid sat in a park reading the Bible. Police officers spotted him and began to reprimand him, then they hauled him off to jail.

Hamid was petrified. “He felt miserable as he lay shivering on the cold, bare floor of the cell. Throughout the night, he slept fitfully,” according to Frontiers.

Then something remarkable happened. He had a dream that Jesus approached him in the middle of the night, embraced him, and placed a blanket over him.

Hamid awakened the next morning feeling an uncommon sense of peace in the depths of his soul. For the first time in his life, he felt God’s love had touched him personally.

Then he was startled by something that defied all reason. He was covered by a blanket—the same one Jesus put on him in his dream!

There was no blanket in the cell when he fell asleep.

When the guards found him with the blanket they were stunned and frightened. They released Hamid and he returned home.

The following night, Hamid had another dream. This time, Jesus told him to share the Gospel with the first two people he saw at work the next morning.

“In the past, this would have filled Hamid with fear. He had never shared Jesus’ message with anyone before. But that morning he woke up feeling confident that he could do it. He knew he had nothing to lose. His night in prison had shown him that Christ is always with him and His perfect love casts out fear,” according to Frontiers.

Even if sharing the Good News caused Hamid any further persecution, he came to the realization that the Lord’s personal presence would be more than enough to sustain him.

Hamid obeyed the Lord’s command and shared the Gospel along with his story with two co-workers, and they immediately believed his report.

“In the following weeks, Hamid began studying the Bible with them and teaching them how to be disciples of Jesus. The experience encouraged Hamid and the other believers. They’ve begun sharing the Gospel more boldly,” according to Frontiers.

“Hamid has since started seven new Bible study groups,” Dennis says. “Nearly 40 men and women have become followers of Christ in the past year.”

Through persecution and the miraculous provision of the blanket, the Lord changed Hamid’s apprehensions and turned him into a bold witness for Christ.

This account comes from a long-term Frontiers field worker. Names have been changed for security. To learn more about Frontiers work, go here