A graphic sex education lesson offended some Oklahoma parents and students after teaching their 12-year-old children about “four types of sex.”

“I was a little taken aback and disgusted,” seventh-grade parent Stacy Gough told News9, based in Oklahoma City. “I don’t think types of sex that you can have is actually appropriate in a sex education class,” she said.

Gough’s son came to her and said, “Mom, it’s like instead of them telling us how to not do it, it’s like they gave us a road map.” 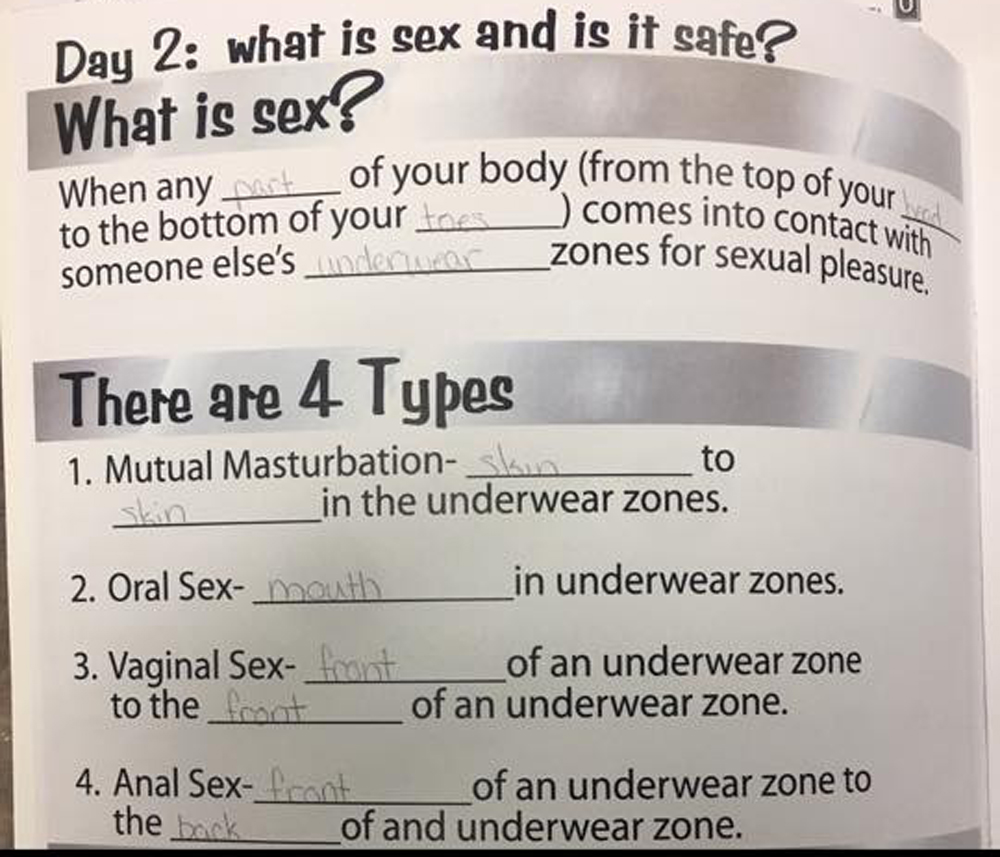 Mandy Callihan, parent to a 7th grader, who also happens to be a teacher, was alarmed when her daughter called her in tears, begging to be removed from her class.

But it wasn’t an illness that upset the 12-year-old. It was her sex education workbook.

Callihan was shocked when she opened the book and saw the graphic nature of the lessons.

She and her husband, Jake, contacted the teacher, principal, school nurse and the superintendent, according to News9.

Callihan described her daughter as confused and upset. She believes her daughter’s mind was “assaulted,” along with her moral innocence.

The teacher-mom posted an “X-rated warning” on Facebook for other parents.

“I’m so sick to my stomach over this, and I’m worried that there are a lot of parents that have no idea that this has been taking place in Jay Middle School this week (7th and 8th Grade),” she wrote on Facebook.

After Callihan opened her daughter’s workbook, she was “appalled at what someone in our school system had deemed appropriate to talk to my child about. My TWELVE-year-old child (who still colors in coloring books).

“In a room where boys and girls are combined. With male instructors (or female, depending on the time of day, I guess) who are not teachers (or nurses) in our school system.”

“Her father and I were (and still are) LIVID!”

After Callihan contacted the school she learned that pamphlets were sent home informing parents that the school would be discussing sex education.

“Signatures for permission were NOT required, but you could opt out (depending on who you talk too, because we got different answers on the permission part).”

Neither the superintendent or the principal would return Callihan’s phone calls.

“The “curriculum” you have referred to was developed by the Connection Institute, a division of LifeChoices Health Network.

“It is being (and has been) used by at least five other school districts in our area including Grove Public Schools for five years.

“It was presented in our school by the Lighthouse Pregnancy Center (Jay, OK) starting last year.

“The Jay Board Of Education approved this program last year (September 13, 2016) on a 5-0 vote as well as its presentation by Lighthouse Pregnancy Institute.

“I was not here last year; this is my first year back in OK (home) after being out of state for several years.

“I had no knowledge of this program until Thursday, October 12, 2017 and had my middle school principal discontinue the program on Friday, October 13, 2017.”