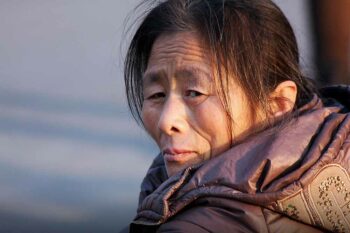 Ting made a living summoning the darkness.

As the local Shaman, villagers in her surrounding area of northwest China would seek her out for the wisdom of the spirits. And their requests were many—

Who should I marry?

What must I do to be successful?

What does my future hold?

Why am I sick?

Have I offended the spirits?

Ting delighted in her success. Word of her abilities drove thousands of the curious and desperate to seek her divine counsel, which she was eager to give. But only for a price.

And then the spirits demanded a price of their own…

Without warning, Ting’s health started to deteriorate. In just over the course of a few days, she was bed-ridden and completely paralyzed. Her illness perplexed doctors. No one had any answers, and they were running out of time. Every passing moment could be Ting’s last.

She couldn’t even speak of her agony. Or her fear of death, which seemed inches away and creeping closer.

She fell into a deep sleep. And in the midst of her slumber, she heard a voice summoning her in her dreams. Ting says—

“I was in the back seat of a taxi as my brother drove me towards an endless darkness. But then three men, who were wearing brilliant white robes, approached. But their light was so bright, I couldn’t see their faces. They told me I must make a choice. And as they spoke, two other men wearing black robes invited me to follow them. I knew in my heart one of the men wearing a white robe was Jesus. So I followed Him.”

When Ting woke up, she found she could move. Miraculously, her body was working again, and she felt her strength returning. Ting immediately remembered her dream. And she knew she’d made the right choice when she followed the man in white. In her heart-of-hearts, Ting knew He was the power behind her restored body. He was the reason she was alive. And she was eager to place her life into His hands.

So Ting immediately gave her heart to Jesus.

WILL WE WELCOME THE UNEXPECTED JESUS?

When I read stories like Ting’s encounter, many times I’m fearful—maybe even skeptical—of the experience.

Such a powerful move of God exists completely outside of my own sensibilities and theological box. And I have a tendency to not engage. To ignore it. So it won’t affect me. Because I don’t want to have to think differently. Believe differently. Pray differently. Live differently. I like the Jesus I know. The predictable Son of God.

On some level, I don’t want to welcome the wildcard Jesus into my…anything, really. Just like the people of the Gerasenes in Mark 5.

DREAMS: A VEHICLE OF THE GOSPEL

But God kept calling Ting back to my mind. I found myself on more than one occasion saying a prayer for her—asking God to protect her, inspire her and prevent her life from being wasted.

And the more I prayed for her, the more I saw her story as a testament to the “power of God that brings salvation” (Romans 1:16). Jesus had appeared to her. And He had healed her. And because of this one monumental encounter, without any other shred of evidence, she was willing to risk everything.

It would have been so easy to write the presence and power of Jesus off to coincidence. Or something entirely unexplainable. Ting could’ve just as easily gone back to the life she’d known of demons and darkness.

When her family abused her, she could’ve denied Christ, and saved herself from tremendous pain. Like the seed sown among the rocks, Ting could have given up when persecution came (Mark 4:17-19).

But she endured, holding fast to the Word of God who became flesh within her as she dreamed upon her death bed. A dream that changed everything.

And I’m confronted with the question—without God’s radical intervention, how else would Ting have believed?

FROM SUMMONING THE DARKNESS TO SERVING THE SAVIOR

Believers in Ting’s area of China face the most severe persecution. And much like Ting’s experience, the persecution is driven on a personal level—from friends, family members and the community.

Conversion to Christianity is an utter disgrace—a slap to the face of the family and a treasonous act to the community. If Christians are discovered, they will be disowned by their loved ones. And banished into exile.

Ting knew the risk. But Jesus had moved so powerfully in her life—through her dream—she no longer wanted to summon the darkness. But to serve her Savior. Our Savior.

NOBODY LIVES OUTSIDE THE REACH OF JESUS

And there are others like her, who have counted the cost and find Jesus worthy of their suffering. Even their very lives.

Many live beyond the end of the road. Far removed from much of China’s civilization—and areas where Christians experience relative freedom. And they live without access to the gospel and Christian resources.

That’s why, when our partners on the ground in these far-removed pockets of China request Bibles and Christian resources, there’s a sense of urgency. It’s important. And it’s an incredible opportunity to join with God in His miraculous work.

JESUS HAS GIVEN EACH MEMBER OF HIS FAMILY A MASSIVE RESPONSIBILITY

When men, women and families come to Jesus through dreams and visions—we still have a massive responsibility as believers in Christ to help support and equip them to live out the reality of their transformed heart.

Isn’t that what family is about? Or what family should be about? Helping each other discover the richness of Christ in each of us—our “hope of glory” (Colossians 1:27)?

When Jesus called Lazarus from the tomb, He commanded His disciples to “take off the grave clothes and let him go” (John 11:44).

Really, He was saying, “Remove the remnants of death, so the new life is free to truly live.”

His command still stands for us today. Only God can bring the dead to life—only He can save a soul for eternity. But He commands us to be a part of supporting, discipling and setting lives free to grow, flourish and thrive in Christ.

That’s why I want to pray with a greater sense of expectation. Give with more joyfulness. And serve with more selflessness. And as God accomplishes His purposes in the lives and faith of persecuted Christians like Ting—I pray He’ll rip apart the box of my faithlessness, and continue to challenge me to live a life of surprising faith so I can fully join Him in His mission.

If you feel the same, please share this story with others. — Open Doors USA

Nick passionately supports the persecuted church by leveraging his God-given gifts to share their stories with the goal of making the reality of persecution unavoidable for the worldwide Body of Christ. You can connect with him on Facebook.