A divorced mother was completely left out of the decision-making process while her teenage son, living on his own, sought and obtained help from the school and health authorities to “transition” to the female gender.

Anmarie Calgaro, of Iron Junction, Minnesota, was shocked in November to learn that her son was taking female hormone therapy, a year-long process prior to a “gender-reassignment” surgery — all aided by government agencies who never bothered to consult or inform her.

Just last week, a federal judge dismissed her lawsuit as “meritless.” She had sued doctors, social services and the St. Louis County School District for usurping her rights and responsibilities as a parent.

“We are pleased that this outcome supports her (the “transgender” teen’s) access to essential health care and other critical service,” said Asaf Orr, an attorney for the National Center for Lesbian Rights’ Transgender Youth Project in San Francisco, who aided the minor.

Enter the government. Exit the family.

Now 17, the youth, identified in court documents as E.J.K., “came out” as gay at age 13 and moved in with his dad — with permission from his mom — at age 15. But when his father was jailed, he moved in with relatives and friends and eventually got his own apartment.

E.J.K. portrayed his parents in court documents as unstable and substance-abusing, saying his mother became abusive after he told her he was homosexual. Later, the mom didn’t want to have anything to do with him when he lived on his own, he alleged.

But Calgaro said this portrayal is a distortion that was coached by gay activists.

“The news that county agencies and health service providers, the school, and other county and state officers were completely bypassing me came as a total shock.” Calgaro said in the UK Daily Mail. “Why wasn’t I even notified?” 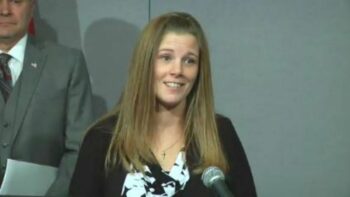 In November, Calgaro sued for financial damages the school district, the principal of her son’s high school, the director of the county’s Health and Human Services agency and two nonprofit health clinics. Calgaro also wanted to regain parental control of E.J.K. and prevent healthcare providers from offering any further treatment.

At the center of the case was whether E.J.K. became an “emancipated” minor, a legal term for a teenager who has earned the right to act as adult on his own behalf due to abuse, neglect or criminal activity of parents. Gay advocates argued that E.J.K. qualified under Minnesota law because he had rented his own apartment, worked a job while studying in high school and essentially took care of himself.

But this “emancipation” was never granted by court order, Life Site News reported.

“If there had been a court order of emancipation, then Anmarie would have received notice and an opportunity to be heard,” Calgaro’s attorney Erick Kaardal of the Thomas More Society explained. “The U.S. Constitution says that parental rights are fundamental rights, that can’t be terminated without due process.

“Her minor child has been piloted by third parties through a life-changing, permanent body-altering process by organizations that have no legal authority over him, and that have denied his own mother access,” Kaardal said.

But U.S. District Judge Paul Magnuson last week dismissed Calgaro’s lawsuit. Even though he acknowledged that the boy was not legally emancipated, the judge decreed that the school and health care facility “cannot be held liable … because they did not act under color of state law.” This means they didn’t violate any law, policy or custom, he argued.

E.J.K. turns 18 this summer, so even if Calgaro had recovered her parenting rights with the summary decision she sought, stopping the gender change might have been short-lived. But Calgaro said there are bigger issues at stake.

“I’m also taking this action for the benefit of all parents and families who may be facing the same violation of their rights—so that they and others in the future may be spared from the same tragic events,” she told NBC News.

Calgaro continues to refer to her son by his birth-certificate name and use the masculine gender pronoun, while gay advocates, Leftists and the court system use his chosen name by initials because he’s still a minor and use feminine pronouns to describe him.

Shockingly, Judge Magnuson argued that her parental rights had never been violated, according to the Minnesota Star Tribune.

Mass media cites “growing evidence” of a biological root for “gender dysphoria,” the new name in psychology for anxiety expressed by people over their sex at birth. But this evidence is scant at best, and the science appears more politicized than pure.

For example, Georg S. Kranz at the Medical University of Vienna found in 2014 “structural differences” in the brains of people who sought a “sex reassignment,” according to the New York Times. His study examined white matter in the brain, which recently has been found associated with heart disease and dementia.

But once transgender people undergo the sex change do their anxieties and suicide attempts diminish as purported by the media? A 2011 study in Sweden, one of the largest follow-up research projects, reported that transsexuals were still 19 times more likely to attempt suicide than the regular population, the Times reported.

“I was surprised to discover how many professional colleagues in this area either warned me to be careful about what I wrote or were reluctant to talk with me on the record for fear of reprisal from the transgender community,” Richard Friedman noted in the Times.

The media-whipped narrative that gender-benders have no alternative but to seek hormone treatment and surgery seems to be spilling over into the courts. And dialogue about cases such as “E.J.K.’s” lean to one side.

So at least for now, Calgaro is getting little help and less respect in her tearful attempt to help her son. Whatever her faults and struggles as a parent, did she deserve to be deprived of input in her son’s life?