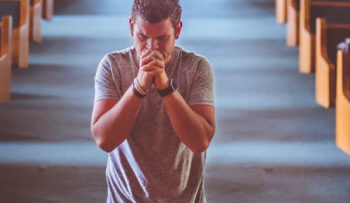 Bolos* was recruited and trained by an extremist group and was dedicated to carry out their violent attacks, including blowing himself up as a suicide bomber.

At the same time Bolos started training with the group, he also happened to discover Christian television programming supplied by SAT-7 throughout the Middle East.

When his turn for a suicide mission arrived, he stepped forward to make the ultimate sacrifice that dedicated jihadists can make.

But strangely, his suicide mission didn’t go as planned. He accidentally survived the attack. Having failed his mission, Bolos knew he couldn’t go back and face his comrades, so he fled to a neighboring country.

Then God’s great love began to pursue him. Someone gave him a Bible. The words he read in the Bible confirmed the messages he had heard on the Christian TV programming. The Holy Spirit continued to draw his heart.

Then one day, convicted by the power of the Word and the Spirit, Bolos repented of his sins and surrendered to Jesus Christ as his Lord and Savior.

Even more remarkable, he answered a call from the Lord to become a pastor. Since them, Bolos moved to a different country and has kept his location a secret for his personal safety.

Bolos overcame his sins by trusting in God’s ultimate sacrifice, allowing His Son Jesus to lay down His life for the sins of the world.