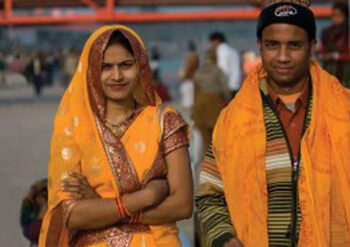 A woman in northeast India was beset by illness for many months, but after Christian workers visited her village and prayed for her and her family, a spiritual battle ensued for her soul.

“Madhu directs a discipleship-mission training in a spiritually dark area,” Galen recounted on “The Global Story,” a weekly program by Global Disciples. “He went with the disciple-makers he was training to a village where he prayed with people and they shared the Gospel of Jesus.”

The team heard about a family that needed urgent attention. It seems a young married woman named Omana had been bedridden for five months. Her family spent lots of money consulting doctors and witchdoctors but the young woman continued to suffer.

Madhu’s team visited Omana’s home and told the family about Jesus. They knelt near the woman and prayed for Omana’s healing in Jesus’ name.

“After prayer, her behavior turned strange,” Galen recounted. “She was rolling on the floor, shouting and vomiting. And her family tried to restrain her. At one point, she fled from her bed!”

Many in the village began to search for Omana and one man stumbled upon her as she attempted to hang herself from a tree. He rushed over to the distraught woman and managed to restrain her suicidal intentions, get her loose and bring her back to her loved ones.

Omana had only been home a short time when she announced to her family she was leaving again. She bolted outside and acted like she was starting a motorcycle—but there was no motorcycle.

Then God intervened to bring deliverance for the desperate woman.

“Finally, Omana fell to the ground unconscious and the demon left her! Her illness and erratic behavior caused by demonic forces had troubled her since childhood. The demons fought to maintain control, but they were no match for the name of Jesus and God’s power,” Galen recounted.

She found freedom and healing by the power of God. In response, Omana along with her husband, daughter, and mother-in-law accepted Jesus as their Lord and Savior and were baptized.

Word spread quickly through the entire village about the power of God and many marveled at Jesus, who can set spiritual captives free. “Many of them have been slow to repent and put their faith in Christ. It will take time and our ongoing prayer,” Madhu reported.

“Jesus is the only One who offers true freedom!”

If you would like to know more about the work of Global Disciples, go here