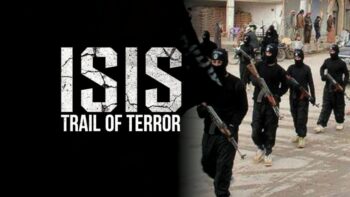 In the West, many Muslim groups such as CAIR (Council on American Islamic Relations and ISNA (Islamic Society of North America) maintain that ISIS is a deviant form of Islam.

They advance a narrative that labels Islam as religion of peace and that non- believers have nothing to fear. In their efforts to redirect any criticism of Islam, the Muslim Brotherhood even coined the term “Islamophobia” in 1991, according to a piece by Shari Goodman in the American Thinker.

“For those familiar with Quranic doctrine, the Sunna, (social, legal and traditions of the Islamic community), the Hadith (narrative sayings and teachings of Mohammad), and Sharia (Islamic law), all disclose that the embodiment of Islam is the Islamic State,” Goodman noted.

Islamic doctrine dictates a global Islamic Caliphate under the dominion of Allah and governed by Sharia law.

“It commands Muslims to achieve world dominance through dawa (proselytizing of Islam), Jihad, and the Hijra (immigration to the lands of non-believers). All three methodologies are now actively in play throughout the West,” Goodman observed.

While the proselytizing and immigration draw less attention from the mainstream media, Islamic State’s violent extremism is widely covered.

“Contrary to what the many apologetic Muslims in the West offer as an aberration of Islam, ISIS is the militant Jihad required of Muslims by Quranic doctrine,” Goodman noted. The refusal by Islamic groups to acknowledge this is an act of deception, which is allowed within the religion for advancing Islam.

ISIS, Hamas, Hezbollah, al-Qaida, Al Shabab, and other Islamic terror groups are the Jihadist military wings of “the House of War” delineated in the Quran, according to Goodman.

What Western Muslims do not openly discuss is the written text that divides Islam into the ‘House of Peace’ for Muslims and the ‘House of War’ for all non-believers.

“Since its inception, Islam has been at war with all non-believers. Wherever Islam has raised its bloody head, violence has followed. Vast areas of the globe in the Middle East, Africa and in the Far East, once home to Christians and Jews, have been cleansed of them,” Goodman noted.

She noted that nearly 66% of material contained within Quranic doctrine calls for violence directed at non-believers.

In Quranic verse 9:5 Mohammad instructed his followers to “fight and kill the disbelievers wherever you find them.” In Quranic verse 9.112 he warned, “The Believers fight in Allah’s Cause, they slay and are slain, kill and are killed.”

Likewise, Quranic verse 8:39 states “So fight them until there is no more Fitnah (disbelief [non-Muslims]) and all submit to the religion of Allah alone (in the whole world).” One particular command (beheadings) practiced by ISIS is found in sura 47, verse 4 which states, “so when you meet those who disbelieve, strike their necks until, when you have inflicted slaughter upon them, then secure their bonds, and either confer favor afterwards or ransom them.”

Members of ISIS have been fulfilling Mohammad’s commands by launching attacks against soft targets in European and American cities. “Each attack strikes fear in the hearts of the non-believers and they will continue to strike fear until either we submit to Islam or Islam is defeated. From the Quran 3:151, ‘We shall cast terror into the hearts of those who disbelieve.’”

Also, the subjugation and enslavement of Christians, Jews, and non-believers is still practiced in parts of Africa. It stems from Quranic passage 33:50 “O Prophet! We have made lawful to thee wives to whom thou hast paid their dowers; and those (slaves) whom thy right hand possesses out of the prisoners of war whom Allah has assigned to thee.”

“Many verses in the Quran encourage Muslim men to keep woman as sex slaves as Mohammad did in his lifetime,” Goodman noted.

Some will say these passages have been taken out of context or are practiced only in time of war. They ignore the fact that the Quran considers itself to be perpetually at war with non-believers until global dominance is achieved.

“Americans must begin to learn the truth about Islam. It is not a religion by any Western standard, but is instead a violent political ideology that hides behind religion to justify the slaughter of those who do not submit,” Goodman maintained.

“Unlike a tumor which can be eradicated, Islam is more akin to a cancer which has metastasized within the world body organ. Like a cancer on the world stage, for the last fourteen hundred years, Islam has taken the lives of 60 million Christians, 80 million Hindus, 10 million Buddhists, and 120 million Africans. The questions that need to be asked are why was this cancer permitted to enter our collective American home and how many more of us need to die before this cancer will be eradicated once and for all?”