A group of protesters erupted in anger when a chaplain prayed in Jesus’ name at the beginning of a February 22nd town hall meeting in Louisiana organized by U.S. Sen. Bill Cassidy.

Shortly after Louisiana State Chaplain Michael Sprague began his prayer, many began shouting out “pray on your own time” and “let’s get on with it.” Then some hecklers at the back of the room began chanting “separation of church and state,” according to the Independent Journal Review (IJR).

Not content to merely shout down the chaplain, then they began to attack a local Vietnam war veteran who came forward to lead the Pledge of Allegiance.

They screamed “we wants answers” and “do your job,” rudely interrupting the pledge. The veteran steadfastly plowed ahead until he finished his recitation.

When Sen. Cassidy reached the stage, he was also treated rudely, according to IJR.

While the name of Jesus caused a furious response, so did the name of President Trump or Education Secretary Betsy DeVos, whenever their names were mentioned.

At the end of the event, Sen. Cassidy caught up with the chaplain, saying: “Thanks for doing that, Mike. Wow, they booed the name of Jesus,” according to the Times Picayune.

“It was one of the most heinous acts of un-American, anti-Christian behavior I’ve ever 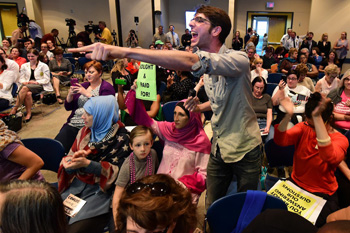 “I’ve never been shouted down throughout a time of prayer like that,” Chaplain Sprague told Starnes. “I’ve never been in a situation like that. It’s sad there wasn’t honor and respect for God.”

The angry mob became “absolutely unhinged” when the chaplain concluded his prayer in the name of Jesus. “I thought several of the agitators were going to spontaneously combust.”