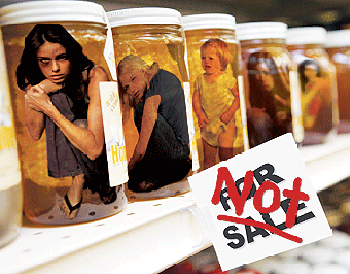 The National Center on Sexual Exploitation (NCOSE) has released its 2017 Dirty Dozen List of companies most responsible for promoting pornography and sex crimes among adults and children in homes, libraries, hotels and other places.

Amazon, the American Library Association (ALA), Amnesty International, Backpage.com, Cosmopolitan magazine, HBO, Snapchat and YouTube are repeats on the 2017 list, with the ALA and Cosmopolitan making the list the past five consecutive years. Comcast, EBSCO Information Services, Roku and Twitter are newcomers.

“The disturbing truth is that many well-established brands, companies, and organizations in America are major perpetrators of sexual harm — whether that be through pornography, prostitution, or sex trafficking,” NCOSE said in releasing its list Feb. 22. “Now, thanks to The Dirty Dozen List, we can see which well-known entities promote and profit from forms of sexual exploitation. Even better, The Dirty Dozen List gives individuals the ability to make a difference.”

In addition to the Dirty Dozen, NCOSE compiles a watch list of organizations that have pledged to make changes. That list includes the U.S. Department of Justice, Hyatt Hotels and Verizon. NCOSE relied on product websites, federal and state laws, policy statements, news articles and other communications in compiling its lists, and provides on its website endsexualexploitation.org direct links and resources to advocate for change.”The disturbing truth is that many well-established brands, companies, and organizations in America are major perpetrators of sexual harm — whether that be through pornography, prostitution, or sex trafficking,” NCOSE said in releasing its list Feb. 22. “Now, thanks to The Dirty Dozen List, we can see which well-known entities promote and profit from forms of sexual exploitation. Even better, The Dirty Dozen List gives individuals the ability to make a difference.”

The ALA is accused of “zealously” encouraging libraries to avoid using Internet filters on public-access computers, which allows patrons including children to access obscene materials unabated. “This has lured the once safe community setting of the public library into an XXX-space that fosters child sexual abuse, sexual assault, exhibitionism, stalking and lewd behavior in libraries across the country,” NCOSE said.

Amnesty International’s documented support of the full decriminalization of prostitution “prioritizes the special interests of pimps (i.e., sex traffickers) and sex buyers over the human rights of people in prostitution,” NCOSE said. Legalizing prostitution as “sex work,” as Amnesty International advocates as a measure to decrease sexual abuse, would lead to “a vibrant and flourishing sex trade” uninhibited by legal barriers.

The Backpage.com classified advertising website “brings the seedy street corners of America’s red-light districts to home computers,” NCOSE said, and “serves as a virtual auction block where sex buyers can shop for human beings for sex from the privacy of their home, office, hotel room, or cell phone…. The website facilitates this activity by editing ads to conceal the illegality of underlying criminal activity.”

Dirty Dozen newcomer Twitter “serves as a major platform to disseminate hardcore pornography and facilitate prostitution,” NCOSE said. “This site is riddled with sexually explicit Tweets and images, many of which serve as advertisements for pornography websites or online prostitution.”

Founded in 1962 as Morality in Media, NCOSE markets itself as “the leading national organization addressing the public health crisis of pornography and exposing the links between all forms of sexual exploitation.” The group lists several successes in promoting reform among former groups named to the Dirty Dozen list, including Hilton Worldwide, which NCOSE said announced plans to stop selling pornography in all of its brand contracts worldwide. The change was to be fully implemented by July 2016.

The full list and supplemental materials are available at endsexualexploitation.org. — Baptist Press