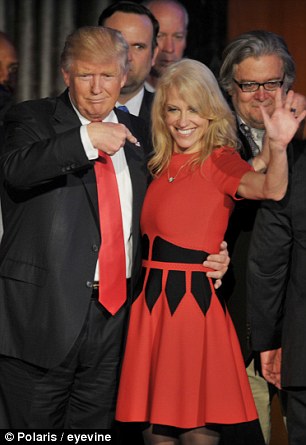 When Donald Trump gets sworn in Jan. 20, he owes a debt of gratitude to Kellyanne Conway, the first woman to run a presidential campaign, who helped turnaround a double-digit polling deficit. She also happens to be a Christian.

“It was all down to her,” Trump said. “Kellyanne has been a trusted adviser and strategist who played a crucial role in my victory.”

Conway was raised in a divorced household in Atco, New Jersey. Her deadbeat dad left when she was three and never supported her or her mother with alimony. Instead, her mother, grandmother and two sisters helped raised Kellyanne with a strong work ethic, plenty of faith and an abundance of food prepared by a mom and grandmother with Italian roots.

“They doted on me with everything that is important — love, attention, prayerfulness, patriotism, the value of being more of a giver rather than a taker,” Conway told the Washington Examiner. “Faith plays a minute by minute part of my life,” she said. “It is constant.”

She grew up picking blueberries during eight summers on a nearby farm. She picked so fast that at age 20 she even won the World Champion Blueberry Packing competition. “The faster you went, the more money you’d make,” she said. “Everything I learned about life and business started on that farm.”

Not only were her hands fast. Her brain also ran on 16 pistons. She was inducted into the Phi Beta Kappa honor society out of college and completed her law degree with honors in 1992 from the George Washington University.

Her quick intelligence earned her an invitation to join a law firm, but she politely declined. She had worked for Reagan political pollster Richard Wirthlin and had gotten hooked on the science of survey and market data. After working for pollster Frank Luntz, she launched her own polling company at age 28 in 1995.

As an entrepreneur, Conway successfully landed major clients like American Express, Hasbro, Major League Baseball ABC News and Vaseline. With conservative values, she worked for politicians Congressman Newt Gingrich and Vice President-elect Mike Pence, who served in the House of Representatives then.

In 2001, she married George Conway, a conservative New York lawyer who helped spearhead the impeachment campaign against then-President Bill Clinton. The couple had four kids and met Donald Trump after they purchased a condo in a Trump complex. She sat on the board and chatted politics with the real estate mogul between mundane decisions about property. 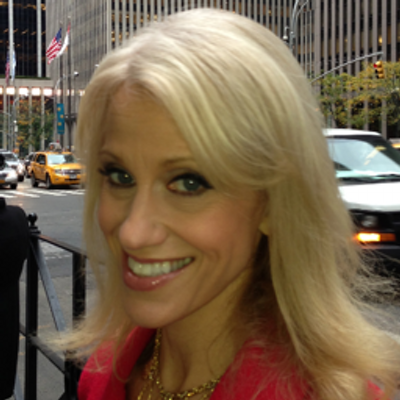 Trump’s campaign was slumping in August of 2016. The pugnacious political disruptor found himself 10 polling points behind Hillary Clinton after he verbally attacked the family of a Muslim American hero who had died saving fellow American soldiers in Iraq. The dad of Humayun Khan lambasted Trump’s immigration stance at the Democratic convention, and Trump couldn’t let the matter alone. His second campaign manager was being thrown out, and supporters were moaning about the pointlessness of working for a candidate who would shoot himself in the foot.

That’s when Conway had a private meeting with Trump and asked him why he looked miserable.

“You are running against the most joyless person in presidential political history (Hillary Clinton),” she told the candidate, according to the Washington Examiner, “and you don’t look like you are having fun anymore.”

Right then and there, Trump hired her. Conway was a political veteran and a tireless worker, but turning around the slumping campaign was a daunting task. She brought onboard Steve Bannon, publisher of conservative Breitbart News, and refocused Trump’s message. Room was made for Trump’s penchant for meeting with the people, and huge rallies were scheduled. The female campaign manager was ubiquitous on television news. Her presence and position began to win over women voters. 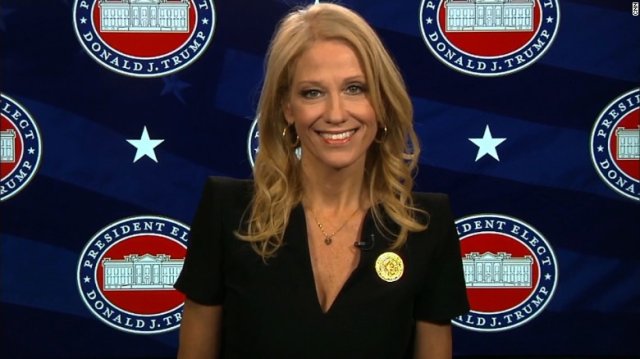 For the first time in his campaign, Trump stayed on script with an uplifting vision of America and avoided his typical barbs that got him into hot water. Conway managed what no other advisor could do: tame Trump’s tongue. Political pundits began to take note, calling her the “Trump whisperer.” The UK Guardian called her “the secret weapon that won the war.”

But Conway says the campaign had an even more powerful secret weapon: God.

“I do believe that God placed me in this position at this time to do my small part to create an environment to allow Mr. Trump to flourish and to help to create a campaign structure with our fabulous team,” she said. “This is exciting and historic in its own way, but it is nothing compared to the universe in which we live, the God that I worship, and the totality of our lives.”

Now, Conway is set to become Trump’s counselor in the new administration on Jan. 20 – which also happens to be her 50th birthday.

“You want to hear about destiny? I was born Jan. 20, 1967. I will turn 50 years old on Inauguration Day, the day he is sworn in as president,” she said. “Honestly, I think my family is very relieved that they don’t have to think of a party idea.”