Tesla and SpaceX tech mogul Elon Musk has strong opinions about artificial intelligence (AI), suggesting that AI may “summon the demon” that will put humanity at risk or turn us all into the house pets of machines.

He believes AI may be even more dangerous than nuclear weapons.

To fight the perceived dangers, Musk is planning to unveil new computers that can be placed directly in human brains, what some call “neural lace.” The phrase was first conceived by science fiction writer Iain M. Banks and refers to a way of interfacing computers directly with human thoughts.

In a January 25th tweet, Musk confirmed his firm is working on neural lace and he promised to reveal details of their research in February.

Neural lace is essentially a wireless mesh that can serve as an interface between a computing device implanted into the brain and the brain’s biological circuitry. The neural lace could potentially be programmed to control chemicals released by the brain’s neurons, enhancing intelligence, memory, and other functionality.

“Musk says that, since neurons depend on constant blood flow to function well, a neural lace could be injected into the jugular and then carried, via blood, to the cortical neurons,” noted Joe Carmichael in Inverse.com. “Such a procedure, though frightening in theory, would be far less invasive than brain surgery. Scientists already figured out how to do so in mice, and hope to do so for humans, too.” 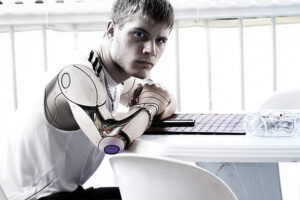 and nefarious control over the population.

According to reports in the journal of Nature Nanotechnology, experiments with neural lace conducted on lab mice show promising results.

Amazingly, mice that received the neural lace survived the procedure and were sending brain signals enhanced by the miniature computer.

Neural lace would allow people to connect to the Internet via their thoughts, rather than using their hands and eyes for access through a computer.

Last year, Musk tweeted: “Creating a neural lace is the thing that really matters for humanity to achieve symbiosis with machines.”

“I don’t love the idea of being a house cat, but what’s the solution? I think one of the solutions that seems

maybe the best is to add an AI layer,” Musk said last June. “A third, digital layer that could work well and symbiotically.”

Some tout the technology’s use for people with paralysis or degenerative diseases, because it would allow them to control bionic limbs.

“The technology would allow governments and corporations to exert a level of control which most people would consider terrifying,” noted Jasper Hamill in The Sun. “If we get computers wired into our real brains, it will force us to ask whether we are controlling it – or whether it is controlling us.”

At Vox’s Media’s Code conference last June, Musk gave voice to his drive for such a technological breakthrough. “The fundamental limitation is input/output. We’re already a cyborg, I mean you have a digital or partial version of yourself in the form of your emails and your social media and all the things that you do and you have basically superpowers with your computer and your phone and the applications that are there.”

“You have more power than the president of the United States had 20 years ago,” he noted. “You can answer any question, you can videoconference with anyone anywhere, you can send a message to anyone instantly, you can just do incredible things. But the constraint is input/output. We’re I/O bound – particularly output bound.

Musk bemoaned the speed with which humans can respond to stimuli. “Your output level is so low, particularly on a phone, your two thumbs sort of tapping away. This is ridiculously slow. Our input is much better because we have a high-bandwidth visual interface to the brain, our eyes take in a lot of data. So there’s many orders of magnitude difference between input and output. Effectively merging in a symbiotic way with digital intelligence revolves around eliminating the I/O constraint, which would be some sort of direct cortical interface […] a neural lace.”

He said the neural lace would involve a minimally invasive procedures, since “veins and arteries […] provide a complete roadway to all of your neurons, since they’re high blood flow.”

Musk is not the only one working on neural lace, according to Futurism.com.

“Braintree founder Bryan Johnson is investing $100 million to make a neuroprosthesis to unlock the power of the human brain and, ultimately, make our neural code programmable,” Futurism noted.

His neuroprosthesis will be designed to also repair cognitive abilities, allowing it to tackle neurological diseases, such as Alzheimer’s, ALS, and Parkinson’s disease.