One of the few survivors of a crash involving a Brazilian soccer team’s charter flight to Medellin was holding his Bible and reading Psalm 63 at the time of the crash.

Helio Neto, 31, was one of six survivors of the crash, which claimed the lives of 71 people, including many players and staff from the Chapecoense team from southern Brazil, one of Brazil’s top teams.

Neto is a strong Christian who carries his Bible everywhere. “Its the first thing he takes when he travels,” his wife Simone told the Daily Mail. His tattered Bible also survived the crash and was retrieved by Simone.

The British Aerospace 146 short-haul plane, operated by a charter airline named LaMia, declared an emergency and lost radar contact just before 10pm on November 28th. Authorities discovered the plane had run out of fuel as it approached the outskirts of Medellin.

The appearance of the crash scene – on a rugged mountain slope – reveals the plane smashed into small pieces. At first glance, it appears that no one could have possibly survived.

But one soccer player was hidden in the shadow of His wings.

Neto was reading Psalm 63, which says: “On my bed I remember you; I think of you through the watches of the

night; Because you have been my help; Then I will rejoice in the shadow of your wings.”

While Neto plays central defender on his team, he also had a mighty Defender in the heavenlies, an ever-present help in his time of distress.

Pulled out of the wreckage and transported to RioNegro hospital in Medellin, Neto spent nine days in a drug-induced coma and on a ventilator. He came out of the coma and off the ventilator December 9th. His first question was about the outcome of the soccer team’s game.

He had no memory of the accident, and doctors initially decided to withhold information about it until he was emotionally ready to deal with the shock.

On December 12th his medical team conveyed the news that all but two of his friends and teammates perished in the horrible crash. 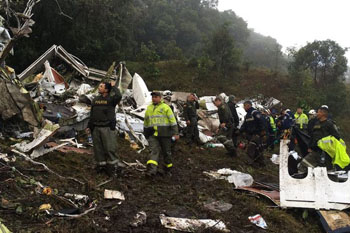 “We had a conversation with Neto, we talked about the accident. At the start, he became very emotional because he didn’t know, but he is strong and understood” Dr. Carlos Mendonca told the Mirror.

“In the last hours, he had noticed several abrasions on his body, his hand, his legs, and he was already suspicious, because it isn’t common to sustain such injuries in a football match.

The night before the accident Neto had a prophetic dream that the plane would crash.

“Probably he will talk with you about this, he had a dream the day before the trip. He dreamed that the aircraft 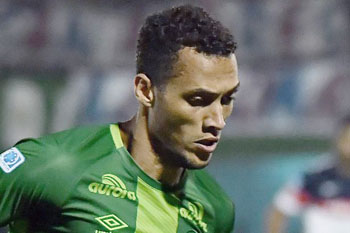 was falling, a very dramatic thing, and he told he wife that he didn’t want to fly,” Dr. Mendonca said.

“So this affected him a lot. It was a really shocking thing.”

Doctors described Neto’s condition as ‘delicate’ and he must have surgery on his lungs, skull, knees and wrists.