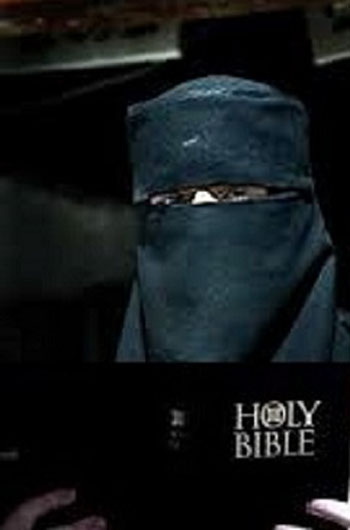 Hajira* was raised in a prominent, loving, Muslim family in the Middle East. Her father is one of the top religious authorities of the state, an enforcer of Sharia law.

“We all were strict in Sharia law and the religious practices,” Hajira told Bibles4Mideast.

Her brother commanded a militant group “protecting” Islam and taking immediate action against its enemies. He is also trained as a sharp shooter.

One evening her family, along with their cooks, drivers and servants, went out to the desert to enjoy an evening bonfire under the moonlight. It was an annual tradition, and this year, they set up camp near some rocky hills.

After dinner she went for a short walk through the desert with her brothers and sisters. Her father and mothers remained near the bonfire with the servants.

“While we were walking, I knew something bite my leg,” she recounts. “We saw a big snake moving fast after biting me.”

It seems the snake was partially covered with sand, and in the darkness she inadvertently stepped on it. “My brother took his revolver and shot the snake at once and killed it,” she told Bibles4Mideast.

It was a Sahara Horned Viper, a highly poisonous snake.

Within seconds Hajira became unconscious and they rushed her to the hospital. She lapsed into a coma that lasted four days.

When she finally woke up she was unable to move and felt severe pain. “I heard doctors discussing renal failure and increasing fibrinolysis. Nobody thought I would live.”

Listening to the doctors, Hajira began to lose hope and tried to prepare herself for death. “I turned my face to the wall and wept. I did not want others to see my tears. I prayed to God for a painless death.” Then she drifted off to sleep.

While Hajira slept, something very unusual happened. An angel appeared to her and said, “Call upon Jesus, the Son of the Most High, who was crucified and died for you and rose from the dead.”

The words of the angel irritated her. “Prophet Jesus, the son of Mary? He was not crucified; and also he was not greater than my prophet,” she told the angel, reflecting her teachings under Islam.

“You are wrong,” the angel replied. “Jesus is the Lord of the prophets. He is the true Savior. He can heal you from all sickness and save you from sin and death. Call upon Him with your heart and mouth.”

When Hajira awakened she saw her brother standing beside her. “Did you have a dream?” he asked. “I heard you were talking…something about the prophet Jesus?”

She described what the angel said in her dream. “I thought he would become angry,” she recounts, but his response surprised her.

He said he had an experience with Jesus in a dust storm when he and his team were involved in a military operation. The experience touched his heart and left him with many questions.

“My brother prayed first, then I prayed. We prayed from our heart. While praying both of our eyes overflew with tears,” she says.

Two hours later, Pastor Paul with Bibles4Mideast, unexpectedly entered Hajira’s hospital room with a friend and to their great surprise, said, “The Lord Jesus heard your prayers which you both prayed together. The angel who visited you appeared before me too and asked me to visit you, guide you to salvation and pray for you. At once I left my house to see you.”

Using the Scripture, Pastor Paul explained the Gospel to Hajira and her brother. The power of the Word and the Spirit opened their hearts to believe.

“I and my brother repented from our sins and accepted Jesus as our Lord and Savior,” she says.

Pastor Paul placed his hands on Hajira’s head and prayed. “Immediately I felt something extraordinary flowing through my veins and I got up from the bed and knelt down on the floor. Yes, the Lord Jesus totally healed my sickness and sealed me by His precious and victorious blood!”

“I told the doctors that I was healed by Jesus.” They conducted further tests and could not explain her miraculous turnaround. “Seeing my good healthy condition, my family members also believed in Jesus. Pray that our Lord Jesus protect us and give us strength to survive persecutions,” she says.

If you would like to know more about having a personal relationship with God through his Son Jesus, go here