Seven young Catholic students in Kirkuk hid under beds for eight traumatic hours while ISIS fighters used their bedroom as a hideout. They say the Virgin Mary guarded their safety during Islamic State’s assault on the city.

“The Virgin Mary was with them,” Father Roni Momika told the Catholic News Agency (CNA). Father Momika ministers in the refugee camps near Erbil.

Remarkably, the priest spoke with two of the young women by cell phone while they hid under the beds, providing a live account as the terrifying ordeal unfolded.

The seven university students found themselves in the line of fire after Islamic State attacked the city October 21st.

“ISIS entered the house of our students, the girls,” the priest told CNA.

As soon as they heard the ISIS fighters approaching, the students dove under four beds in one of the rooms, where they remained for eight hours as ISIS fighters used the room as a place to conceal themselves from Iraqi forces.

“I was speaking with them all the time,” Father Momika told CNA, noting how there was one courageous young woman who told him, “Father, I will continue speaking with you and tell you all our news and what ISIS is saying.”

The priest urged them not to forget their faith, and to “pray to the Virgin Mary, she will come to help you.”

During the eight-hour ordeal, the militants ate, prayed, and even used the beds to care for two of their wounded fighters.

“On one bed there is a lot of blood,” the priest told CNA.

It seems impossible – or miraculous – that the ISIS fighters never heard or saw the girls.

“ISIS didn’t see them!” Father Momika exclaimed. One of the girls told him later “when ISIS entered our room, they didn’t see us (and) we feel that the Virgin Mary closed their eyes from seeing us.”

The attack on Kirkuk took place during the major effort by Iraqi and Kurdish armies to retake the city of Mosul, 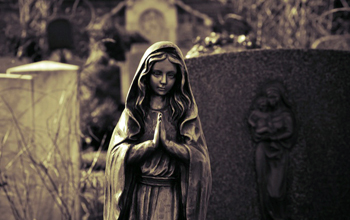 which was vanquished by ISIS in 2014 and declared a caliphate.

Some 80 people died during the Kirkuk attack, mostly security forces. Many observers believe the attack was meant to divert Iraqi and Kurdish forces from the Mosul offensive.

Father Momika told CNA the seven students were among more than 100 refugees taking university courses in Kirkuk after they were forced out of their homes by ISIS in 2014.

Although their families are living in refugee camps in Erbil, the young women wanted to continue their studies, but were unable to attend university classes in Erbil.

They enrolled at the University of Kirkuk and instead of traveling back and forth on dangerous roads, they stayed in safe houses the Catholic Church rented in Kirkuk, returning to Erbil on the weekends.

Father Momika is overjoyed the young women escaped unharmed. He also told CNA about the liberation of his hometown, Qaraqosh. The town was once regarded as the Christian capital of Iraq before the invasion in 2014, which compelled 120,000 people to evacuate in one night. Many of these believers now live in refugee camps in Erbil.

On October 22nd, Iraqi and Kurdish forces entered Qaraqosh, which is about 20 miles from Mosul. ISIS fighters had already destroyed most of the largely empty city and placed landmines along the road to Mosul.

Father Momika said that Iraqi soldiers raised the Iraqi flag in Qaraqosh, replacing that of the Islamic State.

“Qaraqosh is liberated!” he told CNA. He said there may still be ISIS fighters hiding in the city.

He said some ISIS militants “made a big, deep hole” in the ground, climbed into it and “bombed themselves” as the Iraqi and Kurdish armies marched in.

Father Momika reported that ISIS burned his church and broke all their crosses.

“It’s difficult for us because it’s our history,” he told CNA. He asked for prayer that Qaraqosh would be fully secured in the next few days.