A British-raised Jewish woman who went to Israel to help recover from shattered dreams, got more than she bargained for — she found her Messiah!

Now also a Canadian resident, Bobbie Ann Cole was living in Britain when, following the breakdown of her marriage and amidst the trauma of suffering from breast cancer, she joined a friend on a visit to Israel to find meaning and purpose to her life.

And on a heady day in Jerusalem shortly before flying home, she found herself amongst a congregation of Jesus followers to which she had been dragged, not quite kicking and screaming, by her long-time Christian friend.

To her great surprise, she was bowled over by the beautiful experience of worship at the fellowship, known as King of Kings, which subsequently developed into a personal relationship with the Lord with help from teaching at Holy Trinity, Brompton, in London, alongside a recovery course for those suffering divorce and separation.

A series of apparently supernatural incidents, including an “angelic” presence captured on camera, further catapulted her into the arms of a loving Savior.

Back in Jerusalem, a young woman from South Africa had prayed over her, saying, “Please, Lord, take this woman as your obedient bride and give her rest. And, when the time is right for her, bless her with a new, earthly husband.” 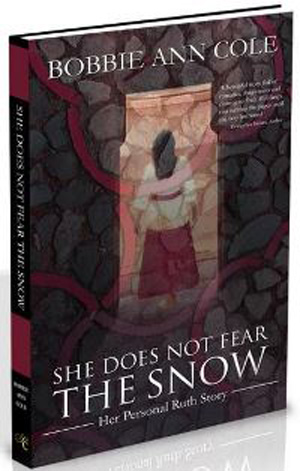 Still too raw from her break-up, she wasn’t even considering such things; she didn’t even think she could handle a date at the time. But through another series of incidents often involving split-second timing that could surely only have been divinely-inspired, she ended up starting a new life in Canada, aged 56, with a handsome man of her dreams — kind, considerate, thoughtful and caring. In fact, caring for special needs men was her new husband’s job description.

She Does Not Fear the Snow coverBobbie’s full, amazing story is told in She Does Not Fear the Snow, published by www.scrollchest.com — her new life was also a fulfillment of an earlier vision of snow and pine trees. “I had no idea that pure white landscape was my actual destination. I cannot say with any honesty that I do not fear the snow — I have seen how the winters can be here — but I enjoy making footprints,” she said.

Bobbie sees herself as a modern-day equivalent of the biblical Ruth, who came to Israel distraught and bereft, but through God’s mercy and guidance — and often by making the first move — has found her Boaz.

Initial opposition from family and friends — both to her re-marriage and new faith — was eclipsed both by the strong love they felt for one another as they courted while separated by 3,000 miles, along with their mutual devotion to the Lord.

Their story in some ways reflects the ongoing Israeli-Palestinian conflict as their road to peace and consummation has been strewn with pot-holes, but in the midst of the struggles is a divine romance which sees our Savior seeking a bride who, in the face of fiery pressure to conform to the world’s standards, keeps herself pure and faithful for her true love and one and only Bridegroom.

“Why do you have to marry him?” her family chided. “Can’t you just live with him?” Being a Christian, as opposed to a Jew, was obviously an issue, but they also believed she was being hasty and reckless.

Bobbie faced a double test of commitment, and inherited a double blessing. The call to follow Jesus is costly, and involves being more devoted to Him even than family. In this respect he had not come to bring peace, but division: “From now on there will be five in one family divided against each other… father against son and son against father, mother against daughter and daughter against mother…” (Luke 12.52f, New Testament).

But he also says: “Everyone who has left houses or brothers or sisters or father or mother or wife or children or fields for my sake will receive a hundred times as much and will inherit eternal life.” (Matthew 19.29, New Testament)

So the price is high, but the reward far outweighs it. Indeed Boaz had heard how Ruth had left her homeland “to live with a people you did not know before” and prayed that she would be “richly rewarded by the Lord, the God of Israel, under whose wings you have come to take refuge.” (Ruth 2.11f)

Marriage commitment is also costly. A good woman is “worth far more than rubies” (Proverbs 31.10). We are not called just to “live” with a woman; a bride is far more precious, and total devotion is required. In a similar way, we are not expected simply to “go” to church if we consider ourselves part of the “bride of Christ.” Jesus is looking for devoted, passionate followers who truly love him.

And so, beyond her broken dreams, Bobbie has inherited the double blessing of becoming a beautiful bride,

both of loving husband Butch and of her Lord and Messiah.

It was encouraging to read about a million Christians in Mexico “marching for marriage” in the face of attempts to “redefine” the institution there along the lines being introduced in Europe.[1]

Yes, marriages do go wrong because, although we are made in God’s image and his perfect plan is for a man and woman to cleave to each other for life as “one flesh”, we have been marred by the entrance of sin[2] into the world.

But marriages are made in heaven for those participants who join hands with their Maker in a threefold cord that is not quickly broken. (Ecclesiastes 4.12)