At least 50 Christians in the Middle East directly experienced God’s mighty hand of protection from Islamist militants when He caused a giant dust storm to hide them from their attackers.

The story of divine protection began with a baptism held in secret.

“By the ever loving grace of God, 24 believers of Jesus Christ from Islam received baptism in the Middle East,” says Pastor Paul, founder of “Bibles for Mideast”.

The new believers had approached Pastor Paul and asked to be baptized. Overjoyed that they are now part of the Bride of Christ, they wanted to be purified by the water and the Spirit to meet the Bridegroom – Jesus Christ, whom they believe is coming soon in the clouds to take His Bride.

“Our Lord’s return is imminent, they all believe,” Pastor Paul notes.

After three days of prayer and fasting they obeyed the commission of the Lord in the Arabian Sea.

About 50 people, including the baptism candidates, boarded a bus that took them to the appointed spot. They had been instructed to keep their plans secret.

“After the baptism service and prayers, we all entered the bus to return back to our house church for a worship service and the Lord’s Supper,” Pastor Paul recounts.

The bus started moving. Suddenly three cars filled with Islamic militants came speeding up behind the bus and started shooting at them.

“We kept secret about our baptism service,” Pastor Paul notes. “We don’t know how it was leaked to the militants.”

Pastor Paul believes it was the militants plan to kill them during the baptism service. But somehow, they misjudged the timing of their arrival.

A wild chase began, as the bus driver and the cars picked up speed on the two-lane road. “We really did not 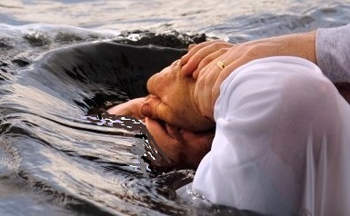 know what to do, but started praying to the Lord for His mighty protection.”

The young bus driver picked up speed. “The militants also followed us with the same speed. People thought we all would be murdered,” he recounts.

But then something very unusual happened.

“Suddenly we saw a giant dust storm form behind our bus,” Pastor Paul says. At first they were afraid when the dust storm appeared. They thought the storm would envelop the bus and they would be forced to stop, which would cause the terrorists to overtake them.

“We thought we may not be able to go any further and would be held by the militants,” he says.

But, the dust storm surrounded the militant’s cars, not the bus. “We again heard the gunshots towards us. But we didn’t see their vehicles behind us any more.”

As some looked back at the dense cloud, they saw a beautiful vision.

“Praise the Lord! We all felt that the Lord Jesus Christ appeared on the dust storm as a Mighty and Wonderful Man showing His protecting and lovely hands towards us with a sweet smile.”

Pastor Paul knows where his help came from. “Jesus saved us. He Himself blocked the path of the militants in the form of a dust storm.”

With gratitude to God they arrived at the house church and lifted up praised to the Lord.

“We thank our Lord Jesus Christ for showing His love and care towards His children. Thank you and Praise you Lord.”