A small onyx stone, said to be a gift to a Knight Templar over 1,000 years ago and handed down within a family, may actually be what the owner asserts: a gem originally worn by the High Priest in Jerusalem.

The astounding report – corroborated by a number of independent experts – was contained in a story by Adam Berkowitz in Breaking Israel News.

According to the Talmud (Yoma 21b), the precious stones worn on the High Priest’s garments were lost when Jerusalem was sacked by the Babylonians.

“And you shall put the two stones on the shoulder-pieces of the ephod, as stones of memorial for the sons of Israel; and Aaron shall bear their names before the Lord on his two shoulders for a memorial.” Exodus 28:12

Experts believe this is one of the stones missing for centuries. If restored to the right hands, it could play a role in returning the priestly caste to serve in the Temple, according to Breaking Israel News.

In 2000, Dr. James Strange, a professor in religious studies at the University of South Florida, traveled to South Africa to meet with the family in possession of the stone.

Dr. Strange earned his M.Div. from Yale Divinity School in 1964, and a PhD. in New Testament Studies from Drew University in 1970. He was a Montgomery Fellow at the W.F. Albright Institute for Archaeological Research in Jerusalem in 1970-71 and NEH fellow at the same Institute in 1980.

When Dr. Strange first met with the family he was not taking their claims about the stone seriously. But he was astonished by what they showed him. “I was indeed amazed at the gemstone,” Dr. Strange told Breaking Israel News. The stone itself was nothing special, a semi-precious sardonyx, with little intrinsic worth.

But the object he held in his hands confounded Dr. Strange. “I was unaware that anyone in the late Middle Ages 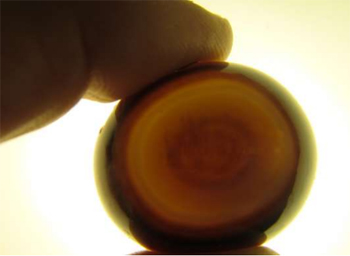 had the technology to cut a hemisphere in such a medium, so I tried to exhaust all other explanations,” he said.

Even more amazing than the stone’s cut was the mysterious inscription buried within the stone, visible through the clear surface: two letters in ancient Hebrew.

Dr. Strange wrote in his appraisal of the gem, “There is no modern or ancient technology known to me by which an artisan could produce the inscription, as it is not cut into the surface of the stone.”

Dr. Strange asked for assistance from Ian Campbell, Director of the Independent Coloured Stones Laboratory in Johannesburg and a leading South African gemologist. Campbell was equally dumbfounded by the unusual features of the stone, according to Breaking Israel News.

Dr. Strange initially thought the owner’s story placing it on the High Priest’s garments was inconceivable. But the family had documentation that traced its descent from a Crusader-period male ancestor who was in the Holy Land in the Middle Ages and claimed the stone was a reward from the High Priest.

According to the Auret family tradition, the ancestor, named Croiz Arneet deTarn Auret, received the stone from “the High Priest” in gratitude for his part in freeing Jerusalem around 1189.

The stone was passed down within the Auret family through the male line until the nineteenth century. That tradition was broken when Abraham Auret died in 1889, leaving the stone to his daughter, Christina.

After her marriage to William Hurst, the stone left the Auret name, and was passed from mother to daughter. The

family’s genealogical reports substantiate the story. Currently the stone is in possession of an elderly woman in South Africa, who wishes to remain anonymous, according to Breaking Israel News.

The family’s oral tradition is that God’s hand inserted the mysterious inscription inside the stone.

Dr. Strange noted the stone had no external markings, so it wasn’t set in a ring or a necklace. He concluded it was probably part of a large plate or breastplate. He dated production of the stone to approximately the 5th century B.C.

Considering the stone’s unique historical significance, he appraised its value at $175-$225 million, according to Breaking Christian News.

Ian Campbell, the gemologist, photographed the stone with a microscope, confirming it had not been cut open to make the inscription.

The professor, an expert in ancient Hebrew and Arabic epigraphy, was amazed to see clearly inside the stone itself, two letters in ancient Hebrew. The letters seemed to be engraved or burnt into the heart of the stone.

“Due to the clarity of the letters and their fine definition it would be incredible if they are a coincidental natural formation in the stone,” he stated in his notarized report. “The lack of any apparent sign of interference with the surface makes the existence of the letters inside the stone a real enigma.”

He noted the inscriptions in ancient Hebrew script of what he described as “the equivalent of our ‘B’ and ‘K’.” He identified the style of script, dating it to be from the year 1000 B.C., according to Breaking Israel News.

In 1994, Dr. Joan Westenholz, Chief Curator at the Bible Lands Museum in Jerusalem, examined the stone. She concluded, “It is a unique object that has no similar or identical counterpart; it is the only one of its kind in the world.”

Dr. Westenholz estimated the date of the stone’s production to be approximately the 7th century B.C. She noted the inscription “in the shape of a possible letter is a ninth century form of an archaic Hebrew letter bet.”

In her notarized report, she observed next to the letter bet “what can be perceived as the image of a wolf.” She

noted that the wolf corresponded to the blessing Jacob gave Benjamin before Jacob’s death.

“Benjamin is a ravenous wolf; in the morning he devours the prey, and in the evening he divides the spoil.” Genesis 49:27

Dr. Westenholz and Ian Campbell have since passed away, but Breaking Israel News verified their statements and documentation as genuine.

Dr. Strange called for new examination of the gem. “I think this object needs a new appraisal and as many scientific tests as possible to determine whether it is genuine,” Dr. Strange told Breaking Israel News.