Billy Graham, Adrian Rogers and Southern Baptist Theological Seminary administrator Dan Dumas are among the Christians who have told of Gospel conversations with the late heavyweight boxing champion Muhammad Ali.

According to the Associated Press, Ali occasionally attended King Solomon Missionary Baptist Church in Louisville, Ky., where his family worshiped, even after his conversion to Islam. However, he will be honored in a Muslim funeral June 9 and a public memorial service led by an imam June 10.

Concern over Ali’s religious beliefs once led his father to take the boxer to visit evangelist Billy Graham at his home in Montreat, N.C., Graham’s son Franklin wrote in a June 4 Facebook post.

Ali’s father, Franklin Graham wrote, “was concerned over Ali’s faith in Islam and was afraid that his son had been led astray.” Graham and Ali “had a great visit, and my father had prayer with him.”

Billy Graham wrote of the 1979 meeting in his autobiography “Just As I Am,” “I autographed a Bible for him. He accepted it graciously, but when he looked at my unreadable scrawl, he asked [longtime Graham associate] T.W. [Wilson], ‘What does that say?'”

Ali handed the book back to Graham and said, “How about printing ‘Billy Graham’ under that. I want people to know it’s you when I show it to them.” As Graham recounted, “I laughed and printed my name in big letters.”

Ali said of the encounter according to Russ Busby’s 1999 book “Billy Graham: God’s Ambassador,” “When I arrived at the airport, Mr. Graham himself was waiting for me. I expected to be chauffeured in a Rolls Royce or at least a Mercedes, but we got in his Oldsmobile and he drove it himself. I couldn’t believe he came to the airport driving his own car.

“When we approached his home,” Ali continued, “I thought he would live on a thousand-acre farm and we drove up to this house made of logs. No mansion with crystal chandeliers and gold carpets, it was the kind of a house a man of God would live in. I looked up to him.”

Franklin Graham said the two men “met together again several years ago in Louisville, Kentucky, when my father was there to preach.”

Rogers, a former Southern Baptist Convention president, told in at least three sermons between 1986 and 1994 of sharing the Gospel with Ali. Rogers died in 2005.

In a 1994 sermon, Rogers, longtime pastor of Bellevue Baptist Church in Cordova, Tenn., said Ali had asked him, 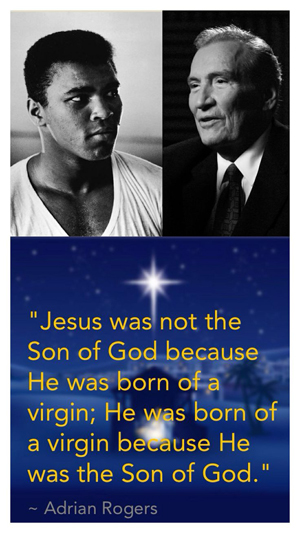 “How can you believe that Jesus is the Son of God, the unique Son of God? Just because He was born of a virgin? Why, Adam didn’t have a father or mother. Wouldn’t that make Adam more son of God than Jesus?”

Dumas, senior vice president for institutional administration at Southern Seminary, tweeted following Ali’s death, “In 1992 in NYC, I spoke the Gospel to Ali & gave him a tract. In kind, he gave me a signed tract for Islam.”

On the tract, called “Understanding Islam and the Muslims,” Ali wrote, “To Dan from Muhammad Ali.”

Dumas told Baptist Press Ali “seemed hostile to the Gospel” during their encounter, which took place at LaGuardia Airport while Dumas was on his way back home from a mission trip to Ukraine.

Dumas noted, “I could only hope he responded somewhere along the way, if not on his deathbed, to the Gospel.”

Ali will be buried at Cave Hill Cemetery in Louisville, where Southern Seminary’s plot includes the graves of Southern founders James Boyce and John Broadus among others. — Baptist Press

More than 8K Christians remain in Afghanistan, many in hiding