The nation was horrified by the loss of two-year-old Lane Graves after he was snatched at the edge of a lagoon by an alligator in front of his parents at an upscale Disney hotel only a monorail stop away from the Magic Kingdom.

A troubling dimension to the loss of a child is the question of their eternal destiny. There will be comforting words from friends, but some will be left wondering if they will see their little one in heaven.

One of the most famous sermons ever delivered by Dr. J. Vernon McGee, the legendary pastor and Bible teacher with a Texas twang, addressed this important question.

The subject was close to his heart because the McGee’s first child was stillborn.

“There is no sorrow quite so heartrending as the death of a little child,” Dr. McGee affirmed. “The image of the little one is written so indelibly upon the mind and heart that during the long watches of the night it appears on memory’s screen to haunt us.”

From talking with other grieving parents, he knew that if the child lived long enough to walk and to talk, their memory left “a lingering fragrance in the home” that now was strangely silent too soon.

The grief was palpable. “The arms are empty, the eyes are filled with tears, and the heart is like a vacant house,” he said.

Yet he and his wife fell into the arms of the Comforter, the Holy Spirit, whom he trusted would apply “strong splints and sweet ointment” to their wounded spirits.

Importantly, Dr. McGee came to the realization that a brief life is not an incomplete life. “We sometimes feel that a life which was so brief was in vain and that God has mocked us by giving us the little one and then by taking it away immediately.”

Even if the child never grew old enough to marry, have children, or make their mark in the world, an eternal perspective is important. “Remember that the little one had an eternal spirit and that it has gone into the presence of God where there will be an eternity to perform works and develop character,” he observed.

Dr. McGee recognized a God-appointed purpose in a relatively short life. “The child’s presence turned your thoughts to the best. Your little one’s helplessness brought out your strength and protection, and your child’s loveliness roused your tenderness and love. The little one’s influence will linger in your heart as long as you live.”

Children are often remarkable soul-winners. “If anything can bring a man to God, it is a child,” he said. “‘A little child shall lead them’ is not idle rhetoric.”

In the Bible, when Bathsheba’s child was dying, shortly after birth, David fasted and sought the Lord to spare the newborn.

But after he learned the terrible news of the baby’s death, David picked himself off the floor, washed, anointed himself, changed his clothes, and went into the Temple and worshiped.

David’s servants were completely perplexed and asked about the change in his demeanor.

“While the child was still alive, I fasted and wept; for I said, ‘Who can tell whether GOD will be gracious to me, that the child may live?’ But now he is dead, why should I fast? Can I bring him back again? I shall go to him, but he shall not return to me. (2 Samuel 12:16-23)

The child’s eternal destiny was not in question to David! “David knew that the child was with the redeemed and that he would join him someday by death and would be with him forever.”

The Graves family should have the assurance of the salvation of their child; little Lane is “safe in the arms of 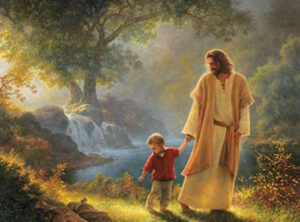 “You would be willing to turn over your child to the care of a faithful nurse in this life, and you can rejoice that your little one is in the arms of the Good Shepherd who is more tender than any human nurse,” Dr. McGee said. “In fact, the little one is better off than if it were asleep in its crib in your home.”

In the book Heaven is for Real, four-year-old Colton Burpo had a near-death experience and was given a remarkable visit to heaven, where he described meeting a sister he had never met, who was miscarried by his mother.

“There are ‘gobs’ of children and babies in heaven,” Todd Burpo related in an interview shortly after the book was published.

“The women in heaven – especially Mary – are involved with raising the kids,” he said, based on his son’s account. “A lot of the ladies in heaven help these children, they raise them and they’re with them.”

While the account may seem fanciful to some, it’s clear that Lane is beyond the veil of tears. There is no dangerous predator who can harm him now.

“We may rest in the confidence that our children are safe with Christ,” Dr. McGee said. “Remember that when He was here on earth, He took up little ones into His arms, saying, ‘Let little children to come unto me, and forbid them not; for of such is the kingdom of God.’ (Luke 18:16)

“On another occasion He said, ‘Take heed that ye despise not one of these little ones; for I say unto you that in heaven their angels do always behold the face of my Father, who is in heaven.’ (Matthew 18:10)

Jesus went ahead of us to prepare a place for those who are His own. “Part of this preparation is the taking of your child. Heaven will mean more to you now, because your dearest treasure is there.”

Dr. McGee did not realize how many parents had lost children until their first baby was taken. “One after another in the congregation came with tears in their eyes to tell of their secret sorrow,” he recounted.

While difficult to comprehend, God permitted the tragedy in Florida to happen. “Somehow and some way God will make this work out for His glory and your good.”

 Perhaps the Lanes think they might have done something more to have prevented the tragedy. “You may be harassed by a haunting fear that you did something wrong. Martha and Mary felt that the death of their brother could have been averted,” he said.

Did God save Lane and his family from some future grief? Dr. McGee observed that many grow up and enter into a life of crime or shame, bringing suffering to their parents. Others become victims of violence, warfare, or terror.

 ”God knew what was in the future for your child. Perhaps there would have been a life of illness, a disfiguring accident or brain damage, or a lingering, incurable disease. God knew all of this, and I am confident that He has given you the better part. You can be certain about your child’s future now.”

If Lane’s parents have trusted in Jesus as their Lord and Savior, then they will see their little one some day.

“If you are in Christ, you at that time will be reunited, and together you will be at home with Christ forever.”

     ”What an added joy this lends to heaven in looking forward to having your little one again! Remember that David expected to go to his child. And referring to children Christ said, ‘Of such is the kingdom of heaven.’”

“His comfort is real; His presence is vital; His words are life. He can become a mighty reality to you now. He wants to enter into your sorrow and sympathize with you.”

Dr. McGee shared a story about a custom among the shepherds of the Alps.

“In the summertime when the grass in the lower valleys withers and dries up, the shepherds seek to lead their sheep up a winding, thorny, and stony pathway  to the high grazing lands.

“The sheep, reluctant to take the difficult pathway infested with dangers and hardships, turn back and will not follow. The shepherds make repeated attempts, but the timid sheep will not follow.

“Finally a shepherd reaches into the flock and takes a little lamb and places it under his arm, then reaches again and takes another lamb, placing it under the other arm. Then he starts up the precipitous pathway. Soon the mother sheep start to follow and afterward the entire flock. At last they ascend the torturous trail to green pastures.”

“The Great Shepherd of the sheep, the Lord Jesus Christ, our Savior, has reached into the flock and He has picked up your little lamb,” Dr. McGee said. “He did not do it to rob you but to lead you out and upward. He has richer and greener pastures for you, and He wants you to follow.”

Trusting in Jesus, the Graves will see their little lamb some day.

For the full text of Dr. McGee’s sermon, go here