As a Christian counselor with one of the largest practices in the Chicago area, he came to a startling discovery after walking with Jesus for many years.

“Something profound happened inside of me between my convictions and my heart – there was a major disconnect,” says Rich Blue, founder of the Center for Christian Life Enrichment in Northbrook, Illinois and author of Surprised by God: a Journey of Divine Discovery (HigherLife).

As a child, he endured an abusive, alcoholic father with anger issues. “I remember one time my father beat me with his belt because he heard me swear. I couldn’t get away from him. He went into a rage. I don’t remember him stopping. I thought that happened with everyone,” Blue recounts.

He also developed an inappropriate level of closeness with his mother and became “sort of a husband to her” in ways that were damaging.

In high school and college, he was drawn to contact sports like football and rugby, partly as outlets for the jumble of hurts and feelings hidden inside. “I remember reading about Dick Butkus, that he was such a beast, and I realized I thought the same way,” Blue confesses. Butkus, a legendary linebacker for the Chicago Bears, was known as one of the fiercest players in the NFL.

“I had secrets buried inside me and I thought I was going to heal myself,” he says. “Who teaches you how to take care of yourself when your feelings are hurt?” he wondered later.

His tough exterior masked inward fragility. “As strong as I was physically, I was weak interpersonally. I would get my feelings hurt. I would feel devastated. When I couldn’t physically ‘kill’ someone (in sports), I felt powerless, defenseless.”

In his counseling practice, he discovered he was not alone in being out-of-touch with his inner feelings. “Most men experience deep pain and hurt all day long and deny it,” he recognized.

When he looked in the mirror, he felt disconcerted. “I realized my god had been myself, and how much I relied on my image and being liked and respected and looked up to,” he says. “I came off as nice. It took me a long time to recognize the ways I can be insincere or un-genuine. I was trying to manufacture acceptance, feel like I belong.”

Ironically, some of Blue’s epiphanies in dealing with his “disconnect” happened through quasi-New Age counseling at the Wright Graduate University for the Realization of Human Potential, founded by Dr. Robert Wright.

“I ended up going to this crazy place that scared me to death, with very bright people who were more socially 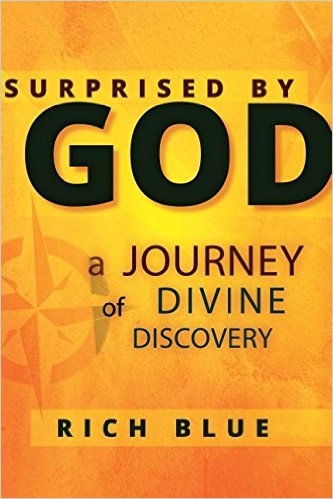 mature than I was. I was the only Christian in these environments,” he says.

“Bob Wright was challenging me and constantly pushing me about being inauthentic. He told me to my face that he didn’t trust me because I refused to tell the truth about when I was hurt, when I disagreed with someone, or when I was angry.”

One day Wright asked Blue, “Do you believe in a loving God?”

“Then why don’t you love yourself?” he asked.

He realized he was not used to having someone in his life that was so direct and straightforward. “Historically, I had surrounded myself with people who were very careful and sensitive,” he observes. “They were more concerned with not hurting my feelings than in telling me the truth.”

“Bob introduced me to the life-transforming power of truth spoken with the intent to support me in becoming my most Christ-like self – though I have attempted to soften and sweeten his approach as I have used it with others.”

Blue recognized that some of Wright’s techniques “can go in the wrong direction,” but he appreciated that Wright was willing to confront him, tell the truth, though it hurt his feelings. In this laser-like truth telling, he thought they “were reflecting the spirit of Christ.”

As Blue introduced some of his newfound understanding into his practice, not everyone reacted well. “I had a core group of people turn against me. It was like a church split,” he says.

“People were up against stuff they didn’t want to face. The love and adoration they had for me flip-flopped. It became anger and distrust and a full-blown attack. Being authentic became a high value for me.”

Blue says that many Christians are confused about anger. “If you read the Gospels, Jesus was angry a lot,” he notes. “It is much more vulnerable for you to tell me you are angry with me than to say you miss me or love me.

“The problem isn’t really with anger; the problem is with personal maturity. People don’t learn how to express their anger; they haven’t been potty trained with respect to anger. You have to know how to channel it.

“I have a pastor’s group I’ve led for 20 years. These guys are like going to war with no weapons if they don’t have access to their anger. Their parishioners are often hurtful and demanding.”

Anger allows someone who is victimized to stand up for themself, to set boundaries, to take care of themself, to say no, or stop, or ‘I don’t like that.’

Blue came to realize he had been expressing his own anger and disapproval in a passive-aggressive way.

In Blue’s book, he breaks down his process of growth and development as he incorporates an anchor Bible story in every chapter, and weaves in life experiences.

“God has became bigger and bigger in my life. My God was too small in my own mind, too limited, one I wanted to control. I was avoiding tough questions.”

“We encourage people to look deeply and figure out what they really believe. Put it to the test if you believe God is loving. I want people to know how they relate to other people and build authentic relationships.”

To learn more about Rich Blue’s counseling practice and his book, go here