In a gruesome display of misplaced bravado, Fatah’s official Facebook page posted a drawing of a knife held over a map of “Palestine” that includes all of Israel and the PA areas to commemorate three attacks that took place March 8th.

In one of the attacks, Palestinian terrorist Bashar Masalha ran through the streets of Tel Aviv-Jaffa, stabbing every civilian he passed, killing Force and injuring 11 in the gruesome, 20-minute attack.

Force was walking on a boardwalk when the 22-year-old terrorist stabbed him, part of a spree that apparently targeted civilians at random. No one else from Vanderbilt was injured.

Force was in Israel to study entrepreneurship with his Vanderbilt business school classmates as part of his MBA program. He was the only victim killed.

In high school, Force became an Eagle Scout before he turned 18. The descendent of several generations of soldiers, he went on to graduate from West Point. At West Point, he received his bachelor’s degree in engineering and industrial management and was also a member of the ski team, according to LinkedIn.

He served his country with distinction in Afghanistan and Iraq, and made it back from the hostilities without any personal scars, according to Fox News.

“He was such a hard worker, an Eagle Scout, and loved by everybody,” his father, Stuart Force, told Everything Lubbock.

On the Vanderbilt trip to Israel, there were 29 other students and four staff members.

“This horrific act of violence has robbed our Vanderbilt family of a young hopeful life and all of the bright promise that he held for bettering our greater world,” Vanderbilt Chancellor Nicholas Zeppos wrote in a statement.

Official Palestinian Authority TV reports described Force and the other victims as “settlers.” The PA often calls all Israeli cities – “occupied” – and all Israelis – “settlers” – a category of people they have claimed that international law gives them the right to murder, according to Palestinian Media Watch (PMW).

By calling the American a “settler” — even though he is not Israeli, the TV news attempted to shift the blame to the victim, PMW reported.

PA TV likewise honored the killer calling him an Islamic Martyr: “A complex operation was carried out in Jaffa, or more precisely in the Jaffa port, by the Martyr Bashar Masalha, 22… in which 12 settlers were hurt, among them an American tourist who was killed, according to the Hebrew sources.” 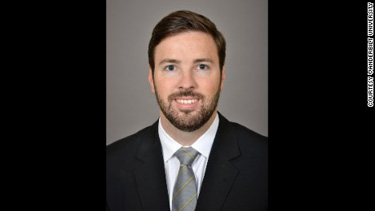 attacks (see below), posting their pictures with the following text:

“Happy are the Martyrs #Continuing_toward_true_freedom_and_honor”

Yet another post by Fatah glorified the three terrorists as follows:

“In the Martyrs’ homeland and on the day the Martyrs are roses, flying to their Creator, to Allah’s mercy. O the pride of all of the young Palestinians, may your blood remain a source of true honor for the homeland for which you sacrificed all – even your precious lives. We promise you that your blood will continue to be a torch that illuminates our path, until we achieve what you died for as Martyrs. Your blood has taught us a lesson in the school of life: #The_homeland’s_honor_is_above_all” [Official Fatah Facebook page, March 8, 2016]

Bashar Masalha – 22-year-old Palestinian terrorist who carried out a stabbing attack, murdering Taylor Force, an American tourist, and injuring 11, in Tel Aviv-Jaffa on March 8, 2016. Masalha was shot and killed by Israeli police.

Fuad Kassab Al-Tamimi – 25-year-old Palestinian terrorist who carried out a shooting attack, injuring 2 Israeli policemen, at the Damascus Gate in the Old City of Jerusalem on March 8, 2016. Al-Tamimi was shot and killed by Israel policemen.

Abd Al-Rahman Raddad – 17-year-old Palestinian terrorist who carried out a stabbing attack, injuring 1, in Petach Tikva on March 8, 2016. The victim pulled the knife out of his neck and killed Raddad with it.